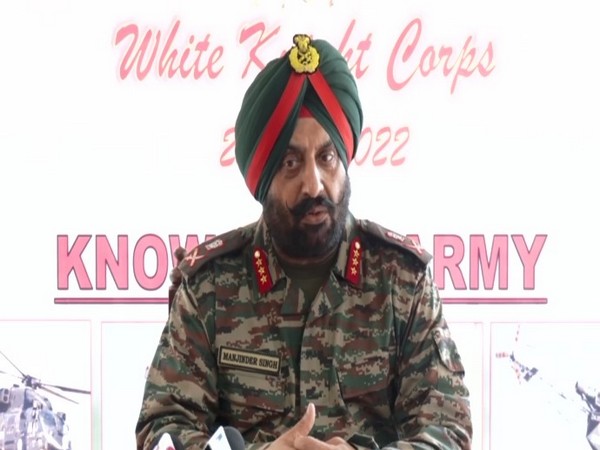 "There is a lot of support from locals against terrorism. So far, the violence in Jammu is significantly low and if someone came from the valley side, he has been neutralised," Lt Gen Manjinder Singh said addressing a press conference in Jammu's Nagrota. "Pakistan is trying infiltration, terrorists, ammunition and narcotics, but we have a strong anti-infiltration grid and secondly we are concentrating on securing hinterland for which we have a strong anti-terror grid," he added.

Further, on the concern for drone threat, Singh announced the launch of an anti-drone mechanism while mentioning that the drone threat is more in Punjab and in the plains.

"There is less sighting for drones in our (White Knight Corps) areas and we suspect the ones seen here are a reconnaissance by the enemy, hence we are soon getting an anti-drone mechanism," he said.
"In the last two years, there has been no successful infiltration along the Line of Control (LoC) in the areas under White

Knight Corps of the Indian Army," he added.
Addressing further, he said that the Army is taking a number of initiatives that focus on youth development, including education, sports, and other cultural activities.

He, later sought the constant efforts of society, along with the Army, to counter the Youth Radicalization by the "enemy", terming it a national effort.

"Radicalization is being done by the enemy. Army, alone, cannot counter this, but society also should put in efforts as it is a whole national effort. We are taking the administration and religious leaders along with us," he said.

He said that the White Knight Corps is also working to counter narcotics and infiltration in the Jammu region and mentioned that "terror recruitments are more valley-centric".
Recently, Vigilance Defence Guards (VDG) have been raised under which terrorist Talib Hussain was captured by the local people.

Earlier, this scheme was known as Village Defence Committees (VDC), where volunteers from villages were trained by the Indian Army and Police. Under this scheme, rifles were provided to VDCs and they protected their villages from terrorist attacks and terror-related activities especially the vulnerable villages in mountainous areas of the Jammu region. VDC members had helped Indian Army, and Jammu and Kashmir Police fight against terrorism. (ANI)