Vasknag: A spring that disappears for six months 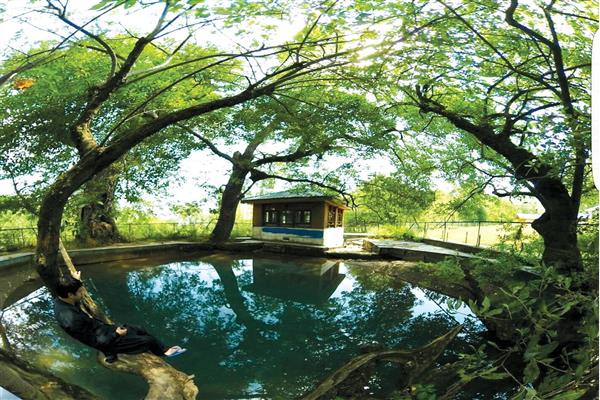 In the lap of mighty Pir Panjal and under the foothill of Waltengo Nar, the Vasknag flows for six months and disappears, each year.The spring that runs dry for six months miraculously is famous in south Kashmir’s Kulgam district.

Its historical significance is striking. It is believed that the spring is outcome of a pact between a Hindu deity and a Muslim saint. On Urs of the Muslim saint,Syed Noor Shah Wali Baghdadi (RA), each year people visit the shrine as well as the spring which is a short walk of 10 minutes from the shrine.

This place is among quite cold places in winters and has more snow accumulation than the rest of the areas in the district and though the Urs of saint fall in February, despite cold and snowbound surfaces, devotees do prefer to visit the spring as well. The rest of the months Vasknag gets visitors occasionally. The tourist spot is at the endpoint of the Kund valley – a valley that comprises 20 villages.

A 20-kilometres distance from Kulgam, through the picturesque road and an admirable journey for both off-road and on-road hikers, takes one to the wonderful place called Vasknag.

“Vask” is a name of a Hindu deity, and “Nag” is a snake.“Nag” in Kashmiri parlance means a spring. “It’s mythically believed that once a hindu deity had taken a rest under the foothill of Waltengo Nar and he had put his basket or something next, somebody from around walking to the deity opened this basket and a snake came out of it. And it gave rise to spring which woke up the deity in wonder.The Muslim saint Syed Noor Shah Wali Baghdadi (RA) appeared and asked him to let the spring flow for him six months and rest of the time for you. Even since then, the Vasknag has been flowing for six months and then disappearing,” says Syed Masood, a local poet.

The area is bounded by the mighty Pir Panjal range and an escarpment of Waltengo Nar. Waltengo Nar was in news for the tragedy which struck it in 2005; a snow avalanche that killed more than 150 persons in the village of Waltengo.

Vasknag spring is some 20 feet wide and has 4 feet depth. The water is so cold that one can't keep a hand for a few minutes in it. No aquatic species is seen in this spring, nor can they survive in it, because of the cold water. The spring is among very few springs in the valley which doesn't have fish in it.

The flow of water in the spring comes in March and disappears in August – when people in the valley irrigate their paddy crop for the last time in the season.

“Its water is perfect for drinking and is believed to be good for digestion,” Masood says.

The spring is surrounded by a small park and has a tourist cafeteria. On the bank of spring, a small Masjid is situated which can accommodate around just five devotees at a time.

The uphill road to Vasknag was recently macadamized to make the journey easy for travellers; the development around spring is in the same position as has been years back.

“A cafeteria was built on the lawn of spring which remains locked, no dustbin for proper disposal of junk food covers or plastic bottles is here,” says Parvaiz Maqbool, a local. The spring is covered with snowfall these days and doesn’t ooze water and hardly anybody visits the spot.

Tourism Department declared it a tourist spot under Category-C (Remote Areas) in The Jammu and Kashmir Tourism Policy - 2020 which was approved by Administrative Council vide its decision no 47/06/2020 dated 18 March, 2020.

“The decision then was welcomed by all sections of society, it needs more attention to attract visitors from far off areas,” Maqbool added.

Kund Valley has the potential to lure people throughout the year as it hasgotsmall mountain peaks, streams and beautiful Pir Panjal for trekking and skiing, besides having the possibility of winter sports.

Speaking to Rising Kashmir, Mohd Rafiq, Assistant Professor at GDC Boys Anantnag said, “springs like these are generally called as ‘seasonal springs’ and it’s amiably verified that such springs flow in the season of Spring and Summer and then disappear or discharge less water in Autumn and Winter”.

He further stated that he hasn’t come across any research about this particular spring and said, “There is a need for field research and observation of all factors, before bringing to people solid information about Vasknag.”

Moreover, an official at the Tourism department said, “we have constructed a cafeteria in the premises of spring back in 2016-17 and due to disturbance in the valley its further work couldn’t progress. This year we will renovate it and will be open for visitors”.