US: Senate approves USD 12.3 billion aid for Ukraine in war against Russia 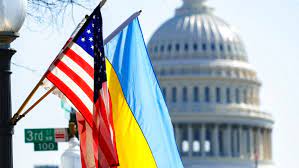 US Senate on Thursday approved emergency aid of USD 12.3 billion to Ukraine in its war against Russia. The measure will not only continue government spending for several weeks but will also help Ukraine in war to a greater extent.

According to the New York Times, the US Senate on Thursday approved a temporary spending package to keep the government funded past a Friday deadline. Under the legislation, the measure would provide about USD 12.3 billion in emergency aid for Ukraine which includes USD 3 billion for supplies and arms for Ukraine's military.

It also provides USD 4.5 billion for Kyiv to keep the country's finances stable and keep the government running in order to provide basic services to the people of the war-torn country.

The aid for Ukraine comes straight after Congress approved approximately USD 54 billion in two previous packages.
On August 19, the US Defence Department announced that it would provide a new USD 775 million in additional military assistance to Ukraine, including HIMARS missiles, artillery, and mine-clearing systems.

Since 1993, the US has invested over USD 4.2 billion for the safe clearance of landmines and explosive weapons of war (ERW) as well as the securing and safe disposal of excess small arms and light weapons (SA/LW) and munitions in more than 100 countries and territories.

Notably, Russia launched a "special military operation" in Ukraine on February 24, which the West has termed an unprovoked war. As a result of this, the Western countries have also imposed several crippling sanctions on Moscow.

"Tomorrow in the Georgian Hall of the Grand Kremlin Palace at 15:00 [1200 GMT] a signing ceremony will take place on the incorporation of the new territories into Russia," spokesman Dmitry Peskov said on Thursday, as quoted by Al Jazeera.

He further added that Putin will make a speech at this event.

The referendum by the Russian authorities on the annexation of occupied territories of Ukraine was largely seen as a "sham referendum" and has been widely criticised by various countries.(ANI)