Unsung heroes who illuminate our homes 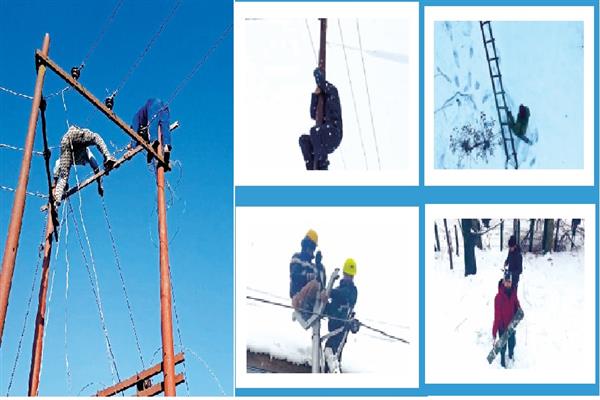 On January 8, 2022 Mohammad Iqbal, a daily wager working in PDD, left his home early in the morning amid heavy snowfall to check the status of electricity in far-off areas of Shatgund Payeen in the Mawer belt of Kupwara district in north Kashmir.

Soon, as he stepped up, the roads were covered with snow. It took Iqbal three hours to reach his place of posting in Shatgund. As there was no transport available, he covered the whole distance by foot.

After reaching the spot, he took a long stick and a ladder on his shoulder and started marching towards every single electricity pole in the village to fix the glitch. He was unable to walk freely as the snow was up to his knees and both of his hands were busy keeping the stick and ladder together. At around 8:00 PM on the same day, he restored all the electricity lines damaged by the snow.

He took a long breath after realising he had finished his work. His clothes were soggy and his hands were shivering due to the chill, but he again started walking towards his home and reached his native village of Maratgam at around 11:00 pm in the night.

Iqbal has been working for Kashmir Power Development Corporation Limited (KPDCL) for the last fifteen years on a meagre salary of Rs. 6750. Iqbal says, he is unable to meet his ends with this salary.

On returning home late that evening with shivering hands owing to the intense cold, his clothes were sodden, and his left hand had old burn injuries. When asked about the same, Iqbal - the under paid worker started narrating his ordeal.

“I have suffered many burn injuries when I was repairing the live wire. It is my good fortune that I am still alive.I have seen many people who died after receiving an electric shock,” Iqbal says.

Hundreds of people have been injured in the past, and many other employees have been electrocuted while repairing the electric wires in different parts of the valley.

“My day starts with a call, and the callers always say an electricity line has fallen and I have to reach out immediately because it is my job. Till I reached the scene, I kept praying to Allah. That means no one will inadvertently touch a live wire,” he says.

For Waseem Raja, a young PDD daily wager, who is posted at Kukrosa village in Ramhall, a belt of Frontier district, the day was hectic. He woke up in the morning and started touring Kukoorsa village to find out the status of the electric wires in the village.

While leaving the home, he took an axe with him because the village is close to the dense forest, where there are always apprehensions about having wild animals. The area received more snow than other parts of Kashmir.

Waseem, along with some other daily wage workers, started climbing trees to make electrical lines functional.

Raja said that as he was leaving the house in the snow, his wife told him to be careful while climbing the trees because they have small children to look after.

“Every day we leave home in the hope that our services will be regularised. We are sure that one day our issues will be sorted out. Because everyone understands that a meagre salary is insufficient to manage one's affairs,” Raja said.

Mubeena Begum, 35, a wife of PDD casual labour who died last year due to electrocution in Rawoocha village of Rafiabad in Baramulla district, is recounting her ordeals inside her small house to everyone who is visiting her home for condolences.

As per the young lady, on December 28, 2021, Mohammad Ramzan Choupan (40), her husband, received a call from a villager stating the electric wire had fallen in the village.

Soon after receiving the call, he (Ramzan) asked her daughter to prepare tea for him. After a few moments, his 12-year-old daughter brought him a cup of tea. While leaving the home, he said, "Behow Rubs hawal" (Be here, Allah is with you). These were his last words while leaving the home.

Half an hour later, there was a hue and cry in the village. Everyone was heading towards the place where electric transformer was installed. “I too started heading towards the transformer. From a distance, I found my husband lying on the earth. I was unable to move. Finally, I wrapped myself around him, and I don’t know what happened next,” she said.

According to the villagers, soon after the incident, the PDD labourer was moved to a nearby hospital for treatment. From there, he was later shifted to the Government Medical College in Baramulla, where doctors declared him dead on arrival.

“We never thought that he would never return to his home again. His demise has shattered us. I am worried about who will feed my family now. My elder son is only 12 years old, while the 5-year-old is among the youngest,” she laments.

Who will help me in upbringing my children, the lady said while crying. ”We have faced two tragedies in less than a month. After my husband’s death, I lost my father-in-law too.”

Soon after the news of Ramzan’s death spread in the village, the residents staged a massive protest in the locality, accusing the PDD department of negligence. Before touching the wire, he made a call to the concerned grid station to disconnect the power supply.

The family said when Ramzan climbed to the electrical transformer, they restored electricity without intimation, resulting in his on spot death.

After his death, several officials from the department and district administration visited the deceased’s home to pay homage and assure the family they would be compensated. “Since the death of my husband, I have been in distress about who will feed my four young children, as we don’t have any source of income. The only hope is that the authorities will help and compensate us,” Mubeena Begum siad.

Around 09:00 am on January 9, Shabir Ahmad Dar brought some biscuits from the nearby shop and told his wife, Fahmeeda Begum, to prepare tea for him.

He told me he wasn’t getting time during work to take tea due to workload, Fahmeeda said.

Every day, after finishing the tea in the morning, he used to go to the village to check the electric wires. But on this fateful day, he woke up as usual and started his routine.

“At 12:45 pm on the same day, my phone rang, and it was my brother calling. He told me that Shabir had been electrocuted,” Fahmeeda said adding, “when I stepped out of my home and reached the middle of the village, my husband was taken to District Hospital Kulgam and later shifted to SKIMS, where he lost his battle for life on January 14.”

I am completely broken, she said. “I am unable to understand what will happen to me and my 14-year-old son.”

She says, her husband has been working in the department for the last two decades, on a low salary which could hardly meet their ends. To support the family, she too was working.

However, she recalled that the villagers helped her very much, and she couldn’t return to them throughout her life.

The officers from the district administration have visited her house for condolences and assured her that they will do whatever they can.

The villagers said the couple was living in a single room made of mud, but they had never been provided with any assistance from the government schemes.

The young lady in her small house is hopeful that she will be compensated so that she can start her life again.

Given the rise in fatalities and injuries in the department, Kashmir Power Development Corporation Limited (KPDCL) recently said all its employees, including field staff, will be covered under the welfare fund scheme for meeting their health expenditures.

As per the Chief Engineer of KPDCL, Aijaz Ahmad Dar, “the corporation will bear the medical expenses of its employees, including frontline staff, and facilitate them in getting golden cards so that they receive proper medical treatment.”

He said all the employees will be covered under the welfare fund soon, and in the case of injury to staff, KPDCL will take responsibility for the medical expenses of the affected.

The department will strictly implement Standard Operating Procedures (SoPs) aggressively and procure the latest equipment to minimise accidents and injuries to its staff, including linemen while repairing the lines, transformers, etc.

He, however, said that at times, the department tries to raise funds for the family help of injured employees and not for medical help.

"With the new strategy in place, there will be a significant fall in accidents and injuries to employees in the line of duty," he added.

Pertinently, as many as 175 employees have suffered injuries due to electrocution in the Kashmir division since 2013. In addition, 60 have lost their lives in the line of duty.

A senior official of PDD told Rising Kashmir that in the majority of the cases, accidents took place after the electricity supply is restored while men are still working on repairing electricity transmission lines. The majority of the employees killed or injured in these incidents were the sole breadwinners for their families.