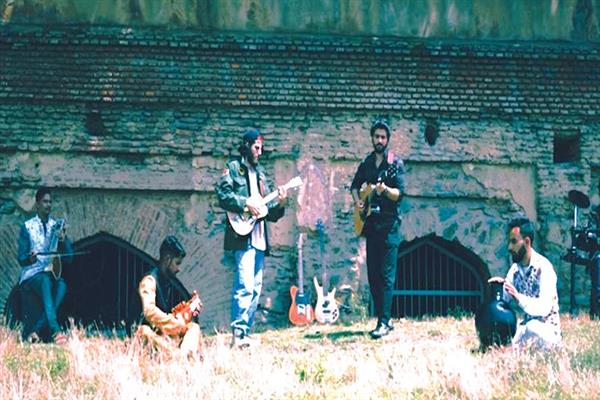 The track that doesn’t need words to express but the essence of music to feel. Directed by Ali Saffudin and Faizan Showkat, the soothing music of folk instruments blends with the vibrant sounds of guitars and drums was used to create a fusion track, Saaz E Qalb.

The origin of the composition traced back to the Sufiana group of Ghulam Ahmad Sofi and is believed to be composed by Ghulam Mohamad Dar, the sarangi maestro of Sofi.

Kashmir has a rich treasure of Sufiana music and the legends of the music had an influence on the artists who created the song. The Kashmiri Sufiana music is performed in a manner that the instrumentation is done in the beginning which is called Seal in the local language. As the Sufiana gatherings continue for hours, Seal provides a warm up stage for its listeners.

With an intention to unearth the lost treasure of instrumental music, Ali along with the team of artists wanted to bring the element which most of the people in Kashmir are not acquainted with.

Ali, a guitarist said, “From many years, a lot of focus has been on poetry and singing. Instrumentation is yet unexplored in Kashmir. This kind of music has a spiritual connection. When we play an instrument like Rabab and Sarangi, there is a spiritual call to your divine creator and I have imbibed that thing in my guitar too. There is a divine connection with an instrument. I am bringing something back from the past. I can get more authentic things which are connected to the roots of Kashmir and record them in a better way.”

Although the song has received a lot of appreciation, several eyebrows were raised about the location of the song with people saying that the song was shot in the premises of a mosque. “The location of the song is abandoned from the past 200 years and it is left neglected. If the mosque is revived, I will delete my video happily. My memories are associated with the place. As of now, I am proud that I showcased the place as a marble of architecture in the valley. The place does justice with the track,” he said.

Though Sufiana music has a small population of listeners, Ali feels that an experiment of producing song without the words is something he would always remember.

“I have been reviving the old things through my music and the music in Kashmir has been perceived psychologically and philosophically. It has not been restricted to entertainment in courtyards. Though music is associated with a lot of things like showbiz, entertainment, western infusions etc. but this music is attached with spirituality. While we were shooting, the sarangi player and the rabab player were on their toes that after the shoot they will get to the Makhdoom Sahib shrine to pay the salutation. These are the kind of musicians I keep finding who have a spiritual connection with the music.”

In the song, emphasis has been laid to improve the composition and arrangement. “Instruments are more professional, sound is clean which can be presented on the world’s stage,” he added.