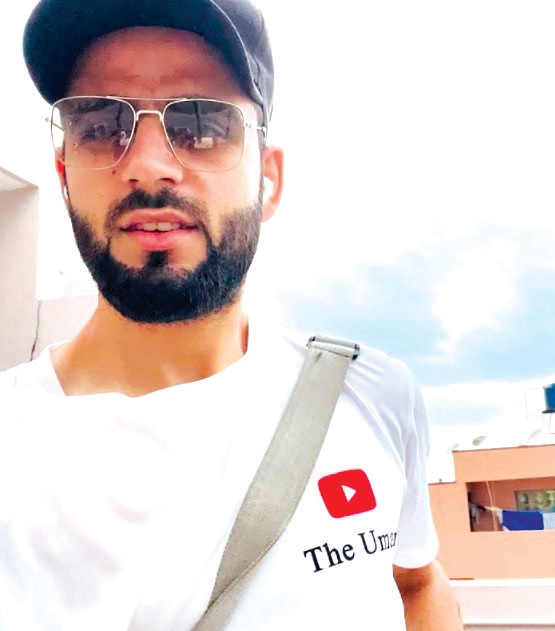 Umar Iqbal, a 23-year-old boy from South Kashmir’s Pulwama has become an internet sensation in Kashmir after his poetry and motivational videos went viral on social media and received an overwhelming response from the people across Kashmir.

Born and brought up in Saimoh Tral, over the past two years, Umar has earned a good base of subscribers on social media for his unique content.

“It was September 2018, when I left his home and went to Bangalore for higher studies and after two days my mother left for the eternal world and it was the toughest day of my life,” he said.

Umar told Rising Kashmir that it lead him to depression which continued for two years. “To come out of this situation, I started posting motivational and poetry vlogs on social media which got an overwhelming response from the people,” he said.

Umar says it was the toughest stage of my life and during my studies in Bangalore, I continued to post positive content on social media aimed to motivate people for positivity,” he said.

Umar says over the past two years, he focused on better content. “My Channel ‘ The Umar’ has earned 72K subscribers on Youtube, 1.5 lac likes on his Facebook page, and 2.16 lacfollowers on my Instagram. I am satisfied with my work and will continue to serve people,” he said.

“My first video went viral, and I felt the response was positive. I focused on content simply while thinking of people who aren’t good at drawing. But, I was surprised by comments saying they wanted to hear me talk more,” said Umar.

He said after that the number of subscribers increased sharply after his videos received attention from young people. The reason for a video’s popularity was the unique content.

Before social media, Umar was doing social work in both Kashmir and Bangalore.  He helped Kashmiri students in Bangalore during the first wave of Covid19.

About his message for aspiring content creators, Umar said they should focus on their content and never lose hope in their work. It is a good platform and we need to explore more opportunities.

“My mission is to spread positivity. The simplest way to begin spreading positivity is to smile. That’s right, it’s time to take your pearly whites out for a stroll,” he said.

Umar says sending a warm smile and positive message can really make a difference. “It’s actually a lot easier to spread some positivity than most of us realize,” he said.