Turf grass and its management 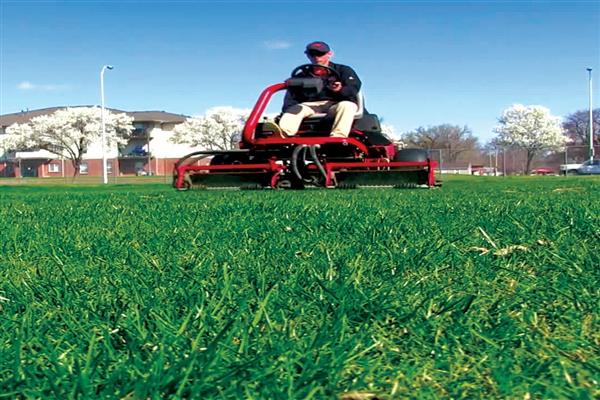 The turf grass and lawn care industry is growing rapidly due to huge demand in residential as well as in commercial sectors for environmental and aesthetic benefits.  Growing demand of turf grasses for sports, landscape, commercial, residential, athletic facilities and home gardening has given boost to turf industry.

Historical Royal Calcutta Golf Club was established in 1829.As far as international sports fields are concerned 50 stadiums exist in India where as domestic sports stadiums are around 520.This indicates the scope of turf grass industry in India at state  as well as was national level.

According to data available, in India turf grass industry occupies around 30,000 acres and some 400 acres are under commercial cultivation of high valued turf grasses. The rates for turf grasses varies from specie to specie ranging from Rs 20 per square feet to Rs 120 per square feet including establishing charges. This indicates that out of 500m2 one can earn around rupees 1.5 lakhs profit.

6) Landscaping of schools and other educational institutions.

Selection of grasses for Lawns

How to raise turfs

Seeding:In this method about 30 kg seed is required to plant one hectare. Soil should be finely tilled and a light rolling is given and divided into small fragments. Seeds are mixed with double the quantity of finely sieved sand and vermicompost and to be rolled again followed by sufficiently watered for 4 to 5 weeks. Germinate of seeds takes place in four to five weeks. Rate per kg of seeds ranges from 4 thousand to 15 thousand and this is the cheapest method of raising turf grass.

Turfing:Patches of earth with compact grasses on them are cut from a place where grasses are short.Site is prepared for turf placement. Soil finely leveled and tilled followed by  filling  the gaps in between so that root formation is favored and extra water gets absorbed. This method is ready made lawn system but it costs Rs 1.5 to 4.00 lakhs per 500 m2 depending upon a particular grass specie.

Turf plastering: Grass is procured,5-7cm bits chopped properly and garden soil is mixed with twice the quantity of chopped grass followed by leveling and proper wetting of site.This mixture is spread to a thickness of at least 2.5 cm and watered again. Rolling is done the next day and  shoots appear in two to three weeks.

Dibbling roots:This is a slow but one of the cheapest method. Ground is leveled and when the ground is wet small pieces of grass roots are dibbled 10-15 cm in lines or channels made across the lawn. In about six months the grass grows underground and roots spread. The lawn is then frequently mown, rolled and watered in order to make a compact lawn.Proper weeding should be done and gaps should be filled with soil and grass roots.

Astro turf:It means a synthetic turf that is commonly used in roof gardens and playgrounds in developed countries. Main advantage of this type of lawn is that it does  not require maintenance operations used for natural grasses. It is easy to manage and hence time saving. It needs constant sprinkling of water in order to bind the fibers to provide a carpet like look. First generation synthetic turfs were made of nylon. The second generation turfs were made of polypropylene. Fibers are longer than 55mm and  first generation synthetic soccer field was installed in the Netherlands in 1996.

Irrigation: Water in the early morning or midday is good practice but in the eveningthis may encourage disease development. Sprinkler or drip irrigation can be adopted for larger areas and sufficient amount of moisture should be ensured at  entire root zone.

Nutrition:Turf grass requires at least 16 nutrients for normal growth and development. Some nutrients are needed in large amounts, other nutrients only in minute quantity. Nitrogen, phosphorus, potassium, calcium are important among major elements and among micro nutrients, iron ,manganese ,boron, zinc, copper, molybdenum, & chlorine are required only in minute amount.

Rolling: Rolling a new lawn after seeding  or  after sodding is very important. Established lawns can be   rolled during spring when grass is  just coming  out  of dormancy & the roots are in active growth .

Turf mowing: The height at which a given perennial grass can be cut & still survive for extended periods is directly related to its ability to produce enough leaf surface and it varies from specie to specie. But first three mowing should be done at higher level so that roots are not disturbed. Frequency of mowing is also an important consideration in the maintenance program. Removal of larger grass will result in a physiological shock to the plants, cause excessive graying or browning of the leaf tips.So, careful mowing is pre requisite wether done by electric cordless rotary mowers or reel mowers.

Weed control: Weeds are the plants out of their place.A plant may be desirable in one situation & a weed in another,for e.g creeping bent grass plants can invade a Kentucky blue grass lawn & cause unsightly patches.

Cultural control: The cultural control may include raising or lowering the mowing heights , changing the frequency of mowing, lengthening or shortening the periods between irrigation, increasing or decreasing the application of fertilizers, hand pulling and hand raking. A combination of proper cultural practices plus prudent use of chemicals is sometimes necessary to control weeds.

Post-emergence weedicides: These are used to kill weeds after the weed plant are up & growing. To be effective, most post-emergence herbicides must be absorbed through the leaves, consequently, liquid sprays generally work better than dry granular materials.