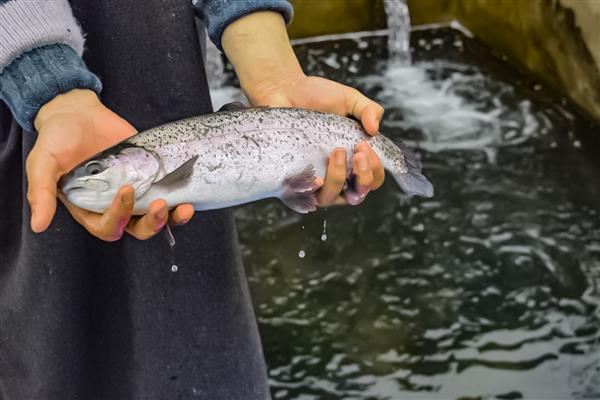 Tempted by the high returns, the youth in Kashmir have shown exceptional grit to become fish farmers over the past few years.They have not only achieved success in this business but have also created jobs for others.

Shakeel Muhammad Teli, a resident of Sakhras Shrigufwara in Anantnag districtestablished his fish farm in 2009 and it was the first trout fish farmacross Jammu and Kashmir then.

He said he was interested in fish farming from his childhood and used to run a common carp fish unit at his home until 2009, but it did not yield good results.

After establishing the new farm, he annually produces 7 tons of trout fish and has generated employment to more than six people.

Talking about opportunities in fisheries, Teli said fish farming has a huge potential and unemployed youth who are interested should come forward and take its benefits. “I have two children who were unemployed and now they have got involved in it. It is the best opportunity for the youth,” he said.

“Apart from selling our produce locally, we are also extending marketing part. We have sent our produce to national markets like Mumbai, Bangalore and Delhi in ice packs,” he said.

When Teli set up his fish farm he got a lot of help from the Fisheries Department in establishing it.

Before setting up the farm, he was working as driver. When he got to know aboutbenefits in fish farming, he developed interest and started this business.

“In the initial stage, the Fisheries Department provided funds for construction of pond besides providing feed, seed and equipment like hand net and covering net,” Mir said.

Today, Mir provides employment to five people including his two brothers. They are allearning handsome money and are living the comfortable life.

“The officials of extension wing of fisheries department visit our farm two times in a month in order to check the water and health of the fish,” he said.

Similarly, Hamidullah Khanday from South Kashmir’s Verinag set up his fish farm in 2010. Today, he sells trout fish worth Rs 20 to 25 lakhs in a year and his farm produces 24 quintals of fish in a year.

He got the idea of setting up the fish farm after he participated in an awareness program which was organized by the Fisheries Department.

“The department gave us financial support and also provided seed and feed which was on 100 percent subsidy,” he said.

When he started the farm, he started it lonely but today, he provides employment to four people including two non-locals labourers who work for him round the year.

“It is livestock and needs extra care and precautions. It has good market value. We are very satisfied with the business,” he said.

Before setting up the farm, Khanday was working in a private school on peanuts. He would hardly meet his family needs despite working hard. He had never thought that an idea can change his life forever and could generate employment for others.

Over the years, these fish farmers have gained expertise in rearing trout fish and are playing a vital role in catering the demand of fish of the local population of their respective areas.

“We are executing different schemes like PMMSY and State Capex. For the development of trout rearing units Bio-floc and RAS units in private sector and fish hatchery, feed units, carp units, a transparent mechanism is in place,” he said.

The trout production both in private/government units in J&K has reached to 1663 metric tons of which 90 to 95 percent is from Kashmir owing to its abundant cold water resources.

He said the department is committed to develop trout fisheries on sustainable basis. Over the years the department established infrastructure both for seed and feed production.

“The availability of seed and feed is considered as prime factors for the propagation of trout culture. The production of quality seed is an intricate mechanism that involves intensive labour and technicality. In the present scenario the department is in position to cater to the demand of seed of both private and government established trout farms and rearing units,” he said.

He further said a cumulative production of an estimated Rs 40 lakhs of fingerlings have been achieved in the last fiscal. Further, to boost seed production, the Department has established one Trout Hatchery in private sector at Sagam Kokernag under Blue Revolution and one more Hatchery at Akad under PMMSY.

Due to the endeavors of the department for making feedstocks available, a trout feed mill with a production capacity of one ton per hour was imported and quality pelleted feed was made available to beneficiaries covered under trout culture.The mill is located at National Fish Seed Farm Manasbal.

“To address the issue, the department under Pradhan Mantri Matsya Sampada Yojana (PMMSY) has sanctioned two Trout Feed Mills for the private sector for twin Districts of Anantnag and Kulgam,” he said.

Under Centrally Sponsored Scheme PMMSY and State Capex, the Department, for the current fiscal is going to establish 250 raceways (Units) in private sector to boost trout fish production to the extent of 250 MTs, a huge boost in production.

The director fisheries said for every industry to boost, a marketing network is highly required. The Department of Fisheries, in this regard, has established trout marketing outlets at Anantnag, Srinagar, Kupwara and Jammu.

“Since trout is a highly perishable commodity and need proper refrigeration and preservation, the department has procured refrigeration vehicles in this regard for transportation of marketable stocks to different fish markets,” he said.

In Anantnag district which was declared as Trout District and under One District One Product, trout fish has been declared as the main entity in produce. He said the department is going to establish a packaging unit where export of trout fish outside the UT is under an anvil. However, most of the fish production in trout is being utilized locally and a flourishing market is available in JK.