Trip to snow-wonder of Kashmir 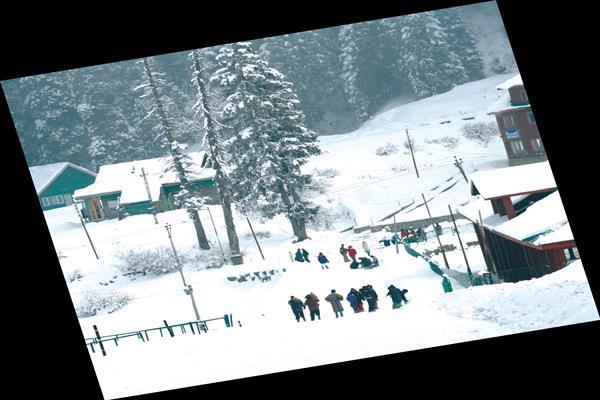 For me, it was not less than a challenge to motivate myself for a trip to Gulmarg in winter. Many of my friends have narrated their stories of Gulmarg to me and their enthusiasm always made me want to explore the place.

Finally, earlier this month, on 7th December I decided to go.

I woke up at 8 am to get ready by wearing woolen clothes. I was excited to explore the beauty of this frozen part of our paradise. I chose the easiest way to reach my destination i.e. via Tangmarg. All the places that came in between were like the steps I was taking to reach winter.

During the journey in a cab, I met a tourist couple, a guide and some boys who happened to live in Kerala. They were so much fascinated by the beauty of Kashmir that they were capturing everything they could and were discussing their journey from Srinagar airport to Tangmarg.  At 11:45 am, I arrived at Gulmarg with mixed emotions.

My first reaction after seeing the place was that there seemed to be no end to the snow capped meadow. Snow indeed compliments the evergreen beauty of Gulmarg.

While taking a walk, I saw a long queue of tourist guides who eagerly, yet very patiently, waited for welcoming the tourists and helping them explore the beauty of snow fed meadows.

I saw tourists, some with guides and some like the couple in my cab with cameras and I also saw locals who were equally joyful and delighted as Gulmarg is.

The first place I visited was the cable car Gondola. There are many ways by which one can reach the place like hiring a pony in summers, a sledge in winters but I thought of walking from the main bus stand to the cable car station. It took me some 15 -20 minutes to reach the venue.

Onboard the Gondola, I was over joyous to witness the snow capped mountains. I saw the Nanga Parbat as well. I also witnessed the leaves of trees being covered with snow. I wanted to keep riding on the Gondola but arriving at the starting point was filled with joy as well.

After the Gondola ride, I took a walk to the Maharani temple. I felt that with every step you take in Gulmarg, you witness something new and something more exciting and interesting. I witnessed people taking a ride over the snow atop sledges. I spoke to one of the owners of the sledges who said that people there were sledging to experience the beauty of riding over the snow.

For me, the sledge is a replacement for horse riding. Both sledging and horse riding allows people to experience everything themselves. The only difference between the two is the season in which they operate. Watching the sledges riding on the snow made me nostalgic for a horse ride.

It was a long way to reach the temple but the best part was that the temple was visible from all directions because of it being located on a certain height.

I had to cross more than twenty stairs to reach the temple. Tourists had formed a queue on the stairs and finally, after crossing all the stairs, I arrived at the temple. For the first time in my life, I saw people ringing the bells of a temple. Inside the temple, I met Sameer Ahmad, a caretaker of the temple. My quest for knowing more about the temple made me ask a lot of questions to Sameer.

The temple was constructed by Maharaja Hari Singh for his wife Queen Mohini Bai Sisodhia. From 1915 onwards, the temple, being a sacred place, has also been a destination site for films. What fascinated me about the place was that although it was not a big temple but yet the visitors would feel satisfied on visiting the temple.

While coming down from the stairs of the temple, the skiers caught my eyes. Skiing is something that needs you to be a little professional. I enjoyed watching people coming down the slopes. Several people told me that skiing makes Gulmarg look like Europe during winters. I wanted to give skiing a try but I could not because of my fear of losing the grip. Skiing in Gulmarg offers the beginners three baby slopes with an instructor and for the ones who are experts, Apharwat is the ideal place. Ishfaq Ahmad, one of the workers in the skiing department told me that the official price for experiencing skiing is RS. 2750.

Continuing this beautiful sight seeing, I thought of eating something that I had never tried before, something that people call street food, I got myself something that looked like a veg roll with some fillings of mixed vegetables and chutneys. I had to pay 20 Rs for this and while eating the taste looked similar to Masaltchot (a kashmiri street food) and after confirming it actually was a masaltchot.

After watching skiers exploring the slopes and having the tchot, I moved towards St. Mary’s church. Mary's Church is a little adventure in itself. The church gives one peace. Despite being small, the church is known for its stained-glass artwork. There weren't many people going towards the church, but all those who were going to the church talked about the scintillating wooden walls of the church depicting scenes from the Bible. Looking at the church from a distance, I felt like going back to the vintage age of greystone walls. The serene beautiful surroundings, its architecture and its centric location gave me the feeling of living amidst the grand British Victorian style era.

One might face a problem while visiting the church in winters. Having personal means of transportation makes it easy to reach the place in winters when everything is covered with snow but in summers hiring ponies gets the job done.

After my little trip to the church, I wanted to visit the Maharaja Palace but because the snow had made the roads slippery, I dropped the plan and started thinking of my trip in June when I had gained a chance to visit the place. I remember the way I was attracted to the wooden structure and the fireplace in every bedroom.

Many places in Gulmarg are closed during winters for safety reasons but even if you take a view from some distance, you feel satisfied. The Children’s Park, the Golf course being covered in snow just looked amazing.

There is one specialty about Gulmarg that you can take pictures wherever you want. Not being so fond of selfies, I captured the natural beauty.

After my sojourn, I felt hungry. As Gulmarg is the hot spot of tourists, so is the number of hotels, restaurants and local food stalls in it. Seeing a wide range of hotels, I chose a local restaurant which was near the bus stand.

Luckily the place I chose has been serving in Gulmarg for almost 40 years. It is a local restaurant with a huge inflow of people. I ordered some biryani and cold drinks and had to pay a reasonable amount.

After having the food, I wanted to explore the markets. Kingsley market and some shops near it were on my list because the market side of Gulmarg is located on one side only. I entered almost every shop; all shops were good but what one needs to keep in mind is activeness in bargaining.

After my first trip to Gulmarg in winter, I must say that the place is a bowl of beauty and there isn't anything hidden. A look from any corner of any place makes one witness the endless beauty. Such is the beauty of Gulmarg that one can't see an end with one's eyes.

Being lost in the glory of my little challenge, I noticed that it was time for me to leave. I chose the same route via Tangmarg and reached home at 5:00 pm.

While being home and tired, I couldn't erase the imagery in my mind of a place that was a wonder during winters. I kept thinking about the place during its leaf shedding season and the other image was of how it looked like in the snow. In both seasons, Gulmarg's beauty is unparalleled.

I was happy that I took my first ever trip to witness the beauty of the snow-filled landscape of Gulmarg. In conclusion, I must say that very few places in Kashmir shine in snow as it does in Gulmarg.

And now with experience of exploration, I can definitely say about the do's and don'ts for Gulmarg.

·        Explore every place and avoid transport if you can walk.

·        Never pay entry fees to anyone who asks. Entry fee is for a certain places like Children's park, Golf course and Maharaja Palace.

·        Avoid traveling by bus to Gulmarg during winters because the roads are usually slippery.