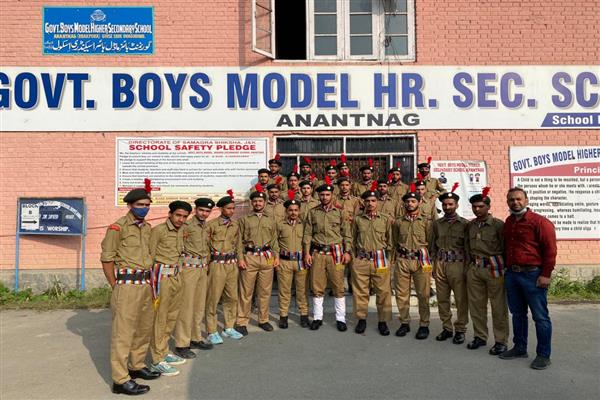 Also, the heads of such schools claim that these institutions have advanced technology, infrastructure and teaching staff for best results.

This school located near the historic Mughal gardens, Dr Manzoor Ahmad,the principal of the institution claims that no other school in the district can compete with this institution in terms of quality education, infrastructure, laboratories and extracurricular activities.

“The higher secondary is the only institution that has all the equipment, infrastructure, labs and other things that require running the school at its best capacity,” Manzoor said.

He said, “Not even one private school in the district is equipped like our higher secondary.”

Manzoor says that in the institution more than 1300 students are enrolled.

Manzoor says that the institution is a Model Higher Secondary because of the quality education, best infrastructure.

He also said that “No private in the district can compete with the government Model Higher Secondary School Anantnag in terms of quality education, infrastructure, laboratories and extracurricular activities.”

Manzoor said that he was posted in the school six months back.

“We have a pass percentage of over 80 per cent among which some students are position and distinction holders,” he said.

The Principal while sharing the profile of the school said, “The government Model Higher Secondary School Anantnag was established in 1959 and since then it has proved an educational hub in the district.”

“The school is having an excellent track record in providing quality education which is reflected by the number of scholars, well-known academicians, politicians, bureaucrats, doctors, engineers and other professionals produced by this prestigious institution,” Manzoor said.

In the meantime, the Chief Education Officer of south Kashmir’s Anantnag district Mohmmad Sharief said that a total of 1556 schools were functioning in the district that includes 60 higher Secondaries, 117 high schools and the rest are middle and primary.

Equipped with the infrastructure of classes, libraries washrooms and labs,” Sharief said,

The principal of government boys higher secondary Baramulla Javid Ahmad Rather said that the institution has been maintaining the Teacher Pupil Ratio (TPR) continuously to provide the students with quality education.

“In government boys higher secondary Baramulla, around 1500 students are enrolled and the institution has staff strength of around 54 persons,” Rather said.

Stating the outcome of the institution, he said that the school has a pass percentage of over 75 per cent in every class.

Rather said that the dropout rate among some of the government schools has always remained an issue, “Our school has successfully overcome it and has utilized the best service of its employees.”

He also said that in the past 10 years, the schools have upgraded their classrooms to their best capacity; benches for the students have also been increased.

“We have a good school playground, separate laboratories of physics, chemistry, botany and zoology,” Rather said.

He further said that the robotics lab in the school has been functional and open not only for its students but for the students of other institutions as well.

“We have encouraged the students of other institutions to study in our robotics lab to get the advanced exposure of the science,” Rather said.

The principal also said that the school is providing all the sports facilities to its students and the management is planning to establish the clubs for Cricket, hockey and football.

He said that the government boys higher secondary Baramulla had been established before 1948.

“Till the year 1967, the government Degree Colleges Baramulla used to function from this school and we have found some records that state that the school was functional before 1948,” Rather said.

Meanwhile, the Chief Education Officer of north Kashmir’s Baramulla district, Ghulam Mohammad Lone said, “The government boys higher secondary Baramulla has an enrolment of over 1500 students that is balanced with the good Teacher Pupil Ratio (TPR).”

He said that the school is one of the oldest institutions of the district that has all the advanced infrastructure like robotics lab, gym centre, water, electricity and smart classrooms.

In district Srinagar, Shri Pratap Model School is considered as one of the best government schools whichis equipped with everything to run a model school.

The Principal of the school, Nisar Ahmad said that the S P Model Higher Secondary School Srinagar has at least four buildings wherein dozens of classrooms have been constructed.

He said, “To make it accessible for more students, the school is constructing one more building that is under construction.”

“In Srinagar district, S P Model School remains the priority for the students to fetch the admissions,” Nisar said.

He further said that the school is known for its quality education. “Besides, the school has its auditorium room and other equipment for the extracurricular activities.”

Stating the status of the availability of infrastructure, the principal said that the school is equipped with a smart classroom, four science labs, one ICT lab, and four libraries.

He said, “The school has a record of producing an ample number of doctors, engineers and scientists.”

The school is believed to be established in 1874.

S P Model Higher Secondary is an all-boys school located at M.A. Road, Srinagar. It is the first and oldest school in Srinagar, locally known as S.P school. It is one of the most prestigious institutions in Jammu and Kashmir owing to its rich history and notable alumni.

The school management has said, “Our school has a long and prestigious history of 141 years at its back. The school was established long back in 1874 AD.”

In 1883 there were 450 boys on its roll and in 1891, the school has raised the status of Srinagar High School and was later on called Shri Pratap High School.

In the last academic year, the government Girls Higher Secondary School Kulgam has recorded a pass percentage of 95 per cent in the secondary and higher examinations.

The Principal of the school Chand Krishan Pandita says that at least 351 students of secondary and higher secondary were enrolled in the institution last year in which 186 students had bagged distinctions and a total pass percentage was nearly 95 per cent.

He says that the school has around 40 classrooms and a pond in the courtyard.

The principal also says that the school on average fetches around 900-1000 admission in one academic year.

“In our school, the Teacher Pupil Ratio (TPR) is being continuously monitored and managed to keep the consistency of quality education. Currently, we have teaching strength of 21 persons and non-teaching with 18 persons respectively,” Pandita said.

In the meantime, the Chief Education Officer (CEO) of south Kashmir’s Kulgam district says that the TPR in the school is almost 1:25 and all the basic facilities to run the institution with quality education are available in the school.