Trekking: Good for you, not for nature 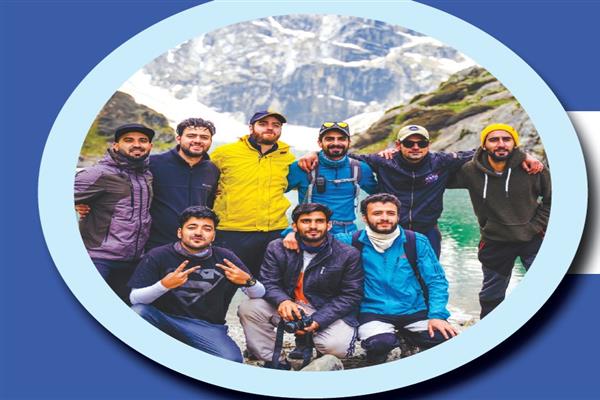 One of the most well-known sports in the Kashmir valley is trekking. Locals and tourists have been doing it for a long time, and they enjoy how it makes them feel. Various trekking clubs and organizations have sprung up in Kashmir during the last decade. Locals and tourists both visit these clubs as they have come up with "Sunday treks," which have received a lot of positive feedback from the youth and have been largely promoted via social media.

People have begun to show interest in the sport during and after the COVID period in 2020. "During COVID, we took all the necessary measures and followed the SOPs, yet we never stopped walking, " says Danish Dhaar, Founder, All Jammu Kashmir Mountaineering Foundation (AJKMF).

AJKMF is one of Jammu and Kashmir's top developing clubs. During the previous few years, the club has arranged a multitude of events ranging from the Pirpanjal Range to Stok Kangri, Leh, and has successfully completed over 200 treks.

"We meet at a specific spot early in the morning. There, we inform people about the trek and educate them about do’s and dont’s. Then we board the bus, bring our own meals, and begin our tour," he said adding, “We also make it clear that we must gather all waste in trash bags and dispose it off at appropriate locations.”

These clubs take all necessary precautions and are thus prepared to handle any challenging situation. The trekkers of these clubs have completed BLS (basic life support) and CPR courses, as well as professional mountaineering courses. They believe that knowing first aid and basic life support is essential since the weather on these terrains changes frequently, and problems such as breathing and chest pain can arise.

On their most recent tour, the trekking clubs received an incredible response, with more than 120 people joining them. They also accompanied Bollywood actress Sara Ali Khan on her trip to Tulian Lake, near Pahalgam. The mission of these clubs is to attract the youth to adventure and make them feel relaxed and less stressed.

They believe that today's lifestyle is too hectic and energy-intensive and that we barely have time for ourselves. Spending time in nature, away from the internet and disconnected from the rest of the world, provides everyone with the energy to combat today's lifestyle, and that everyone should take advantage of it.

During COVID, Xulkarnain Dev met Qazi Asrar, Aquib Bashir, Syed Adeel, Shaheem Bhat, Mauzam Khan, Burhan, and Zayer Farooq on Instagram with similar interests in photography and trekking.Later, they formed a group called "HALT," which refers to High Altitude Lake Trekkers. "We posted pictures on our social media and people used to ask us where it was, so we thought, if we know places, then why don’t we take people with us?"

For their first trek, the group travelled to Dumail for a day in July of 2021. "The response was amazing! We did not expect such a good response. We were honoured to plan the trip,"Xulkarnain said.

With music band Alif and singer Yawar Abdal on board, HALT has also organised "musical nights" at Gurez and Gangbal Lake. "We did not anticipate such a positive response. People stayed with us and were unwilling to leave, "says Xulkarnain. "The response to the idea of ‘musical nights’ was really positive," he adds.

HALT has completed over 20 treks at various locations including Chuharnag, Mamneth, Dumail, Tulian Lake, Gurez, Gangbal, and more. They are actively seeking out more mountain expeditions in the near future.

Another hiking enthusiast, Sheikh Abdul Wahid, enjoys going on trips and discovering new spots in Kashmir. He once collaborated with Discovery channel to discover new and uncharted areas in the valley, and he visited a number of interesting locations, including the "heart-shaped lake" on Margan Top.

"Being in nature is fun. I go for hiking to connect with nature, but I'm disappointed that people don't care for these places," Wahid told Rising Kashmir.

He has observed a lot of waste products including plastic, wrappers, and bones in these far off areas and is concerned about the future of these areas who seem to get polluted day by day. "I've visited Gangbal's freshwater lake, and I recall it being rather lovely. But, today I see plastic, bones, and discarded food floating in the lake. "

Wahid believes that all of these hikers come to these sites to enjoy their time, but they don't care about the environment. People are unaware of proper garbage disposal and trekking and camping rules, he says.

"Many people associate trekking with other sports such as rock climbing and hiking, and as a result, lack the necessary expertise and equipment for this sport. People frequently arrive at treks unprepared, without reading the norms and restrictions that must be followed in these locations. They frequently lack basic equipment, such as shoes, which is critical in these environments. They also lack other essential items like wind cheaters and sticks, which are essential for any trekker, "Wahid said.

Wahid recalls seeing a British man sitting beside the river on a school trip. Their teacher requested them to remain silent so as not to disturb him. Wahid and his friends were curious as to what he was up to. Later, they learned that the British man was capturing the sound of the river running, as well as other natural sounds. These recordings were utilized in "water therapy," which has a number of spiritual and mental health advantages, he recalls.

Numerous psychological studies have proven that the sound of running water has a positive influence on our minds. Many people have used the sounds of rushing water in meditation for years because they are naturally soothing. So this is one of the many ways that nature assists us, Wahid said.

He also mentioned that people have started building huts and resorts in the vicinity of hiking locations, which has diminished the value and substance of the journey. Apart from that, the construction of these huts and hotels in the jungles has caused wild animals to migrate downstairs in search of food and shelter, causing harm to the residents as well as their crops and cattle. "It is not them who are intruding on their homes; it is us," he explained.

"We should strive to spread more knowledge on environmental protection and the care that must be taken when hiking in the mountains. People should step forward and organize "cleanliness drives" in these mountains, collecting all of the plastic and waste and disposing it off at appropriate locations. Apart from that, people should know what to do and what not to do in order to protect the flora and fauna found in these lovely valleys, "he concludes.