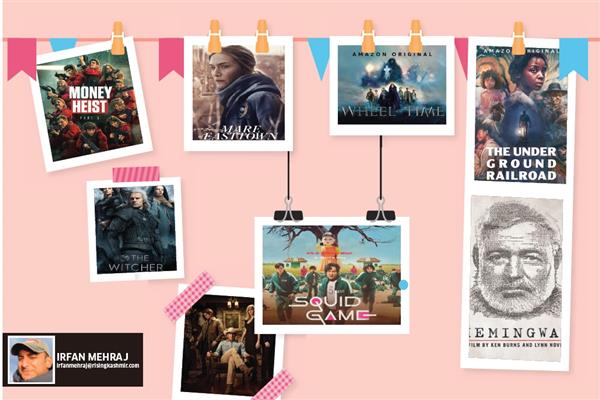 Since the emergence of OTT platforms like Netflix, Amazon Prime etc., television shows or serials have had a resurgence among audiences across the world. No less than in Kashmir. We all enjoy binge-watching entertaining TV and especially in winter as we see in Kashmir. During the harsh cold, nothing perhaps feels better than being glued to a screen - a TV, mobile, or computer and watching the latest episode of your favourite TV show.

In this week’s Sunday Special, Rising Kashmir’s sub-editor Irfan Mehraj lists some of the best television serials to enjoy amid the ongoing Chilli Kallan (the harshest 40 days of winter in Kashmir). When the weather outside is cold and grim, watching these serials can be both uplifting and brain-stimulating. The list includes shows and serials across platforms like Netflix and Amazon Prime etc.

When this South Korean serial was released by Netflix in September this year, it broke the internet. Like literally. Within no time, the show became Netflix’s most most-watched series of all time. The show has a gripping storyline. Directed by Hwang Dong-hyuk, the show is survival drama at its gripping best. Based on a popular Korean game - from which it takes its name, the series is about a contest where 456 players, who all have one thing in common - i.e., they are all in deep financial debt and want desperately to get out of the vortex of poverty, and these players enter the contest and risk their lives to play games in order to win a massive cash prize. Now, these are not ordinary games with no harm or consequence. If you lose, you die. This centrality of death in the show is what makes it brilliant television.

Squid Game is a great social commentary on the pitfalls of dangers of the capitalist structures in our society and what these structures can do to people living within it. The characters in the show showcase performances that are not only convincing but makes you feel deeply for them. The show can be streamed on Netflix.

Who doesn’t love this show is an irrelevant question to ask as it shall be the rarest thing in the world to find a person who hasn’t enjoyed this Spanish sensation. Everyone loves this show. It's perfect entertainment. It’s Netflix’s one of the most-matched series as well. The story follows a group of robbers, led by the charming and brilliant Professor (played by Alvaro Morte) who not only rob the Royal Mint of Spain but get away with it and do it with aplomb. Created by Álex Pina, the show has a classic sense of drama - each episode leaves the viewer hooked and wondering what happens next. This year the creators of the show delivered its fifth and final season (in two parts). Although not as good as the second and third seasons, the final season has its moments. The robbers, played by an excellent cast, rob the Bank of Spain of all its gold. The show has some upsets and a not so convincing ending. The show can be streamed on Netflix.

An American crime drama series, the series follows Mare Sheehan (played by the glorious Kate Winslet), a police detective investigating a murder of a teenage girl in a tense town she lives in, where she has become both a hero and villain. Winslet is at her dazzling best in the show. Her acting is underscored, tense and subtle. The storyline not only zooms in on her search as a detective but also focuses on her personal life, which is breaking at the seams. An absolute must-watch for those who enjoy crime dramas. The show has garnered rave reviews from critics and has been lauded for its performances. Winslet won an Emmy award for her acting, which was only due. The show can be streamed on HBO Max.

4. The Wheel of Time (Amazon Prime)

The Wheel of Time, released by Amazon Prime in November this year, is based on the novel series of the same name by the American author Robert Jordon. Rate Judkins is the creator of the show. An epic fantasy series, the show had a lot of hype surrounding it and has mostly been successful in meeting expectations. As of writing this, the first season of the series has garnered attention and praise. The series centers around Moiraine (played by the haunting Rosamund Pike), who is a member of the powerful all-women organisation Aes Sedai. They are seeking a group of five villagers. The Aes Sedai believe that one of the young villagers is the reincarnation of the Dragon, a powerful character who broke the world. The show is stimulating fantasy and tells us how deep the world of fantasy can be and how brilliant stories can be borne out of it. The show can be streamed on Amazon Prime.

Based on the Pulitzer Prize-winning novel of the same name by American novelist Colson Whitehead, the show was adapted to a series by Berry Jenkins for Amazon Prime. The series is a historical drama series about Black people trying to escape from slavery in the deep south in the United States during the 1800s. The series employs the use of magic realism as a stylistic technique to tell this story and it is fantastic at that. The story is based on a real story. Across the deep south in America, slaves would traverse what was known then as the Underground Railroad to escape from slavery. The series is as good as the book. Don't miss it. The series can be streamed on Amazon Prime.

Hemingway is a three-part documentary series on one of the greatest American authors of the last century - Ernest Hemingway. Not a single minute of this documentary, produced by Ken Burns and Lynn Novick, is dull. The series recounts in detail both the public and private life of novelist Hemingway, right from his birth in Oak Park, Illinois in 1899 to his death by suicide in 1961 in Idaho. What is gorgeous about this 3-part series is its detailed attention to Heminway’s writing in the backdrop of his personal life - which includes his turbulent four marriages, his kids, and his service in wars. The series uses archival footage to tell this story and this is what makes it interesting. We don’t not only hear people and other established writers also talk about Hemingway; we hear his life story in a spellbinding narration. The series is available to watch on PBS.

Starring Kevin Costner in a role that not only suits him but one which he has made his own, Yellowstone is a series that gets better and better with every episode and season. An American drama series, created by Taylor Sheridan and John Linson, the first season of the show premiered first in 2018 and the fourth season is currently being premiered on Amazon Prime. This slow burn of a series follows a cast of characters on a massive ranch in Montana. Duttons own the largest ranch of the state called Yellowstone. John Dutton is the head of the family who is fighting a war - with the world and his family, to save his ranch. What follows from this central plotline is a show that can best be described as singularly brilliant. Every single character in the movie is a revelation. The show is a perfect sort of series to be enjoyed during long arduous hours of harsh winter in Kashmir. All four seasons of the show can be streamed on Amazon Prime.

The second season of the acclaimed Netflix series The Witcher was released earlier this December and going by the talk on social media - the second installment is as good as the first one. The Witcher is pure fantasy. Created by Lauren Schmidt Hissrich and based on the book of the same name by Polish writer Andrej Sapkowski, the story follows the travails of Geralt of Rivia and a princess named Ciri. The two’s fate is entwined. The show is laced with fantasy and has glimpses that will make viewers Game of Thrones - another great TV series clap in praise. Packed by brilliant performances by Henry Cavil, Freya Allen and Anya Chalotra - the series is a must-watch fantasy series. Both seasons of The Witcher are available for streaming on Netflix.