TIME TO ACCEPT THE FACT OF GENOCIDE OF PANDITS

All available evidences and witnesses confirm that the government in J&K headed by the NC & Congress and at the Centre by Congress from 1986-87 to 1989-90 miserably failed to protect the lives, places of worship and properties of Kashmiri Pandits in Kashmir 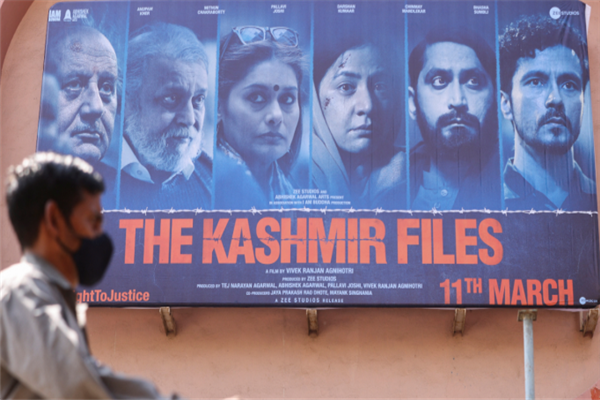 The recently released Bollywood film, The Kashmir Files, has generated a lot of discussion and debate on the issue of Kashmir and Kashmiri Pandits at a national level, once again. For most of the people, The Kashmir Files is a true saga of events of 1989 and after in the Kashmir valley. It symbolizes the pain, torture, humiliation and exodus of the Pandits who were given an ultimatum to 'convert, run or perish' (Raliv, Chaliv, Galiv) in the Kashmir valley, before, in and after 1989. However, there were attempts made by a number of vested interests to put the truth of Kashmir under carpet and continue with their attempts to target the Pandits, and they continue the same even on date.

The ethnic cleansing of the Pandits from Kashmir was showcased wrongly by varied political & human rights organisations & groups as well as by the mainstream section of the media as a 'simple migration of people'. They deliberately created a facade about the events and hatched a conspiracy to malign Jagmohan, the then Governor of J&K (22 January, 1990-26 May, 1990), for the forced mass-exodus of Kashmiri Pandits. It was done to keep the world in the dark about the true picture of Kashmir and Kashmiri Pandits and lend support to terrorism guided by the communal and secessionist movement in Kashmir.

With the release of the movie, this author is reminded of our attempts aimed at taking the issue of genocide of Pandits to the National Human Rights Commission in 1994. All successive governments failed to take cognizance of the decision of the NHRC that 'the Kashmiri Pandits were the victims of acts akin to genocide in Kashmir'. The NHRC also observed in 1999 in its decision that 'a genocide type design may exist against the Kashmiri Pandits in the minds and utterances of the terrorists in Kashmir'.

There are elements in the society who call the film a 'hate propaganda'. They do so either because they are ignorant of the facts or have a hidden agenda including a desire to keep the truth hidden in the buried history. Some political parties have also reacted sharply to the film. The Congress, National Conference and PDP are in a perpetual habit throughout to advance a false narrative regarding the Kashmir situation to mislead the public opinion. This time their statements in respect of the film, The Kashmir Files, are a testimony of the same fact. Their denials regarding the gory events of 1989-90 in Kashmir and falsification of historical facts can’t hide the truth from the world for a long time now. The film has uncovered the ugly face of brazen lies and half-truths about Kashmir.

The statements made by the NC leader Omar Abdullah and PDP leader Mehbooba Mufti in regard to the film which is based upon historical facts that led to genocide and exile of Kashmiri Pandits, are misleading. They are advancing a false narrative about the facts of history regarding the ethnic cleansing of the Pandits in Kashmir. The film has highlighted the failure of the political leadership, administration of the state and also of the government of India in a befitting manner. The argument that the Kashmiri Pandits had not been subjected to genocide in Kashmir has since been sent packing. There existed always an intent to ethnically cleanse Kashmir of Kashmiri Pandits which has been well depicted in the film. Moreover, the genocide of a community or a race is not about the numbers, it is about the intent of the crimes committed against them.

The issue of their genocide brew up in the recent history in February 1986 when 40 temples were burnt and razed to the ground in the Kashmir valley along with the properties of the Hindus. At that point of time there was the government of Gh. Mohd Shah supported by Congress in J&K. Those who were later arrested by the administration for these heinous crimes included a large number of Congress workers in the valley, a few of them were very closely associated with the then Congress state President, Mufti Sayeed. The Congress government at the Centre, eventually, was compelled to withdraw the support to the government and declare Governor’s rule in the state.

Thereafter when the situation worsened as the NC and Congress alliance took over after the Assembly elections in 1987 in J&K, reports after reports were dispatched by the then Governor of the state, Jagmohan, the Congress appointee, to the Central government. The Central government headed by Rajiv Gandhi as the Prime Minister failed to take cognizance of such reports and an  appropriate action thereupon. When the state government headed by Farooq Abdullah released 70 dreaded terrorists who were trained in POJK and arrested by the JKP, it worked as a big boost in favour of radicalism and terrorism in Kashmir valley.

The brutal killings of Kashmiri Pandits started in 1987 and continued up to January 1990 when Farooq Abdullah abdicated his responsibilities as the Chief Minister and made an exodus to London. In fact it was he who led Kashmiri Pandits to mass exodus consequent upon their selective killings and mayhem in Kashmir. All available evidences and witnesses confirm that the government in J&K headed by the NC & Congress and at the Centre by Congress from 1986-87 to 1989-90 miserably failed to protect the lives, places of worship and properties of Kashmiri Pandits in Kashmir. The J&K government headed by Farooq Abdullah was seen conniving with the secessionist and terrorist forces and the Central government headed by Rajiv Gandhi was seen completely ineffective, wittingly or unwittingly, to handle the situation.

There was a colossal failure of civil and police administration in entire Kashmir valley; and kidnappings, bomb blasts, selective killings and genocidal actions against the minority Kashmiri Pandits had become an order of the day. The holocaust of 19 January, 1990 was the culminating point of surrender of governments before the fundamentalist and terrorist 'regime' in Kashmir valley. The NC and Congress in particular are responsible for the genocide of Kashmiri Pandits at the hands of the fundamentalist and Islamic terrorists in the valley; and only a Court of Enquiry and/or a Special Crimes Tribunal will be able to bring justice to the forsaken community. It would be advisable for the leadership of NC & PDP to abandon their habit of propagating lies and half-truths about Kashmir, as their fake arguments have lost their relevance.

The Congress has been squarely responsible for death and destruction in Kashmir as it pursued the policy of appeasement towards the anti-national elements, separatists and terrorists in Kashmir. It was Manmohan Singh as the Prime Minister who invited the dreaded terrorist Yaseen Malik to his office. The same terrorist had killed Indian Air Force personnel in Kashmir in 1990 and was deeply involved in the genocide of the Pandits besides money laundering business in Kashmir. It is time now to bring the culprits to justice and thus establish a mechanism to have an inquiry into the excesses leading to crimes against humanity.

Kashmiri Pandits have been awaiting justice for the last more than 32 years for what was done to them before, during and after the mass exodus from Kashmir. This is the appropriate time for the government to establish and institute a Special Crimes Tribunal to go into the issue of genocide against the Kashmiri Pandit community and the other minority communities of Jammu and Kashmir who bore the brunt of terrorism in J&K for the last thirty-five years. Three decades of long struggle slowly and steadily brought the Kashmiri Pandit community out of the “trauma of victimhood”. Their long struggle in exile at both individual and collective level paved a sense of relief to them that they were able to survive and move ahead due to their hard labour, application of mind, converting opportunities into ventures and according value to relations with the new neighbourhood, friendship and fraternity-feeling outside Kashmir valley during their exile.

The Pandits made it sure that they don’t forget the facts of history but with the passage of time they exhibited their age-old ethos of forgiveness. While expressing their anger against the tragic events of brutalities, they maintained the decorum of language, debate and discussion. This helped the Pandit community to grow in a cultural-spiritual sense. They have indeed created a high moral ground in the overall scenario pregnant with a lot of political upheavals and changes.

With the change of narrative on Kashmir over the last a couple of years and particularly now with effect from release of the film, The Kashmir Files, there is an opportunity for the Kashmiri Muslim community, governments, administration and intellectuals of the society to accept the hard fact of genocide against the Kashmiri Pandits, the indigenous people of Kashmir. For all, it is virtually, now or never.