Tickle your taste buds with Harissa 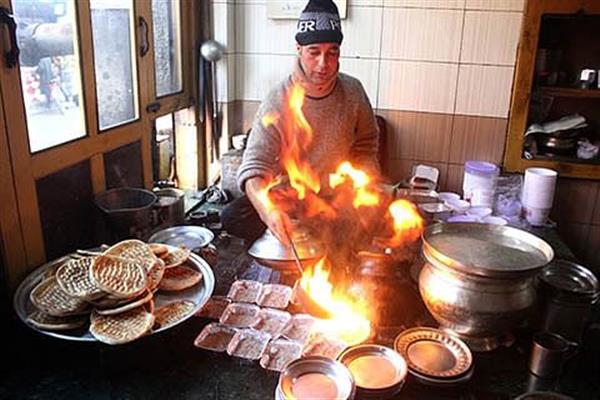 Favored by rich and poor alike, Harissa is a royal delicacy that has always accompanied the winter in Kashmir, ever since the Muslim proselytizers brought the dish along from Persia.

Although different varieties of Harissa are widely consumed around the globe, the Kashmiri Harissa is considered the finest one.

In Srinagar, especially in the streets of downtown, the morning gusts of the winter carry the wafts of vapor and mouthwatering odor erupting from the Harissa shops, and it builds a mood for a plate of rich and hot Harissa.

A plate of Harissa, tempered with oil, fried onions, and a few strands of Saffron, is a perfect match with a cold Kashmiri morning.

Some Harissa makers also bedeck their Harissa servings with MethiMaaz (a Lamb intestine and fenugreek dish) which renders extra taste and a fine aroma to the royal delicacy. At some joints, an occasional tiny Kebab also comes atop the Harissa servings.

According to Zareef Ahmad Zareef, the famous Kashmiri poet and historian, along with all the other meat-based dishes and delicacies, Harissa too was brought to Kashmir by Muslim proselytizers who traveled from Iran and central-Asia to Kashmir on proselytizing missions between the 13th and 14th centuries.

“Harissa is a part of our heritage. Before the Muslims came, the residents of the valley were either Buddhists or Hindus and therefore oil and ghee-based meat was not consumed. Along with Islam, the proselytizers brought a score of things to Kashmir, including Hammam, the Wazwan, and the Harissa.”

While painting a fine scene from the past, Zareef Ahmad Zareef says, “While they would revel in their Hammams, the rich, the prosperous, and the ruling elite of those times would be served the delicacy by their cooks in the morning, along with a cup of Kehwa. Later on, the practice caught up with the masses and became widely accepted.”

When the Muslims from temperate areas of central and south Asia arrived in Kashmir, the Harissa provided them with the required vitality to face the harsh Kashmiri winters. Previously, a goat’s meat, which according to the local belief warms up the body during the winter season, was predominantly used in the preparation of the Harissa. Additionally, the use of ground spices such as clove, cumin, cardamom, cinnamon, garlic, black pepper, fennel, and coriander, add a body-warming property to the Harissa.

The preparation of the Harissa begins with grinding the cooked rice and turning it into a thick paste. This rice paste, along with added spices and freshly minced meat, is then stuffed into a large earthen container, and with the help of a large wooden pestle, the mixture is stirred and squished for a considerable amount of time until the preparation does not gel and show the signs of a sumptuous paste. The preparation is then left to simmer overnight above a slow sturdy flame, and in the morning, yummy, mouth-watering Harissa is ready.

Zahoor Ahmad Bhat’s shop in the AaliKadal area of Srinagar’s downtown is considered the first and oldest surviving Harissa place in Kashmir. In appearance, with tin shutters and smeared blue paint, the place looks just like any other run-of-the-mill shop, but inside, a big earthen container holds what is considered the best Harissa in Srinagar.

With a wooden ladle, Bhat plunges into the container and takes out spoonsful of warm Harissa. This harissa is poured into ornate copper plates and then treated with hot vegetable oil, fried onions, and a tidily bit of MethiMaaz. Once served, the customers eagerly relish it with a crispy bread called ‘Girde’.

“This shop has been here since the times of Sufi saint Syed Ali Hamdani. It was set up by our ancestors at the time of the construction of Jamia Masjid (The Grand Mosque), Srinagar some seven hundred years ago.  I myself have been handling the family business for thirty years now,” Bhat adds.

At Bhat's shop, quality is the main essence. He says that he has neither any special technique nor does he add any special ingredient to the preparation, nevertheless, his Harissa is the most sought-after in Srinagar. “I think it's extra hard work, dexterity, and care that makes our Harissa the best.”

Not only in Srinagar or throughout the valley, but Zahoor Ahmad Bhat’s delicacy also has admirers in foreign countries.

“Our Harissa is very much liked in Britain and Saudi Arabia. We have customers from Dubai as well as from other places in the world. The traveling kith and kin of those Kashmiris settled abroad often carry our Harissa to foreign places,” Bhat says with pride.

Of course, a delicacy from Kashmir must not only rouse the feelings of home and homeland in Kashmiris settled abroad, but it must also be the stimuli that make them recall the bygone glory of the valley – the taste of Wazwan, the Kehwa, and the Pulav.

Zahoor’s father, Ghulam Ahmad Bhat alias Ama Lala, who is bent over a chopping log in the corner and deboning the meat, says that he has served Harissa with his own hand to almost all the famous personalities of Kashmir, including Sheikh Abdullah, Ghulam Mohammad Sadiq, and Bakhshi Ghulam Mohammad.

Ama Lala has been honored by the government of Jammu and Kashmir as well for promoting the Kashmiri Harissa all over the world.

Though Ama Lal is in his declining years, he is still contributing to the efforts of his son and does all sorts of minor chores at the shop.

According to Zareef Ahmad Zareef, the Bhat family shop was the first Harissa place that was set up in Kashmir valley, and it was this very shop that gave the ordinary people a taste of the royal delicacy. Before its establishment, only the cooks of the elite were known to cook the Harissa.

Subsequently, after the establishment of the Bhat Harissa joint, a defecting member from the family set up another shop at Saraf Kadal and two more shops followed at Fateh Kadal and Saria Balla. Up until the Dogra times, since the period of Persian Sufi Syed Ali Hamdani, these four joints were the only Harissa places in Srinagar. Later on, when Harissa found wide acceptance and common people became affluent enough to afford Harissa, many other shops mushroomed within the city.

Dilshad Harissa joint and restaurant, situated at Maisuma Srinagar is one amongst those many lateral entries in the commercia of Harissa-making in Kashmir valley. Unlike the heritage Harissa joints, which are only open in the morning and work predominantly for special orders, this particular shop is open throughout the afternoon to the tread and taste of every Harissa-loving person in Kashmir.

Overhead, at the entrance of this shop, a witty quip meets the eye: Harissa Zafrani – Tohfa Irani; YaadRakhoZabani – Ye DukaanhaiPurani; IskoKhataihaiKhandani; KhayaiBuudha, PayaiJawani; iss Mai na Koi dukh, Na koi beimari — (Saffron Harissa – A gift from Iran; remember, this shop is old and Harissa is the delicacy of the gentry; would become young, even if consumed by the old; there is neither any pain nor any ill in Harissa).

“Harissa is a lovely dish. It’s not that only Kashmiris are in love with it, but people outside are very fond of this delicacy as well. Every day, we get orders from other Indian states and foreign countries. This implies how much people love our Harissa,” Mohammad Ishaq, a fourth-generation Harissa maker at the Dilshad Harissa shop said while speaking with Rising Kashmir.

A special packaging that can survive the long journey is arranged for the orders placed from faraway places. A few years ago, Bollywood film star Ranbir Kapoor was reported by a TV channel saying that he has Harissa every morning instead of his breakfast, and gets the delicacy directly flown from Kashmir valley during the winter months.

Nowadays, some websites sell the packaged Harissa online as well, but these online outlets cannot guarantee the savor and richness of the Harissa that is served right out from the Matka (Earthen container).

Pertinently, Harissa is not only restricted to outdoor joints and restaurants. Kashmiri women have also mastered the Harissa making. Many mornings are cherished with a home-cooked Harissa in Kashmiri homes during the winter season. People often post pictures of their homemade Harissa on their social media sites during the winter.

But like many precious things from the past, some people fear that Harissa too may succumb to the onslaught of modern times.

Arafat Gul, 34, has been running a Harissa joint at Srinagar’s Chattabal area for almost a decade now. He fears that due to the grit, hard work, and energy required in making the Harissa, the younger generation may feel disinclined towards the trade and the traditional shops may cease to exist in coming years.

“The Harissa making requires a lot of effort and there is not much money in it. I hardly get any sleep during the winter months and spend almost 15 hours a day producing the perfect delicacy. I fear the coming generation may not opt for this sort of hard work, but at the same time, I don’t feel that Harissa would go completely extinct. In the coming years, our fancy restaurants may carry the legacy forward,” Arafat hopes.

Arafat’s words hold a ring of truth to them. Given the love and taste that Kashmiris espouse for the royal delicacy, it seems Harissa is going to remain for a little longer; though it may not remain in the same manifestation as it does presently, it would remain nevertheless.