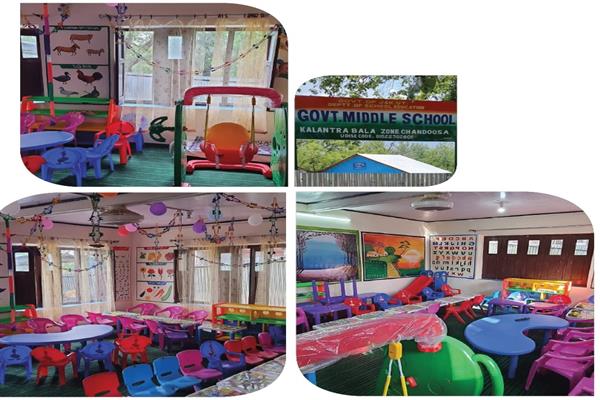 It’s the quintessential public education success story. Driven by Saleema Ghulam’s passion, sacrifice and drive, an entire village has come together to participate in this school’s success.

This is one of the model government schools in Kashmir having a kindergarten facility and has become an example and improved their enrolment and found good results. It was developed only after Saleema was posted there.

Hailing from a nearby Nambalnar village, she was appointed in the Education Department in 1997 and was first posted in Government Higher Secondary School, Kreeri and also served in various educational institutions in the area.

Five years ago, when Saleema joined the middle school as headmaster, she was surprised and pained by the condition of the school and its surroundings. She couldn’t bear it and worked hard to transform the decades-old institution and developed it entirely.

Notably, the school has the distinction of being the oldest school in the area, which was once a central institution as students of adjoining villages would participate in primary and middle-class examinations there.

“When I joined the school, there were four buildings of which two were unsafe comprising of five rooms. There was no fencing and it wasn’t looking like an institution but rather a public place. In the first attempt, we demolished two buildings that paved way for the construction of the new building,” she said.

Apart from that, the school was having no fencing but with her efforts, the school got properly fenced and maintained its ground to conduct sports activities for students that they missed otherwise. For the female headmaster, school fencing was a daunting task.

“Before that, there were a lot of illegal encroachments and those were removed despite huge public outcry. There was no sanctity,” she said.

Today, the school looks very beautiful inside out and it has been maintained very well. It has become a model government school in the entire area.

“Earlier, even people used to sit outside school buildings for late evening hours. There were huge harms to the entire buildings,” the headmaster said.

In July 2021, despite the Covid-19 situation, the school started a kindergarten (KG) section after which the roll of students was improved.

Today, the KG section has a total roll of 62 students. With the hard work and dedication of the headmaster and its local school teachers, today the school is having a total roll of more than 180 students.

“The classroom of KG is decorated beautifully and colourfully. The atmosphere of the classroom has been made conducive so that children stay there without any disturbances,” she said.

“Once the children enter the classroom, they feel that positivity. We have also put one LCD in the classroom and by which we teach children English, mathematics and other languages on the LCD through the play-way method,” she said.

The headmaster said she encouraged and accompanied the teachers to go door-to-door to encourage parents to enrol their children in the school for which they worked hard.

The kindergarten facility is given only to those schools having good enrolment in preprimary classes.

“We are thankful to CEO Baramulla who sanctioned this facility for the school. These facilities are available in some government schools only,” Saleema said.

“The pre-primary children of our school are updated with today’s technology. I am sure that it will encourage more children to join our school and push this mission forward,” she said.

The children are taught with the play way method. For the recreation of children, the school has made available modern equipment. In the same room, there is a facility for sleeping, playing equipment, and learning as well.

“Once we see that children feel bored or burdened, we tell them to play with this equipment. They do not need to go out to play. Every facility is in the room,” she said.

The headmaster said since the kindergarten section was established in the school it has helped the school to improve the enrolment.

“Enthusiasm is very important for children, especially in pre-primary years and classes and thankfully we have taken lead in that,” she said. She said the children of kindergarten are never seen absent.

“Even if it is a holiday they keep asking before a day. It has also helped parents to not allow children to sit at home for many days” said the senior school teacher.

The attendance of primary classes is always 100 per cent. The school teachers call it a moment of pride. The headmaster said literacy and numeracy skills are found to be an important foundation for education.

“Through fun activities like drawing, colouring and listening to stories, kids learn these skills. Learning these skills at an early age leads to greater academic success in future. They are introduced to basic numbers, shapes, and words that help them grow as a learner,” she said.

Kindergarten allows kids to develop their social skills. They build relationships with other children and learn to grow with them.

“They adapt to habits like sharing, taking turns, communicating their ideas to other people, and most importantly they become independent. Children who attend kindergarten are known to be more emotionally resilient as they are exposed to understanding the emotions of other kids,” Saleema said.

The headmaster said that social and cognitive skills are highly developed through the kindergarten program.

“Kids develop a positive attitude towards learning when they are introduced to new ideas through fun and playful activities. It helps them settle in primary school in a better way with confidence,” she said.

Apart from these positive impacts, kids also develop good habits in their daily routine through the learning they receive in kindergarten. They become independent and feel confident completing small tasks by themselves.

“From brushing their teeth to washing hands properly, they start taking charge of daily activities that make them more responsible. A structured environment like kindergarten helps them get into a good routine and makes life easier for both kids and parents as they learn how to cooperate in different situations and be calm,” she said.

To address poor enrolment numbers, Saleema did conduct a household survey. She had a fair idea of how many children each household had and the family’s income, but she along with teachers went to individual homes and verified this information.