The Resolve of Para Cricketer 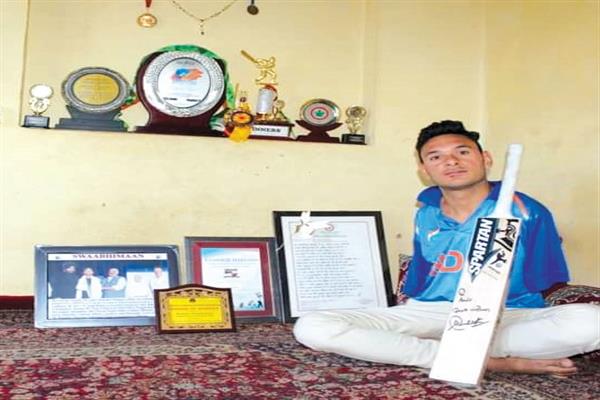 Losing both arms to an accident in a bandsaw mill, Amir Hussain Lone, 27, did not lose the spirit to play cricket and now represents Jammu and Kashmir's state-para team at the national level.

Hailing from Waghama village of Anantnag district in south Kashmir, Lone is an all-rounder. One may be wondering how a boy without arms can bat and bowl, Amir is the answer, he does it!

He bowls using his feet, places the ball in between toes and the thumb of his right foot and throws it perfectly towards the batsman. While batting, he holds the bat in between his chin and neck and drives!

In 1997, Amir lost his arms in an accident at his father's sawmill. His father sold all his properties to treat Amir.

After losing both of his arms, Lone told Rising Kashmir that he did not let this disability become a roadblock in his dreams, rather he tried to be practical and started to play with the ball and bat with his feet.

Recalling the trauma, Lone said he was reading in Class II and had gone to drop the lunch for his brother who was working there and while playing got entangled. As a result of which both of his arms got amputated.

“Local army unit came to my rescue and shifted me in their vehicle to Bone and Joint Hospital. We faced a lot of hardships due to the situation at that time. It was a very hard time for me,” he said.

“People would tell my father that I will become a burden on him. I thought, no, I will not let that happen and decided to fight,” he said.

With time, Amir learned how to bathe, eat and put on clothes all using his feet. He even taught himself to read English and write with his feet. His father never gave up on him and supported him in the journey.

However, he said with the grace of Almighty Allah and faced every challenge with zeal and determination, I never lost hope and didn't look backwards. I had to face a lot of struggles in life, but never gave up," he said.

Amir recalls how his teacher asked him to go home from school.

“My grandmother Fazi Begum played a vital role in my life and motivated me to return to school after the gap of three years, telling me to focus only on studies and not pay heed to anyone,” he said.

However, courage and determination have helped Amir to overcome the taboo of disability and become the only double-arm-amputee Cricketer in the state and arguably in the rest of India as well.

Amir finished his first year of college at Government Degree College in Bijbehara, Anantnag, where a teacher recognized his cricketing ability and later became the captain of the J&K para cricket.

The young boy’s steely resolve and practice eventually earned him the position of team captain, as well as a lot of attention throughout the Valley.

Lone has represented India in cricket in Delhi in 2012, Lucknow in 2015, Kerala, Mumbai, Gujrat, and Hyderabad. He’s also got the chance to play in the Dubai Premier League and in 2017 played international matches in Pakistan and Bangladesh.

“My inspiration is Sachin Tendulkar and I want to play like him. My dream is to play for the national team,” he said.

Amir recounts when JK played against Kerala, in which he had scored an unbeaten 25 runs off just 18 balls. "The opposition carried me on their shoulders and shouted slogans to encourage me. It was a moment that overwhelmed me," he said.

Apart from that, I am a regular bowler in my team. I want to continue this passion in my entire life, he said.

In the year 2016, Indian cricketer Ashish Nehra sponsored my trip to the T20 world cup final in Mumbai against West Indies. It was my dream day, I met all the cricketers including Ajay Jadeja and others.

In 2019, veteran cricketer Sachin Tendulkar sent me a bat, along with a signed t-shirt as a gift to me.  It was the best day of my life, he said.

“All credit goes to his family who stood behind him like a mighty mountain. They always encouraged and boosted my confidence,”

About the message for the youth of valley, he said anyone who is disabled naturally or met with some tragedy but there are always opportunities for such youth.

The main thing is that their families should support and accept them. They should never lose hope as part of their lives, he said.

Amir has also been roped in by Rahim Greens, the social arm of Rahim Motors as its social brand ambassador, and employed by a private firm RAMKY Infrastructure.

“The government is neither serious about the welfare of the disabled nor is it concerned about the promotion of para cricket in the state. Our para team is not provided with a coach. I teach my players myself,” he said.

Quoting lines of a famous scholar, Robert M. Hensel, he says we, the ones who are challenged, need to be heard.

“To be seen not as a disability, but as a person who has and will continue to bloom. To be seen not only as a handicap but as a well intact human being,” he said.

Amir hopes to eventually get a job under the sports or disability quota so he can better concentrate on his game.

Recently, Mumbai-based film production house ‘Pickle Entertainment’ which has been in film distribution business has announced a biopic on Amir. The biopic will feature the struggle of 27-year-old Lone who lost his arms in an accident in 1997 when he was just eight years old.

The biopic will be made in Kashmiri and English languages so that it can cater to an international audience.  It will depict the world’s armless cricketer who can both bat and bowl without any support.