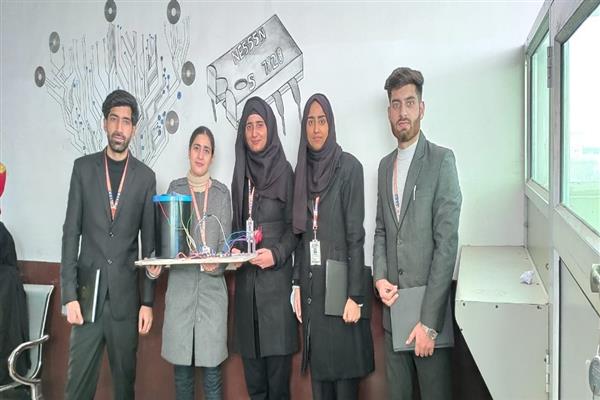 The adulteration and fuel theft at fuel stations is something, most consumers believe is happening. There are instances where such cases come to the fore. This crisis has intrigued a group of five engineering students to come up with a solution to the problem.

Sabreena Geelani, QaisiriShowkat, Qurat ul Aien, Ruhullah and Javaid Ahmad Bhat, have innovated a prototype that will monitor both, the quality and quantity of fuel.

The ideation for such a novel prototype was triggered by social media. “Usually, we see people complaining of the fuel theft and adulteration at the fuel stations, I have seen many such videos there,” said Geelani. She discussed the same among her friends and asked them to explore if anything can be done to address it. There, they agreed to work collectively on the project.

The fivestarted workingat a private lab ‘Kashovatics lab,’ a research and innovation institute at Dargah Hazartbal.  Kashovatics lab provides novel youngsters with a chance to give their ideas a practical shape.

Geelani said that the quantity of fuel delivered at petrol pumps has become a trust issue and customers feel cheated frequently as they are dependent on the server.

She said, “Petrol is commonly used as a fuel in vehicles but nowadays petrol that is being sold is not of good quality.  We are also not sure about the quantity of petrol filled at the petrol station. These are the major issues faced by consumers nowadays. The device made by us can solve both the problems.”

The add-on module can be fitted with the vehicle and it precisely monitors the quality and quantity of the fuel in the tank. The module comprises a headpiece and a tailpiece. The headpiece comprises a processor, LDR, power generator, battery, Bluetooth module and LED while the tailpiece comprising of a hollow tube, inside which an optical diffuser is placed surrounded by a light-weight ring. The base of the tailpiece is covered with a ring arrester which holds the ring within the tube.

For generating power to function the entire module, a thin film of solar panel and a mini wind turbine is mounted on the flip lid of the car. For displaying the real-time values, the LCD and the Bluetooth module is placed on the dashboard of the car.

Working on the project: The module works with self-designed sensors. It has an arrangement of concentric translucent flexible pipes housing a capillary action system that collects fuel from the tank and passes its volumetric and colour information to the sensor hub which is mounted on the cap of the tank.  The colour and transitivity information of the fuel is sensed by colour and light sensors.

For detecting the quality, another light sensor is placed at the bottom of the tube along with a colour sensor to provide a sensor fusion for detecting the quality of the fuel. The adulteration of the fuel is monitored by the transmissivity along with the colour of the fuel changes by the percentage of the adulterants added. The change in transmissivity and colour is sensed by the sensor fusion. These values get displayed on the LCD which is present on the dashboard and the smartphone of the user.

Geelani said, “This module can work for any type of engine. It must consume low power so we have used solar panels for it to generate the power on its own. We have also designed sensors on our own.”

Another student innovator, QaisiriShowkat said there are certainly vendor-customer issues. “The engine of our vehicles often gets damaged due to poor quality of petrol. The degradation of the engine can shorten the lifespan of a car,” she said.

She said that the government has permitted 10% ethanol in the petrol but the fuel retailers can add more than 10% of ethanol and other adulterants can also be there which can cause damage to the engine.

She also added that the poor quality of petrol can also cause environmental pollution. “The gasses emitted from the engine can pollute the environment and also cause respiratory problems. We thought of making a project which can be environmentally friendly. This will be an add-on module so that it can be used easily with any vehicle,” she said.

Talking about the future modifications, she said to avoid fuel theft outside the houses or in parking lots, a camera can be fitted which can record the activity and a sensor connected with the smartphone to alert the user. “It’s not possible for everyone to park their vehicle inside the personal garage. At places like parking areas are outside, people can steal petrol from the cars. In future we can also adjust the camera which will record the activity,” she said.

The students said the time spent on the project was almost a year.

Geelani and Showkat have made another innovation called ‘smart shoes’ for visually impaired people. The shoes have ultrasonic sensors which are used to detect obstacles. On detecting an obstacle, vibrations in the shoes will be generated, alerting the visually impaired person to change the direction. Showkat said, “The shoes were made to replace the stick and the person can walk on his shoes without anyone’s help,”

Showkat believes with their innovations, they can give something back to society. She said, “If you help society, it is a big achievement. While we were researching, we found no such device in the market. We are doing our bit to contribute to our society.”

The students under the guidance of Rouf ul Alam Bhat and JahangeerAurshad have made the project.  JahangeerAurshad who runs the Kashovatics Lab said, “Our students made a module from scratch. Taking the petrol crisis into consideration, the project is an important one. If we have no good quality of petrol, the vehicles will give less mileage. When you put kerosene or ethanol concentration more in the petrol run engines, the engines don’t function properly. The vehicles will smoke more and the environmental pollution will be more.”

He further said that the module with the help of a smartphone will show the nearest fuel station locations and also present the information regarding the quality and the quantity of petrol at those stations. He said, “Next time when you have to refill the fuel tank, the app will show you the nearest fuel stations and it will rate them according to your previous visit.”

Also, the said group has applied for the patient of the product. Getting a patient is not a cakewalk, as of now their application has been accepted by the Patent Authority of India and the authority has published the patent with the application number 202111050729.

To make this prototype a fully functional entity, and to take the project further, these five innovators are looking for sponsors. “We have also applied for a grant at IUST, but you know the university has its way of functioning and takes time,” said one of the five.