This is a study that is thoroughly researched, scrupulously argued, fair minded and elegantly written. It combines the historian’s rigor with the practitioner’s insight as well as a sane appreciation of the benefits and limits of hindsight 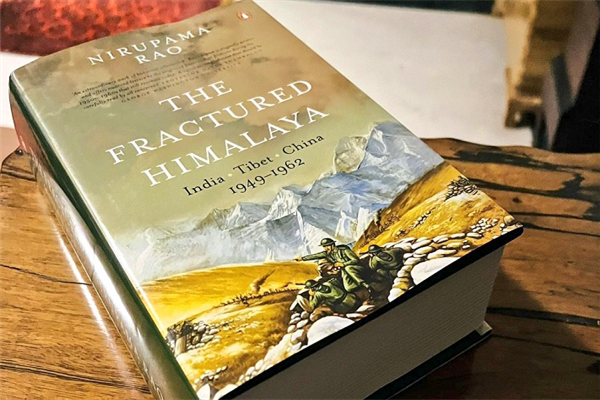 The day of 15th June 2020 dawned on the Indian sub-continent casting an ominous shadow on Sino-Indian relations for ever, which as it has been tenuous all these years. It further went spiraling down fast after the deadly Galwan clash in eastern Ladakh that took the nation by surprise. Though numerous books have been written by men and women of eminence in the past, both Indian & foreigners lying bare the dynamics of Sino-Indian relations, bedeviling both Asian giants but none comes closer to the subject as the recent treatise ‘The Fractured Himalayas- India, Tibet, China penned by none other than our quintessential Ex foreign secretary and also ex ambassador to China Nirupama Rao. Deftly weaving her mind and pen with such erudition and background knowledge of those fateful years i.e. from 1949 to 1962 Nirupama Rao has virtually rekindled a format of information, events, places and people that leaves you almost dazed with an intensely complex saga of those early years of Sino-Indian relationship that even today has proved to be an enigma for the present lot of our leaders.

In fact as a diplomat practitioner Rao’s erudite display of facts and figures is based not only on archival material but also on deep personal knowledge of China. By her detailed analysis of the labyrinth of negotiations and official interactions that took place between the two countries from 1949 to 1962, she keeps all the options open for a discerning reader to make his /her choice in a very cold, clinical and methodical manner. The book “Fractured Himalayas” published by the famous ‘Penguin Random house” in the year 2021 has a total of 609 pages with excellent black hard cover to top up with a glossy soft cover in a greenish brown hue depicting the snowy whites of Himalayas laced with Indian army posts and troops engaged with the advancing Chinese in combat . First two pages of this masterpiece are dedicated to ‘Advance praises” from who’s who belonging to the diplomatic corps – cum academic fraternity of the world which lends credence to the fact that Nirupama Rao has really put in her heart and soul into making ‘The Fractured Himalaya’, a standard bearer of modern Sino-Indian relations . She has very pointedly put a reader into a correct frame of thinking by giving the details of the ‘Major Dramatis personae’ in an alphabetical order who were the key players during those fateful years beginning from 1949- 1962 and arbiter of destinies of 96 crore people of both the Asian giants by way of dispensation of their decisions.

The contents of the book spans a total of 16 full chapters with an opening chapter devoted to both India and China on the anvil of just attained freedom, liberation and new found nationhoodafter having cast away centuries of yolk of imperialism. Nirupama Rao very deftly meanders through the narrow and convoluted labyrinthine of Sino –Indian relationship spanning through thousands of years of religious and cultural bonhomie cemented by the likes of Huen Tsang and FaHien, the religious wanderers from China. The ambivalent relationship of Nehru with the nationalistic forces of Chiang-kai- sheik in the early 20s and 30s was given a fillip by the ever wily British who fuelled Chinese suspicions that Nehru and congress party were more interested in their own dominance in Asia and less in Chinese meeting their own aspirations. The author has very methodically laid bare the initial ground breaking thinking about Indian leaders &bureaucrats in dealing with theirChinese counterparts in their type of nationhood with the likes of Nehru, Girija Shankar Bajpai, Sardar KM Panikkar, and KPS Menon etc trying to come to the grips of the situation in China as well as home with  the new found independence from the British.

The writer has very vividly given an account of Chinese disdain reflected in their print and voice media reserved for Nehru by uttering/printing  a nasty moniker attributed to him in so many words as ‘American running dog” ready as ever to their bidding in this part of Asia after Nehru’s visit to the USA in 1949. Surprisingly the mandarins of power in New Delhi didn’t update Nehru about the general feelings in Mainland China and his future tactics to engage them in diplomatic parleys. The book gives a very racy account of unconditional withdrawal of Indian posts and telegraphs stations, military escort stations and trade centers from places like Lhasa, Gyantse, Gartok, Yatung, Kashgar etc so assiduously built over a span of more than 40 years immediately after the Chinese intervention in Tibet in 1950. It signaled a unilateral surrender of Indian presence without much ado paving thus the way for further hardening of the Chinese stance in coming years when the thorny issue of boundary dispute blew full in our face much to the embarrassment of our national prestige and honor.

The chapters numbered from 1 to 4 of the book primarily deals with initial forays into diplomatic and cultural interactions of both the countries glowing in the new found halo of liberation from centuries of imperialistic hegemony gingerly . The testing of waters by both the countries in terms of their rooting for each other or otherwise in matters relating to  external affairs ,Geo-political pulls and pressures ,Taiwan , Kashmir imbroglio, and the most sensitive of all the Tibetan tangle dominates much of the portion. The initial pages of ‘The Fractured Himalaya’ deals with a multifarious of topics having concurrent importance and impinging over each other to include love-hate relationship with the 14 th Dalai Lama , unleashing of coercive methods to brow beat the clergy of Tibet into downright submission by the Chinese , emasculation of Kashag ( Highest governing body of Tibet) by way of signing the 10 point agreement in October 1950 which delineated self-governance in Tibetan autonomous region, no alteration of states ,function and powers of HH Dalai Lama , freedom to practice religion, conducting of reforms in accordance with the will of the Tibetan people and much more.

Nirupama Rao very understandably depicts in her book laying the foundation stone of peace, tranquility, and noninterference in each other’s matters, territorial integrity, sovereignty, mutual respect and so on in the form of signing of a new accord known as the famous “Panchsheel agreement” which was the high water mark as a testimony of statesmanship of Nehru –Chou en Lai duo in the Asian continent. Though both leaders displayed a marked degree of wariness towards each other in their physical and mental demeanour when together in public but  nonetheless maintained a façade of bonhomie and camaraderie as was visible to a trained eye.With Nehru flying high on the wings of idealism and world appreciation of his statesmanship in the light of his successful arbitration in the deadly Korean war, return of Chinese and Korean POWs, and leading the NNRC ( Neutral nations repatriation commission) the subterranean ominous signals emanating from the Chinese quarters on being short shifted  were given a go by . Chou En Lai on the other hand was a master in the art of ‘Real politiks” and grounded much to the evolving situation in the Asian continent. Accordingly he alerted his countrymen in terming the famous “Panchsheel agreement” valid only for 8 years to be precise. 03 years gaining of time for making China stand up on its feet after years of protracted war and further 05 years of timeline for consolidation of its strangleholds in Tibet. Thereupon as per his calculations China would be ready to take on any intangibles wrought by the expediencies of neighbouring countries.

In the intervening period of implementation of the famous Panchsheel agreement and full blowing of the boundary issue on India’s face ,the book mentions a very cautious approach bordering on pussyfoot mentality by India’s leading lights in raking up the border issue till as late as 1956 with China. This was a resultant of the nation getting fed on a potion of false optimism and a sense of Micawberish tendency in dealing the yellow race hoping something positive to emerge out of a hopeless situation which was never the case to be as events later reveal. Nehru basing his logic of carrying forward of the British legacy of 1914 Shimla treaty which narrowed on to border management, foreign linkages/ exchanges as enunciated in it became oblivious to a basic tenet of         Geo-political importance which clearly indicated that China being a bigger nation in terms of population, size ,economic and military might and just having tasted its victory in the national war will not consider India on equal terms once the British left Indian shores . Moreover with China not being a signatory to the 1914 Shimla treaty it was free from any encumbrances dumped upon it by India. As per Nehru ‘Our borders are non-negotiable”.

Chapter 7 onwards of the book details the nose dive of relations between both countries with disputed frontiers and divided mandate on the subject with each side sticking to its stance. As per Nehru”s biographer S .Gopal, he was insufficiently alert of the impending troubles brewing up in the high Himalayas guided as it is by his IB chief BN Mullick, defence minister VK Krishna Menon et al. The coup de grace was dealt when Indians “crossed the Rubicon”& occupied Dhola post in NEFA in Sep 1962, consequently inviting undivided retribution by the PLA on 20th October 1962 which still resonates as a blot on the Geo-political firmament of India.

All in all ‘The Fractured Himalaya’ is not the typical old wine in a new bottle served by Nirupama Rao, but new wine in a shining new bottle to be uncorked by a resurgent India ready to imbibe the lessons under the PMship of Modi who has typically infused the country’s resolve by taming the yellow race firstly at Doklam in 2017 and thereafter in Galwan in 2020.

The cost of the book with MRP at Rs 999/- shouldn’t be a deterrent to a true reader of Sino-Indian relations. This is a study that is thoroughly researched, scrupulously argued, fair minded and elegantly written. It combines the historian’s rigor with the practitioner’s insight as well as a sane appreciation of the benefits and limits of hindsight. The book deserves a wide readership, especially in light of where we are with China today.

(The writer is a retired army officer and RK Columnist. Email….slalotra4729@gmail.com)

Box: Though numerous books have been written by men and women of eminence in the past, both Indian & foreigners lying bare the dynamics of Sino-Indian relations, bedeviling both Asian giants but none comes closer to the subject as the recent treatise ‘The Fractured Himalaya - India, Tibet, China penned by none other than our quintessential Ex foreign secretary and also ex ambassador to China Nirupama Rao