'The architect of the new BJP': The book peeks into Modi’s BJP politics 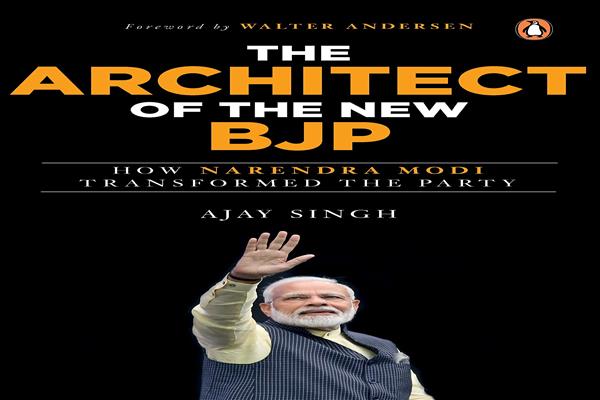 The architect of the New BJP: How Narendra Modi transformed his party, authored by a former political journalist, Ajay Singh, explains how the BJP has grown over the decades into the largest political party in India.

The book published by Penguin Random House India (PRHI), presents a story about how the experts of the cadre-based party developed an Indian model to build the organization and how Modi constructed different innovations to strengthen it.

In a short span of time, the book has garnered huge support from the people, making it a national best seller. Owing to its success, the book has gone for reprint for the third time.

The author, who started writing this book in 2017, brings forward the key formula that turned BJP into the election winning machine and also recounts the contribution of Modi when he was a lesser-known personality.

The very first chapter of the book, The First Sightings of an Organizer talks about the biggest dam-burst tragedy in the history of Machchhu River (Gujarat) in which 25,000 people died.

“What appears to have stood out in the relief operation was the focused approach of a team of RSS volunteers led by a young pracharak (full-timer) known as Narendra Damodardas Modi,” reads the book which talks about the timely intervention of Modi in organizing the relief operations.

The author writes about the transitions from RSS to BJP and the growth of BJP in his book. In 2014, BJP not only won more seats than any other party over the past several years but in 2019, it also increased its score in the next general elections. The book talks about the PM’s traditional methods of party building and use of his innovative and unconventional methods to build the party.

Modi also brought the new work culture in place as author says in the book, “Modi believed that the officer bearers must not take their offices for granted and that each office should have fixed tasks.” Although the move didn’t go well with some of the seniors, a sense of accountability and responsibility emerged among the office bearers.

The book also highlights the innovations taken by the PM- the first time for a political party to deploy the ‘interventional methodology’ to expand its area of influence. The author said that Modi has time and again encouraged the cadres to connect to people and work on the grassroots by adopting the initiatives.

For elections, to emphasize the uniqueness of BJP in the political space, Modi made use of short and catchy slogans and broke the traditions of having long slogans.

“Because he looks at electoral demographics with a bold new standpoint and shakes up traditional structures and processes, Modi has made the BJP as a huge machine at granular levels,” mentioned the book.

The author talks about his first meeting with the PM in the 90s when Modi was BJP’s National General Secretary. In the same year, Modi became victorious in forming a BJP government in Gujarat for the first time under the leadership of Keshubhai Patel.

While analyzing years of Modi in Gujarat and 2014 political methods, Singh argues the victory that the party achieved under his leadership demands institution- creation ability. Modi kept refining his organizing skills during his period in Gujarat.

Covering 40 years of Modi’s political journey, Singh talks about the past and the future of the party based on the extensive interviews with workers, leaders and observers.