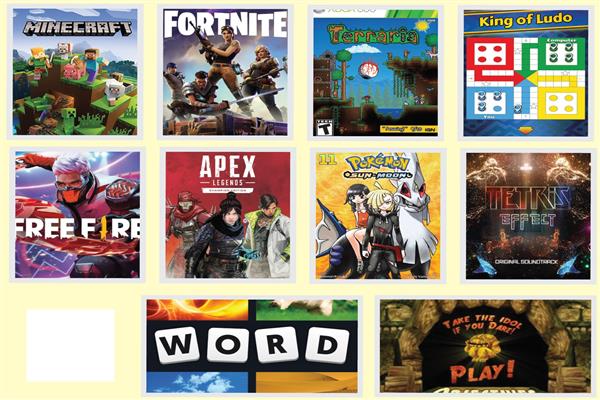 With the emergence of online education—which has become more prominent amid the Covid-19 pandemic—school-going children in most of the world, including here in Kashmir, have stayed home for the most part of the last two years. Staying home has meant that education also has to be imparted away from school with parents acting more or less as teachers. However, the downside to it has been on the children’s mental and social well-being, with several psychologists pointing out how difficult the past two years have been for children of all strata. In this environment, online games can provide much-needed succour to children who are missing school and all the excitement that school brings.

With this thought in mind, Rising Kashmir’s sub-editor Irfan Mehraj lists out some of the best online games that children in Kashmir can play to keep themselves entertained over long stretches of staying home.

Minecraft is a perfect video game for children. A very popular game that can be played both on a computer and a mobile phone—Minecraft is a game that comes with instructive tools. It’s a game for children as well as young adults, and in fact, teachers have also been found to be fond of the game—for the game’s unique ability to solve problems. This can be very good for the teachers. The game is developed by Swedish video game developer Mojang Studios. Released in 2011, Minecraft today is the best-selling video game of all time and has the highest number of active users ever for children’s games. What makes Minecraft so interesting and in fact also been regarded as the greatest video game of all time for children is how it is played—which is a world with infinite terrain and where players explore, discover and extract raw materials, build structures, machines and craft tools. The interesting thing about the game is that players can modify the game to create new mechanisms. The game is so popular that many schools around the world have adopted this game as a teaching tool. Every parent who is interested that his/her kids obtain important lessons should buy this game for their children.

Fortnite is an online video game released in 2017 by Epic Games. As soon as the game was released, it earned followers and is today one of the most popular online games for kids and young adults alike. The game is available in three different themes—Fortnite: Save the World, Fortnite Battle Royale, and Fortnite Creative. The Fortnite: Save the World is a game where players (unto four) fight off creatures, who are zombie-like and build traps and fortifications to defend themselves. In the Fortnite Battle Royale, players fight for survival. It’s free to play a game where up to 100 players fight to be the last survivor standing. The Fortnite Save the World is the third version where players are given complete freedom to create their own worlds and battle arenas. What is great about this game is that it is completely free to download and can be played on every major console and mobile device. Kids can play with their friends on other systems in the game as it supports cross-play which school kids can use for great benefit.

The third game on this list is Terraria - a blend of Super Mario Bros and Minecraft. It is an adventure-action sandbox game. It was released in 2011 by Re-Logic. The game was first released to Microsoft Windows but has since been ported to many other platforms. It’s a classic building game and is a favourite among kids. It features crafting, building, painting, exploration and even combat with several creatures. The game comes in 2D world and is widely popular. The game allows players to connect with seven other players to play online—involving great opportunities for fun and safe multiplayer action. Players have to navigate and fight monsters, and they are also given the ability to craft materials within the world.

Free Fire, also known as Garena Free Fire, is a blockbuster battle Royale game and kids all over the world are addicted to it. The game was developed by 111dots Studio and in 2019 was the most downloaded game across the world. In fact, the game was awarded the “Best Popular Vote Game” by the Google Play Store in 2019. It has some of the highest daily users across the world. It grossed over 1 billion dollars in 2019. A graphically enhanced version of Free Fire called Free Fire Max was released in September 2021. It’s an online-only game and consists of up to 50 players parachuting into an island. The players lookout for weapons and equipment to kill other players. The game is quite popular among kids above 12 all over the world.

Another very popular Battle Royale game, Apex Legends is a free-to-play shooter game. The game can be played on Microsoft Windows, Playstation, Xbox and is yet to be released for Android and IOS platforms. Teams of up to 3 compete in matches with up to 60 players to be the last team standing. The gameplay has a focus on teamwork and communication and is good for teaching team-sport. The game is free to play on the platforms mentioned above. The game is very popular with pre-teen gamers. Wait out for its Android and IOS version which is going to be released in March 2022.

6. Pokemon Sun and the Moon

When it comes to role play games, Pokemon Sun and the Moon is up there on the list. There are two games in the series: The Pokemon Sun and the Pokemon Moon. The games were released in 2016. The game is very good for kids above 12 or even below as it has adventure elements in it with a fictional storyline. The game is based on the Alola region and is played in a third-person and overhead perspective. The player in the game is controlling a young trainer who is going on a quest to catch and train other creatures known as Pokemon. The player's job is to win battles against other trainers. The Pokemon video game series are considered very safe for children to play online.

As kids we all loved Tetris. Here comes its online version which is not only better than the traditional Tetris game played on a video console but is winning admiration for its graphics. The game was initially released for PlayStation in 2018 and the version for Microsoft Windows was released in 2019. The game is developed by Japanese studios Monstars and Resonair and published by Enhance Games. The game is a tile-matching video game that has garnered positive praise from critics from around the world. Upon its release, the game was named Game of the Year by several publications.

4 Pics 1 Word is a game that is not only very easy to play for kids but can improve the user's vocabulary. It's a word puzzle game created by LOTUM GmbH and is available for free on Android and iOS. The gameplay is very simple. Each level of the game displays four pictures linked by just one word and the players have to work out and find out what the word is. The players have to do this from a set of letters given below the pictures. Kids above 10 can easily play this game and improve their vocabulary. The game has received mostly positive reviews.

The game is the online revival of the classic Ludo board game and ever since its release in 2016 has been a mega-hit among kids and adults alike. It is a free to play mobile application game developed by Indian studio Gametion Technologies Pvt Ltd. The game is available on Android, iOS, Microsoft Windows, and even Kindle. The game is ranked as one the top played games on the internet and can have multiple players playing the game. Ever since its release, the game has been consistently ranked No. 1 in the Top Free Games Section of both the Apple App Store and the Google Play Store. The game is a digital version of the Ludo board game that is not only fun to play but can teach patience to kids on how to persist and win.

Released in 2011, Temple Run is one of the most popular mobile application games ever. Known as an endless running game, the game was developed by Imangi Studios. The game involves a single player who is running and is chased by an enemy and he/she has to avoid falling or bumping. The theme of the game is exploration. It varies between different spin-offs. The game is a commercially hit venture and has seen downloads above 1 million. It's a fun, easy to play game for children. The game can be played offline as well.