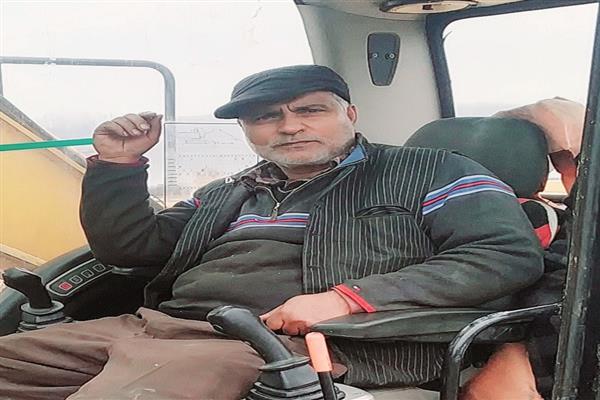 Mushtaq Ahmad Bohru would never be at peace with himself until he finds the solution to the problem that is bothering him. This lead him to make the number of innovations.

Hailing from Azad Gunj area in north Kashmir’s Baramulla district, Mushtaq acquired the technical knowhow from his father who had learnt basic machinery skills from two engineers who had come to Kashmir for dredging of the rivers in the past.

“I don’t remember the place where from the foreigner engineer was and the other engineer was from Punjab.  My father had learnt repairing and machinery skills from them and possessed the skills that no one had at that time,” said Mushtaq.

Mushtaq’s father being a mechanic used to modify the machines when the word ‘innovation’ was not even known to himself.

In 1953, his father started his own workshop under the name of Bohru Mechanical Workshop. He said that the workshop is not the place of grease and spare parts only but the wonders have been happening there. Mushtaq claims that it is the first and oldest workshop of the Baramulla and the place which has made Mushtaq an innovator today.

“I had grown up watching my father fiddling with machines and it gradually developed my love for the machines. I would spend most of the time there and learn whatever I was meant to learn from him and then experience and curiosity taught me the rest of the things,” he said.

It is pertinent to mention here that Non Return Valve is a device used to allow the water to flow through it in one direction. It is fitted with the pipes so ensure the smooth flow of high pressured water where pressure conditions can sometimes cause reverse flow.

Talking about his Non Return Valve which is one of his successful innovations, he said the valves used earlier by the government department would not hold the pressure of the water and would break easily. Also the valves were expensive as they were imported from other places.

Once the department approached him to repair the valve. While working, he got the idea of making his own Non Return Valve which is durable and also costs less than the earlier used valves. Currently valves developed by him are installed at almost 150 sites by the concerned department.

Mushtaq’s another innovation, Multipurpose Mechanical Grinder is of great importance to the people. The traditional Grinders used to work on the water pressure when there was absence of electricity.

He said, “As electricity is available everywhere now. I made a motor with which the grinder works and be it flour, grain or pulses we can grind easily using this machine. It involves less work and the production is also high.”

He believes that innovations should ease the work of humans and also should be inexpensive. “It’s not affordable, if it’s not innovative. The cost of multiple machines used for performing multiple tasks will be obviously greater than a single machine which can do all the tasks. I believe one machine should be used for multiple purposes and I am working on many such projects,” he said.

With the same concept, he has made another all-in-one machine for cutting fiber, glass, iron and wood. The machine is portable and also affordable.

Another novel concept is the Mobile Pump Station for Water Lifting. For irrigation purposes mostly in rural areas, on the banks of river Jhelum, small water pumps are installed. These water pump stations are built at a particular place and cannot be moved.

“When the water level in Jhelum recedes, it becomes very difficult to lift the water. I made a shed consisting of a water pump,  which can be submerged in water or moved to another place and also can be taken out when the water level becomes normal,” he said.

As the water recedes, the mobile water pump goes down on its own and automatically helps in the lifting of water for irrigation purposes.

50 years old, Mushtaq said that there are many things that he wants to do but lack of material is the obstacle.

“All the material that I used to make innovations is not available in the market. Most of the time, I have to travel outside Kashmir to get the material. There is nothing that innovators of Kashmir cannot do but the unavailability of material makes us handicapped. If proper facilities are provided, we can also compete and do better than the rest of the innovators,” he said.