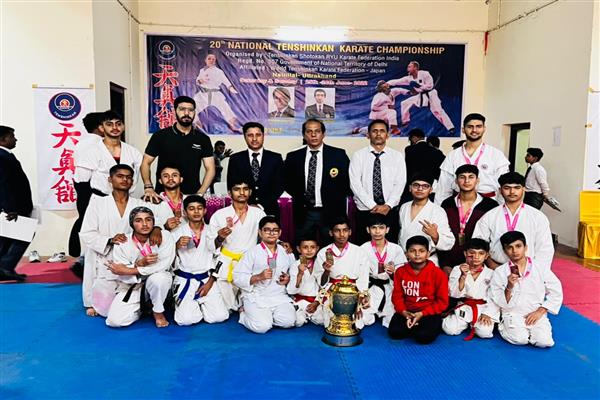 In a statement issued here, the team bagged 18 medals during the event which included six gold, three silver, and nine bronze medals.

The championship was organised by Tenshinkan Shotokan-Ryu Karate Federation of India approved by Karate  Association of India (KAI).

The event was participated by the Sub Junior, Junior, Cadet, Seniors (Boys and Girls) players from across the Country, representing their respective States. The J&K Tenshinkan karate Do team was led by Sensei Gopal Dass (Team Coach), and Rishab  Arjuna Team, Manager.

The ceremony of awarding medal and Certificates to the players was held by Tenshinkan Shotokan-Ryu Karate Federation of India.

While addressing the ceremony, Sukhbir Singh, General Secretary, said J&K Tenshinkan Karate Do Team has displayed marvelous performance. He further said these players have the talent to win medals at the National and International levels.

Chief Technical Director, Brijesh Bhau, in his address, also appreciated the JK player for winning the medals for U.T J&K.

“It is a proud moment for us.”

He also called upon & asked the youth to take up sports to lead a healthy and disciplined life.