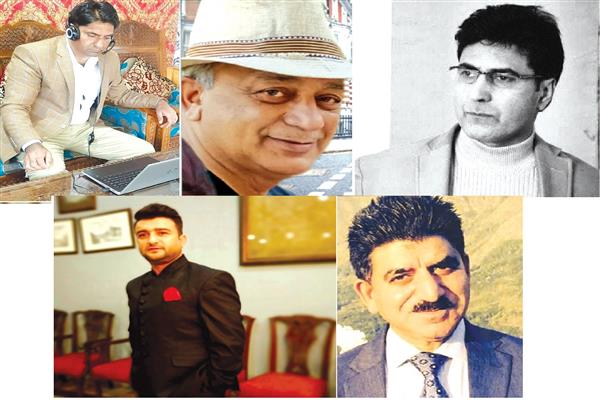 In Kashmir valley, subject-specific teachers have achieved milestones by winning the hearts of lakhs of students by contributing the words of knowledge and wisdom and shaping the young impressionable minds.

They not only educate the youth but subsequently play a pivotal role in the societies to make its people competent enough to compete in all otheraspects.

Rising Kashmir’s Education Correspondent, Riyaz Bhat find some of the teachers who have been famous for their name and have been providing quality education to the students for decades.

For Yatoo alias Farooq sir, compassion was the main motive behind teaching the chemistry subject for the senior school students.

“I never saw the students as a source forminting money; rather, I was compassionate enough to teach them for my satisfaction,” he said.

Farooq says that he has not only taught the students who could afford to pay the tuition fee but also those who were keen to learn and were from underprivileged families.

Hailing from HayatporaChadoora in central Kashmir’s Budgam district, Farooq after completing his masters’ degree in 1997, he started teaching students Chemistry in Chadoora only in 1998.

“Then in 2005, I started tutoring the students in Baghat area of Srinagar. After that, I started teaching chemistry in Parraypora in 2009,” he said.

Farooq says that he was mainly focused on individual teaching at the private coaching institute.

Farooq however said that the Whips could survive for only a year for many reasons. “Then we formed another coaching institute as National Institute of Education and Training (NIET). The coaching institute was run by the unemployed youth.”

In 2016, he again started another educational venture Veve wherein he used to teach chemistry subjects to 11th and 12th standard students.

“Many of many students he taught are now settled and accommodated in the reputed educational institutes wherein they pursue the professional courses,” Farooq said.

Posted at Government Higher Secondary B K Pora as a lecturer, Farooq says that he had taught chemistry to tens of thousands of students.

He says that in 2018-19, he quit teaching at private coaching institutes because of several domestic problems.

Despite suffering a brain haemorrhage some twenty years back, Ghulam Hassan Lone popularly known as Lone Sir did not backoff in teaching the art students.

The 70 years lone says that he has pursued a master's in Political Science and Sociology.

“Forthe past 20 years, brain haemorrhage has left me handicapped. But I never stop teaching my students,” he said.

Lone has been teaching the main subjects of the Arts stream in the Wazirbagh area of Srinagar. The main subjects include Political Science, Sociology, Education and Urdu to the secondary and senior secondary students.

Having teaching experience of over 50 years, Lone says that he has been teaching these subjects since 1973.

For Lone Sir, teaching is not just a profession but emotion and affection towards the students as well.

“In my fifty years of experience, I have seen many ups and downs but I never see my students as a tool of making money, and I think that is one of the main reasons for the continuity of providing lectures to them,” he said.

Lone has so far taught more than one lakh students. “As an Assistant Professor, I used to teach B.ed and M.ed, but I quit it in a very short period.”

Hailing from the PalhalanPattan area of north Kashmir’s Baramulla district, Tantray says that he had completed his matriculation from Palhalan government school.

“Initially I was not a bright student in my childhood even I had no interest in studies. However, after I entered into the bachelors wherein I was pursuing science, my interest towards studies gradually increased and I started studying hard,” he said.

Tantray completed his master's in physics in 1987. “I was the topper of my class.”

“During that time, Like others, I also completed my masters but the extraordinary thing I did was that I joined PhD among all my mates. My co-guide was professor Hashmi from SSM College of Engineering,” he said.

He said that he was attached with professor Hashmi for ten years and during that time he learnt a lot of things about physics besides the regular stuff.

“Later after completing my PhD, I was appointed as an assistant professor at the young age of 24 in the department of physics,” he said.

Tantray says that physics subjects fascinate him. “I started teaching physics in 2000-01 and I got very popular among the students at that time. Students used to come around me to learn more about physics to compete at the national level exams in physics.”

“They were coming to me in a large number. Initially, I have taught thousands of students and most of them are doctors, engineers,” he said.

He says that he is mainly focused on teaching the foundation course of physics to the students who want to crack or qualify for the national level exams. “I train them for a year.”

Mir Bashir Ahmad popularly known as Bashir Chemistry has gained fame among the thousands of secondary and senior secondary students who he had taught for two crucial years.

Ahmad says that the majority of his students have excelled in the field of science.

“I can’t remember exactly as to how many students I have taught, but one is thing is for sure that the number would be in the thousands and I can proudly say that most of my students have excelled in the field of science,” he said.

Ahmad further said that he has been teaching chemistry since the 1990s and in 1991-1992, he started the Elden Bleze coaching institute at Karan Nagar Srinagar.

“It was exactly that time when some of the Kashmiri Pandits migrated to the Jammu region,” he said.

On asking as to why he stopped teaching the students at his private coaching institute, Ahmad said that following the outbreak of Covid-19 in 2019, he stopped the practice. “We will resume the teaching process in a short time.”

Ahmad is currently posted at SP College and has taught the same subject in various government Higher Secondaries.

Likewise, the famous Muneer Aalam alias Muneer Sir has been famous for many innovations but the open-air classes and expertise in teaching Mathematics has made him a brand name around the downtown area of Srinagar.

Hailing from the MahrajGunj area of Srinagar, 41-year-old Muneer is a teacher of Mathematics and other entrance subjects in Gaash coaching institute at ZainaKadal.

Besides teaching Maths, Muneer got famous for his innovation of open-air classes which he started during the first wave of COVID-19.

“After I started teaching my students in the open air during the first wave of COVID-19, I was awarded and appreciated by the number of persons and national level organizations,” he said.

Muneer has been teaching Maths since 1995 and has a teaching experience of 27 years.

He says that has taught Maths to more than 25 thousand students among which were selected for NIT while some topped the civil engineering exams.

“In the previous batch of KAS, 17 students who got selected for it were taught by me,” he said.

Mahajan was only 21-years-old when he started teaching students commerce subjects.

64-year-old, Mahajan says that he has been associated with education for the last 40 years.

The resident of the Nowhatta area of Srinagar, Mahajan has perused his master's and PhD in commerce subject from Aligarh Muslim University (AMU).

“After completing my masters, I initially got the job in Jammu and Kashmir Public Service Commission but I didn’t join and prefer to join academics. I joined Islamia College of Science and Commerce,” Mahajan said.

He says that when he joined the College in 1980 as a lecturer, Islamia College was the only higher education institute in Kashmir wherein commerce subjects were being taught. “In Islamia College, I used to teach 200 students in one academic year.”

Mahajan has not taught students in college only. Besides, he has provided education to thousands of students individually at his home and private coaching centre.

“After working hours, I was providing coaching to students at my home initially but after sometime, I started teaching them in a private coaching institute,” he said.

Mahajan says that he has taught every third person working in most of the corporate sector of the Kashmir division.

“Most of my students have been working as head of the departments in educational institutes, charted accountants and banks,” he said.

For the past three years, Mahajan has now quit teaching the students. “My coaching institution has been closed forthe past three and a half years.”

“I have been teaching students forthe past 30 years and I was just 17 years old when I started it,” he said.

He said that he has taught countless students. “I have always chosen to teach the brilliant students.”

53-year-old Chashoo says that almost in every session, he was teaching chemistry to 1500-1600 students.