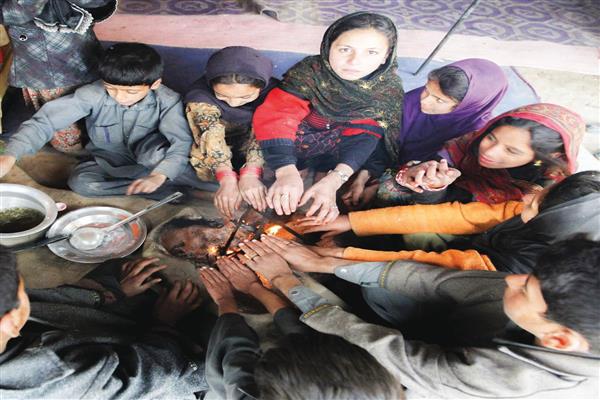 Sitting with her Hookah, wearing Pheran – a traditional knee-length cloak, along with Kangri, 70-year-old Zaina Begum from Baramulla’s HyderbeighPattan area said they used to celebrate the Chillai Kalan and due to heavy snowfall people would usually prefer to stay inside their homes.

The 40-day harsh spell of winter, locally known as Chillai Kalan started last week. In villages, people would mostly remain busy with preparing Wagoo (local reed mat) or making Patig (mat made from paddy grass). People would enjoy and share the joy of the season.

“We would mostly eat dried vegetables the whole winter,” she said.

From spring to autumn people in Kashmir, especially women dry different kinds of vegetables for winter. The dried vegetables are unique in taste and are used during winter months. For many people, it is a source of livelihood.

Recalling her childhood, Zaina said she along with her friends would often go out for snow skiing on nearby high slopes by using polythene or fertilizer bags.

“Children would play Sheen-Jung (snow fights) and Sheshergant (icicles) were used as swords in this traditional game,” she said.

Zaina said if there was any function in the village during Chillai Kalan, it was celebrated more than anything.

She said rich people in villages would often invite Kitabkhans (story tellers) during snowy nights who used to mesmerize people with folk tales and “it was the tradition that is nowhere these days.”

“Mothers would often narrate imaginary characters in Kashmiri folk tales of ‘Chil-Bab’ to their children at night. Where they would often call, ‘Chillai Kalan' as father of the harsh winter and ‘Chil-Bacha’ as part of winter family. It was also used as a fear tool to stop children from going out during winter months,” she said.

Zaina said during Chillai Kalan, it was common practice in villages that they would insist children eat potatoes that were roasted in Kangri or Daan (Earthen Chulha) to remain warm.

“We used to roast potatoes in Kangri for the children as it had high nutritious value. I think every youth who are in their 30s or 40s would have experienced it,” she said.

Similarly, Abdul GaniBatoo from TrahpooAchabal area of South Kashmir’s Anantnag district said there used to be heavy snowfall during the Chillai Kalan period.

Batoo, 70, said they used to sit inside their house for many days as it was a difficult time with no electricity for the whole season. “We used to burn kerosene oil or mustard oil for light,” he said.

“We used to gather children after dinner in a room and narrate stories of culture, religion, and society. Most of them were imaginary stories which we remember even today,” he said.

Abdul Majeed Rather, a 60-year-old from HMT Srinagar said with the onset of winter in Kashmir, people used to gear up with Chillai-Kalan preparations.

Explaining various aspects of Chillai Kalan, he said with its onset, people used to prepare and purchase Kangris, blankets, and heavy woolen cloths.

“Chillai-Kalan wasn’t only a name but something which is much talked about across the valley. It represents the winter family. The harsh winter period starts from 21 December each year and lasts for 40 days,” he said.

He said in villages, people were rearing sheep, weaving carpets, preparing mats, and doing other works in this season.

Rather said he along with his friends would often visit Dal Lake, which would freeze to an extent that people would enjoy playing traditional games on it.

“Even some of my crazy friends would play cricket there. We would return home by foot,” he said.

He recalls that during Chillai Kalan, in Maisuma, and other parts of Downtown, people would enjoy delicious Harissa to keep themselves warm which still continues today.

“Usually, people enjoy the season. Even at homes, special arrangements were made; grains, pulses and animal hooves were prepared for dinner to remain warm and healthy,” he said.

Rather said elders would often narrate the stories to children for their entertainment to keep them busy not to venture out in harsh winters.

“Kehwa was the special drink used during the Chillai Kalan period. It was served thrice a day. The trend still continues,” he said.

For ecologists and environmental scientists, Chillai Kalan is a welcome period since snowfall during this period replenishes perennial water reservoirs in the Valley and Ladakh.

“By the end of February, winter in Kashmir wraps itself up for the year, paving the way for spring. Chillai Kaatna is a ritual wherein a person completely isolates himself or herself from the outside world to concentrate on his or her spiritual or professional pursuit,” he said.

Khalid said Kashmiris would virtually shut themselves in their homes during harsh winters.

According to the old Kashmiri calendar, the Great Winter begins on 6 or 7 Poh which corresponds to 21 or 22 December. The 12 months of the Kashmiri calendar include Tsithur, Vahekh, Zeth, Har, Shravun, Badrupeth, Ashid, Kartikh, Monjhor, Poh, Maag, and Phagun.

He said historically, the harsh period of Kashmir winter was known as Shishur. Old Kashmiris divided the year in six seasons, each lasting for two months, including sonth (spring) from 15 March to 15 May, greshim (summer) from 15 May to 15 July, wehra’t (hottest period) from 15 July to 15 September, harud (autumn) from 15 September to 15 November, wande (winter) from 15 November to 15 January and sishur (coldest period) from 15 January to 15 March.

“People in Kashmir prepare themselves in advance for winters, especially Chillai Kalan. Provision for woolens, especially Pheran, charcoal for Kangri and wood for Hamam are made before its arrival. Sufficient stock of food was also ensured well in time,” he said.

Khalid, who is also a poet and former Kashmir Administrative Services (KAS) officer, said in the bygone years, Kashmir would often remain cut off for months from the rest of the world due to heavy snowfall, and stocked dry vegetables were preferred.

Over a period of time, these dry vegetables became delicacies and are still cherished by Kashmiris and they have a taste for traditional cuisine.

“For locals, Chillai Kalan is the time for leisure, enjoyment, and party. They celebrate it with relishing harissa followed by a cup of nun chai (salty beverage),” he said.

Khalid said Harissa vendors in the old city of Srinagar are thronged by people during early morning. Many enthusiasts eat delicacies there while very few take it home for family.

He said until recently, when digital medium entertainment such as cartoons, rhymes and video games were unknown, snowfall was the time for great enjoyment for children.

“The joy of walking over fresh snow, leaving footmarks, and enjoying the crispy sound it generated was unmatched. Children would literally go mad playing with snow, fighting by throwing snowballs at each other and making snowmen was altogether different,” he said.

Khalid, an author of many books, said children used to eagerly look forward to the arrival of 'Chillai Kalan' as it meant a lot of snow and a long recess from school. Educational institutions would break for winter vacations around Christmas and reopen in the first week of March.

The noted historian said woolens were a luxury, not everyone afforded. Garments, especially pheran, were made of cotton fabric known as shaitanter and falalein (flannel).

“A wooden sandal known as khraav was common footwear even in the city. In villages, typical footwear known as pulhor, made of paddy straw, saved people from slipping, falling over frozen snow,” he said.

The ankle-high Duckback, much sought after rubber shoes, came later. Breaking icicles hanging from rooftops, and licking them as if it were ice cream, was another proclivity of children.

Khalid said during long winter nights, listening to stories of heroes from local folklore narrated by elder family members was a common pastime of children.

“Adult members of the family would also join these tempting sittings. Professional storytellers literally held village folk captive to their narration of daastan (folklore),” he said.

He said under the dim light of an oil lamp in a room filled with keen listeners and the storyteller weaving magic through his narration created an absorbing atmosphere.

During the 1950s-60s, Khalid said, Srinagar city would receive 3 to 4 feet of snow. Elders then talked about their youth when snowfall as high as a storey in the countryside was not uncommon.

He said due to rigorous and ravages of snow, a Kashmiri who otherwise loves and celebrates a snowfall, eagerly looks forward to return of the spring and sings optimistically: Wandetchali sheen galibeyiyiyibahaar (winter will pass, snow will melt; the spring will return).

Khalid is also author of exposing the Myth Behind the Narrative, Kashmir: A Walk-Through History, and Kashmir: Looking Back in Time — Politics, Culture, History.

He served the State Administration as Director General Information and Public Relations and Secretary, J&K Academy of Art, Culture and Languages, besides serving the department of Libraries and Research, and Archives, Archaeology, and Museums.

His book Jhelum: The River Through My Backyard has added the Jhelum Factor to the history of Kashmir. His two works in Urdu poetry and prose have won the highest State literary award in 1984 and 2010.