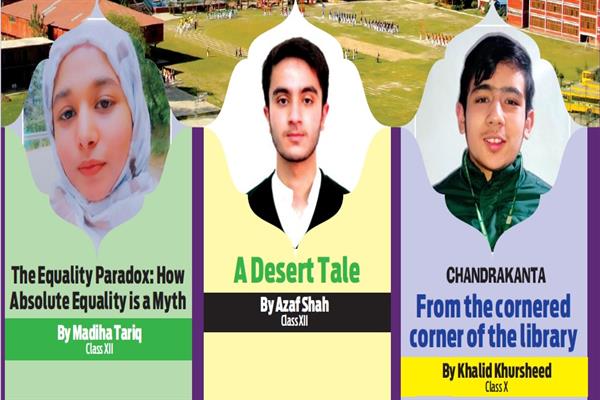 The Equality Paradox: How Absolute Equality is a Myth

To begin with, it is imperative to state that the motivation behind this article lies in the essence of inquisition. Our perceptions and definitions of numerous socio-political ideals have perpetually been changing since the Age of Revolution that spread its wings in Europe from the late-18th to the mid-19th centuries, inspired by the novel intellectual and philosophical ideas of Enlightenment. One such trend of contemplation that has set all the global institutions of research on fire is the notion of Equality. The quintessence of this essentially contested concept rests not only in its rhetorical supremacy, prescriptive context, or for that matter, in its political and moral denotation but equally in the dispute concerning its precise understanding. This controversy is further fuelled by the obvious relationship that exists between equality and its sister ideals of Justice and Freedom.

To put it in simpler words, Equality is anything but absolute. The continuous unfolding of multiple divergent streams of thoughts deliberating on the concept of equality has led us into assessments with indefinite, open-ended questions – Is equality fundamental or contingent? Is equality an input to be given or output to be judged? Is equality measured by the equality of resources or the equality of welfare?  Does equality stand on the principle of justice or vice versa? Is differential treatment a violation of equality? It is only when we decode these questions and see things objectively for what they are that we will be able to formulate a comprehensive hypothesis and appropriate policies for public administration. However, the supposition that philosophy without subjectivity is as functional as computation without numerals is still a potential threat to the very purpose of this delineation.

About the first question, it occurs to me that equality is neither fundamental nor contingent, but, contingently fundamental i.e., it is fundamental and has its independent, intrinsic value only when it is seen through the lens of morality and the presumption that all human beings trace their feet back to a shared notion of humanity; those humans are equal simply because they are all humans. To speak of the wider picture, humanity unites people and yet divides them surrendering to the fact that no two people are alike – neither genetically, nor psychologically. We can conclude, therefore, that formal equality is perhaps not the best kind of equality that one can establish in society. Furthermore, one can also propose that equality may not be an end goal in itself contrary to what history has taught us, time and again. This essentially suggests that equality should be seen as a roadway to facilitate the pursuit of other socially desirable outputs and that the success of egalitarianism in a society can be measured for the realization of socio-economic and political prosperity and not by accessing the face value of apparent equality.

Briefly paraphrasing, it may be inferred that perfect/numerical equality is in its spirit, a manifestation of inequality and that imperfect/ proportional equality is substantially the perfect example of equality that we can look up to, both as individuals and as a society.

As Gilles Deleuze had said, “Paradox is the pathos or the passion of philosophy”.

From the heart of the desert, comes a voice that enthrals the beings all through the great lands. No one understands the language of the entity far away from us; it’s regarded as a guide for the lost and a tormentor for the depraved. What is this sound? Who is this?

For the ones familiar with the myths that abound in the Arabian Peninsula, the myth of the desert voice is something that most aren’t familiar with. A tale that passes through the generations among the Bedouins. They regard this voice as the soul of the desert. Famous travellers from Europe when venturing on their adventures and scholars during their explorations usually narrate strange sounds that misguided or guided them during their journey. In mystical terms the Bedouins connect themselves with these voices through meditations under the purple night sky, latching on to the soul of their land, the soul of existence. It is believed that world leaders on their visits to Arab countries, spend time with these wandering tribes to gain great fortune and authority. And it's reported that in return for this bounty they leave a part of their soul and their sanity with the desert voice, which is returned to them as mortal sickness or sin.

While all of this might seem to be a fabricated tale to just enamour the readers, those who are of this frame of understanding should realize that they are right. Completely correct. This story is false to the degree that I had to even search the spelling of the word ‘Bedouin’.

So, what is the purpose of it?

Well, to put it into simple words, the world around us, from the societies we live in, to the digital spaces we scroll through, is filled with disinformation and conspiracies. These so-called truths are mostly just half-baked thoughts that are put forth as God’s truth. And people, including myself on occasion, believe such things and then spread falsehoods further.

It is a process such that, after a while, as it spreads to more and more people, it is eventually acknowledged as the truth and becomes part of the social discourse. In some cases, these stories are just fictitious tales spun by some creative writing, but many times it’s been discovered that such conspiracies and falsehoods, like the ones surrounding COVID-19 vaccinations, the financial markets, and social and racial issues, are systematically created. This is done by organizations that are hired by individuals and entities that wish to create instability, for example, in a certain sector of the economy – renewable energy. Or to go back in history, an example would be the work done by Goebbels to ensure the acceptance and spread of the Nazi ideology.

The little story I just concocted is quite innocent, but most of this industry of disinformation is pure propaganda, the outcome of which is monetary or political gain. All of this takes place at the expense of a certain community of people or scientific realities. An example in this regard is climate change. Certain interested groups worked relentlessly over at least half a century to convince people that this phenomenon was nonsense and that we shouldn’t be worried. While now the truth of the climate emergency has gained acceptance, what is now projected is that the developing world is responsible for it. This obfuscates the truth of ‘Carbon Colonialism’ and the increasing industrial emissions of the developed countries.

These were just some instances of how reality is moulded to suit the desires of those in power. So, it is necessary for all of us to engage in the responsible acquisition of information and not blindly trust articles or videos. We must cross-check the news we obtain through multiple and varied authentic sources. Our understanding should be rational and logical, based on a perspective that is open to differing viewpoints. It is only then that we can engage in reasonable accrual of information and try to work towards a better understanding of the world around us.

There is a wise saying, “Never judge a book by its cover" and there are unwise people like me who tend to pay a blind eye to this saying…I was in the Hindi corner of the library, a corner which has been cornered by the students. In the pretty black and white colours of the book covers, one with a purple and pink hue shined, immediately catching my attention. On the covers was probably a madame with her apprentice and on the title, I, with my 5th-grade knowledge of Hindi managed to read “Kothe Pe Kaaga”. This book became an object of laughter and fun for me and my friends. The urge to know more about this quite unusual book cascaded into us opening the book and glancing at the author. One of my friends read “Chandrakuta”. The other corrected him and said CHANDRAKANTA. My eyes fell on the familiar word Srinagar and I knew what my next article would be.

Chandrakanta was born in Srinagar on 3 September 1938 to Professor Ramchandra Pandit. Since her childhood, she chronicled injustices and rebelled against being condemned to the Chula. Her entire childhood was spent in camaraderie with the books in her father's library. Early in her childhood, her mother was diagnosed with Tuberculosis and unfortunately, at that time, there was practically no treatment for TB. Initially, to treat the symptoms of the disease, her mother was taken to the refuge of the mountains with her and her siblings as abettors. The serene mountains with their pristine scenery left an everlasting impression on her. Chandrakanta's mother reached her final destination when Chandrakanta was eight years old.

She got her initial education in Srinagar; this was coupled up with learning how to play the sitar. She pursued an M.A in Hindi literature from Birla Arts College, Rajasthan. She started her literary career in 1967 and 1975, she shifted to Hyderabad. Her stories are set in the idyllic beauty of Kashmir, fanning information about the synergetic and inclusive Kashmiri culture. In her writing, she calls on people to forget their differences and cherish what is common - our humanity and pledge to common brethren.

Apart from the purple and pink Kothe Pe Kaaga, her works include SalakhonKePeeche, Galat Logon Ke Beech, Poshnool Ki Vapasi, AilanGaliZinda Hai, Dahleez Per Niyay, ApneApne Konark, O Sonkisri, Suraj UgneTak, Kali Baraf, Katha Nagar, Arthantar, Katha Satisar, and AntimSakshya. Her magnum opus is Katha Satisar [2001]. She has been the recipient of several awards, including the Subramanyam Bharati Award, awarded by the President of India for her literary work. She has won the prestigious Jammu Kashmir Cultural Academy Best Book Award four times. Her works have also been translated into many Indian languages, and English. Many of her works such as AntimSakshya, Nowsheen Mubarak, and Poshnool ki Vapsi have made it to the camera. Currently, she lives in Gurgaon with her Kashmiri eyes noticing every problem in the society, Kashmiri legs standing up to these problems, and Kashmiri pen recording and rectifying these problems.

Please feel free to drop your feedback/suggestions at lit@dpssrinagar.com