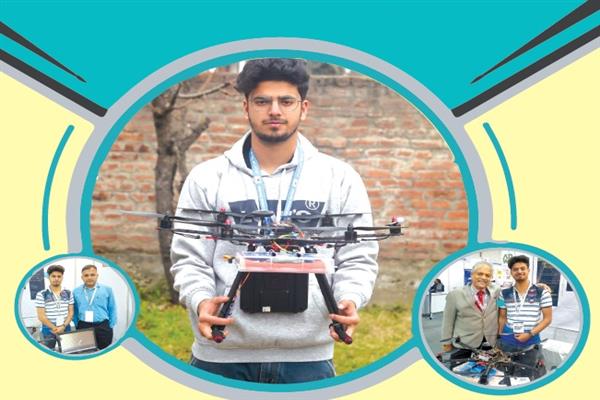 Abban Habib, a class 12th student from the Zakura area of Srinagar, has come up with a startup ‘Sky Robo Drones Company PVT LTD.’ He has built a drone that can offer relief to people during a disaster. The drone can track the location of the people and can video-graph the situation in which people are stuck so that the rescue squad can react accordingly based on the data that the drone reports. It can also bring in disaster relief material including life necessities like food, first aid, and life-saving tools within 5-10 minutes which can eventually save time and life of the stuck people.

Eighteen-year-old Abban has been a technology enthusiast since he was in class 8th. He completed his high school at Green Valley School Buchpora and is currently enrolled in Government Higher Secondary School NigeenHazratBal. At this age, he has developed a flying machine that can monitor the situation of the disaster-hit zones from the sky and can produce a map to assess the damages. “We can go live on YouTube while the drone records the disaster-hit areas so that everyone around the world can see that and the Global disaster experts who are not present with us can advise us how to deal with such a situation,” said Abban. He further said that it can be a good source of news coverage as well.

In 2014, when the Srinagar city was struck in massive floods, he saw the people in Kashmir helpless which inspired him to build a drone. He wanted to help those who were stuck or who required any medical assistance. “When the floods hit Kashmir, I saw many people suffer, some people were cut off from critical supplies like food while some were displaced from their homes as disaster management team could not reach them on time so I decided to create something beneficial that can keep people going during such crises,” said Habib. “During the natural disasters like floods and earthquakes only conventional methods are being used to save people which is not sufficient and the use of drone is more effective in such scenarios, he added.

Currently, his startup is being incubated at NIT Srinagar and Jammu and Kashmir Entrepreneurship Development Institute (JKEDI). In December 2021, he tested his drone during the mock practices conducted by State Disaster Response Force (SDRF) and the National Disaster Response Force (NDRF) at Nigeen Club Srinagar. In January 2022, his drone was exhibited at a defence exhibition in Ahmedabad Design Week (ADW) organised by a university in Ahmedabad Gujarat. His contribution is also recognised by Defence Research Development Organisation (DRDO) and India’s first startup tech conclave’22 held by AICRA in New Delhi.

Abban has developed a website that enables users to connect to their drones and manage them. The drones are connected to the cloud and can be controlled from any location in the world with sufficient internet connectivity. It has a panic button that people can press during any disaster so that the drone can automatically dispatch to scan the victim and deliver the supplies. He is planning to develop a mobile application for this now. Abban is a self-taught programmer, he has learnt to program by surfing the internet. “I had always a keen interest in coding, I used to watch videos online and I still watch videos online which helps me in learning different things every day. It also helps me to stay updated with the recent technologies. I have learnt to program, set up and assemble the drone from the internet only” he said. “I have tested my programme to run it, and I have been conducting experiments to boost it now," he added.

Apart from helping people in Natural disasters, Abban is also planning to install a mechanism in the drone which can help to combat man-animal conflict. The drone can automatically detect the wild animals present in the residential areas and can process the image to track and tranquillise them. “It will not only help save lives, particularly in the areas of regular animal-human conflict but it will also assist the wildlife officials in tracking and surveillance,” he said adding that “Currently we are conducting the trials for this at Dachigam National Park, but it's on prototype stage and has not been completed yet,” He also said that the drone industry is a niche industry and the market is cutthroat, in order to stay relevant a company needs to continuously evolve and innovate.

In the Ahmedabad Design exhibition, Abban was offered by various incubators for the incubation but he wants to work for Kashmir. “I didn’t accept the offer there because for now, I want to work for the betterment of Kashmir, I want to help my people and I wish to see technological developments in Kashmir and Kashmiri youth as the front runners in the world of technological innovations.

For Abban, the drone is the most exciting and adventurous thing. He said that with just a few components and easy formation, it works miracles. “Just a combination of a few tools, speed controllers, a processor, etc it can do wonders” He also said that drones have become a game-changing technology for emergency response and he wants to promote how well drones can be used for various activities showing people the effective aspect of the machine. He said,  “In future, I want to turn this into a business model so that I can earn and help people simultaneously”

Abban said that his father is his biggest inspiration. His father has appreciated and encouraged him at every step in this journey which has always motivated him to perform different experiments with the gadgets. “My father has helped me a lot in building the drone, whatever I am today I am because of my father and I feel fortunate of been raised by the most supportive parents. I belong to a family where all efforts are appreciated, whether successful or not. I have the best-supporting parents one could ever have!", he said.