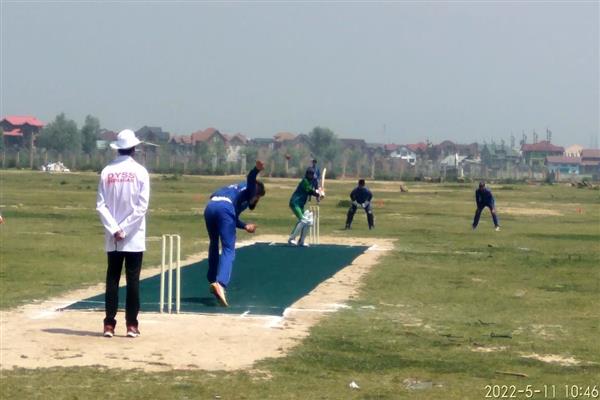 As per the officials,  the first scheduled match for the day was played at Kashmir University ground. The match was won by the district team of Srinagar.

While winning the toss team Srinagar  elected to field. While batting first District Kistwar team made 163 runs for the loss of 9 wickets in their allotted 20 overs quota.

For Kishtwar, Rubnawaz scored 65 runs in just 35 balls while as Shahbaz Ahmad scored 34 runs from 34 balls.

While chasing the target team Srinagar  responded strongly with their impressive batting order. Srinagar achieved the target in just 16.2 overs while losing its 5 wickets. From Srinagar Showkat and Aqib scored 54 and 22 runs respectively.

Likewise, in another match played today between Baramulla and Rajori at SP College Ground, team Baramulla while batting first scored a huge total of 196 runs for the loss of 6 wickets in allotted 20 overs.

Nazir smashed splendid 46 while as Mushtaq added meaningful 36 runs to the scoreboard. Rojori was bundled for 98 runs in just 18 over of the second innings. Muzaffar and Saleem from Baramulla took 3 wickets each.

In the meantime, the match played between Bandipora and Poonch at Eidgah playfield the scheduled first match for the day was won by Bandipora by 8 wickets; Poonch could merely score 79 runs in 17 overs.

In another match, after winning the toss, the district team of Shopian elected to bat but could score just 96 and were bundled. Basit from Shopian though made a brilliant half century but could not save his team from the defeat as Anantnag’s Zahid took 5 wickets. Anantnag easily chased the target with 4 wickets victory.

In another interesting match of the tournament played at Amar Singh College Ground, Ganderbal outshined Sambha  with the margin of 70 runs as team Sambha collapsed on just 100 runs while chasing 170 runs.

In one more match played at the same venue Kupwara scored 162 runs for 9 wickets while following a target of 174 from the opponent Reasi team.Reasi won the match by 11 runs.

Third match scheduled at the venue was won by Kulgam. Kulgam after winning the toss elected to bat first. Kulgam scored 130 runs for  the loss of 9 wickets in 16 overs.

Ashiq Hussain from this team scored 38 runs and took 5 wickets in return Pulwama could only score 74 runs on the loss of 9 wickets in the allotted 20 overs.