Spring - a season of joy in Kashmir 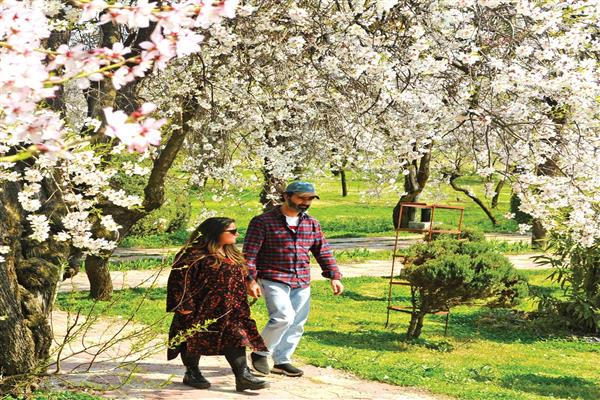 Explaining the cultural, communal harmony, and spiritual significance of the spring season, Zareef said that the early bloom of flowers on Almond trees at Badamwari Srinagar indicates the arrival of spring in Kashmir.

Under the foothills of Hariparbat fort, Badamwari was established by the Mughal emperor Jehangir.

The spring season in Kashmiri language is called Sonth. It is a period of two long months starting from mid-March and ends in mid-May. The season revives and gives life to the greenery, trees, flowers after the colder winter months.During spring, plants begin to grow again, new seedlings sprout out of the ground.

Spring flowers are in full bloom in the famous Mughal gardens in Srinagar city. Dozens of tourists and locals are visiting Shalimar, Nishat and Chashma Shahi gardens which have been thrown open to the public.

Kashmir these days presents a mind-boggling contrast to the visitors from the heavily snow-clad Gulmarg, Pahalgam and Sonamarg to the flower bedecked Mughal gardens around the Dal Lake.

The historical Badamwari Garden, built in the middle of Srinagar, displays a unique view of Kashmir Valley.Visitors walk past blooming almond orchards during a sunny spring day in Srinagar.

Abdul Samad, 55, recollects the memories of majestic gardens in Kashmir which exhibited the Kashmiri culture, unity, harmony and identity.

Samad, who hails from Rainawari area, said that he would always seek spiritual solace and ease in the beautiful gardens in the valley. “The beautiful vibrant colours of flowers are a treat to the eyes and relieves a person,” he said.

"Some people used to bring Samovars (copper kettle) filled with namkeen tea and enjoy it in the garden. Now this all has gone missing," he said.

Like Samad, there are other elderly people who have witnessed the real beauty of the spring season.But currently, the scenario has changed as no such festivities, gatherings depicting culture are seen in the spring season.

According to the Zareef, people from cross sections of society and religions used to celebrate this season together.

Zareef said that the scenario of Badaamwaar garden in Shahr-e-Khas was rendezvous." People of all religions along with their families used to visit the garden and sing wanwun (Kashmiri lulably) which was a treat to the ears.

He said that spring is back in Kashmir. Thanks to historical Badamwari or the almond alcove, which is not just drawing crowds but also bringing back good old memories.

Zareef said the smell of almond blossoms in air used to spread in every corner of its surrounding areas.The almond trees are blooming and the fragrance of flowers is a source of inspiration for everyone.

" We used to collect the blossoms of almonds and with the help of thread and needle make Malah (garlands) then almond blossom malah was stored in our homes and was added in kahwah to increase the taste.The strong fragrance of almond blossom used to rejuvenate the lives," he said.

Different flowers like yemberzal (Narcissus), Sumbal (Hyacinths), Maschwal, Virkum( the plant is found commonly near Srinagar-Tragbal and other areas. Its golden yellow flowers are the earliest ones to blossom in spring in Kashmir), Tek batan etc are all flowers of spring.

The famous old spring eatables of Kashmir are handh(Dandelion greens), kretcz  (Knapweed) , Leesae (red amaranth), nunnar(Purslane), aubuj (rumex). After winter, these edibles give a cooling relief to the stomach and vanishes all warmth.

A variety of flowers bloom in the spring season. The most important flowers in this season are roses, tulips, daisies, lilies, and hyacinths.

Another attraction of Spring is the opening of Tulip Garden on the foothills of Zabarwan in Srinagar. The garden is Asia’s largest tulip garden with an overview of Dal Lake and spread over an area of about 30 hectares of land.

Tourist departments have prepared themselves for a boom season as they saw the winter tourism at its best after decades. "We are planning the activities and destination for spring season.Earlier, it remained confined to Tulip garden but now we have planned to organise attractive programs, and this will extend spring,” said G N Itoo, Director Tourism, Kashmir.

Tourist players too have expectations of a marvellous season. And definitely it will revive the Kashmir tourism industry.