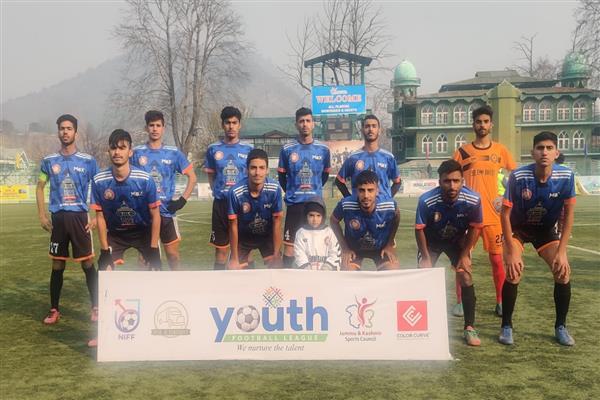 The final match of the League was played between J&K Bank Academy and Sports Council Football Academy which ended in a draw with each team scoring 1:1 goal, but the League title was taken away by Sports Council on the basis of points table.

This was the first of its kind of initiative taken by NIFF in which any junior level league has been organized in a professional manner giving much needed opportunity to the junior players to excel and showcase their talent.

A total of 42 matches were played in the league in which 24 football academies hailing from Kashmir Division competed against each other.

The League was sponsored by New JK Roadways who also awarded players with handsome cash awards on every match.

Secretary, Tourism and Culture Sarmad Hafeez, was the Chief Guest on the occasion.

The gala prize distribution ceremony took place soon after the match awards were given to Media Fraternity, Medical Personals, Sports organizers besides players and officials by the Guests.

The event was organized by NIFF in collaboration with J&K Sports Council and was sponsored by New JK Roadways. Pertinent to mention, NIFF is going to organize the same League at Jammu from December 26, 2021.