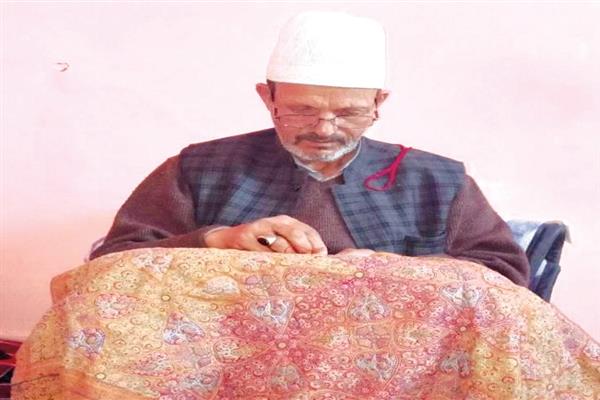 Kashmir is known for its ethereal beauty and has a rich history of art in handicrafts, especially the making of extremely fine, delicate, and artistic hand embroidered textile products which is also one of the great means of livelihood for Kashmiris.

A 72-year-old artisan, Ghulam Mustafa Mir is known as Sozni Maestro of Kashmir. He has been training people for the past seven decades and has represented Kashmir at national and international levels through his unique art of work.

Sozni (shawl baafii), is described as a technique of meticulously fine embroidery layout to make the fabric look encrusted like a tapestry.It is known as most sophisticated form of needle embroidery, introduced to the people of Kashmir by Islamic Saint Shah Hamdan (RA) in 14th century. The delicate and artistic needle work is only practiced in Kashmir and has no parallels anywhere else.

Hailing from Sonapah area of central Kashmir’s Budgam district, Mir is an expert having great knowledge of Sozni embroidery designs and unique color combinations. He is presently working as an instructor through the Handicrafts department to train 60 girls under Samarth Training Program 2020- 21.

“I was engaged into this profession since my childhood and at 15, I formally started working as an artisan with dexterity, devotion, and responsibility towards his artistic abilities and traditional business,” vetran artist, Mir told Rising Kashmir.

Mir is now a dedicated organic farming expert and a great persevering personality who has been much instrumental in preserving the inherited knowledge and practice of Shawl Baafii by continuing to pass it down from generation to generation.

As per Mir, Sozni craftsmen are men and women from Kashmiri villages who are mostly farmers. Since Valley is an agriculturally rich area and most of the people in villages are involved in fruits, cereals, and animal farming.

“Farming in Kashmir is not a full-time effort, due to the prolonged winter season. So the livelihood of most of the people depends on Sozni work as artisans,” he said.

Mir says he started practicing Sozni in 1965 and got his registration with the 'State Handicrafts & All India Textile Handicrafts " done in 2008- 09, due to lack of awareness and government initiatives.

He has spent all his life cherishing the heritage and bringing positive development to Kashmiri society. Mir has contributed much to the profession and represented India on the global stage of quality art.

Ever since, his talent, finery, and vintage art of Sozni have been recognized, appreciated, and promoted on some National and International platforms.He has also bagged national and international awards for his unique work.

He was honoured with National Award in 2013 from ex-President of India Pranab Mukherjee in an award ceremony of Shilp Guru and National Award to Master Craft persons for year 2012-14 organized by the Ministry of Textiles in December 2015.

He also participated in Craft Mela in Surajkund Haryana in February 2017, the Master creation program in Delhi (Delhi Haat) in Dec 2018, and held a workshop and Dastikar Haat Exhibition in Mar 2018.

Mir has also participated in various workshops and exhibitions of the north region held by DC Handicrafts and private organisations.

In Mir’s family, his son Mohammad Maqbool bagged first prize under his able guidance in 2012 which was presented by the then Chief Minister, Omar Abdullah.In 2021, his brother Ghulam Hassan Mir was honoured by LG Manoj Sinha for his contribution to Sozni work.

Apart from their achievements, Mir has represented Indian Art at the global level.He was among the five artists who represented India in the exhibition of Indian Handicrafts titled ‘Namaste Stockholm’ held in the Swedish capital of Stockholm.

Mir has a remarkable contribution in empowering the women and weaker sections of the society.He has been organizing free training sessions and has guided thousands of people since 1970. Mir has become the inspiration for unemployed youth from Sonapah, Beerwah, Attina, Hayatpora, Sodipora, and other adjacent areas.He helps them to earn a respectable livelihood.

In 2017, Mir started a special training program for poor and needy girls under Guru shishya Parampara scheme (Ministry of textiles).

Mir explains that within the process of Sozni Shawl Baafii, ‘Block Printing’ is an important step, wherein, the carvings of the wooden block itself form a part of great craftsmanship.

Engraving the design on wooden blocks, based on a design prepared by the Naqash, is a master skill of wood carvers specialized in shawl design and who generally use traditional hand tools to chisel.

Mir says another creative and significant step is the choice and sampling of colours to be used in the design by Tarah-Guru before the design is approved by another Master Craftsman called Voste.

“Once the embroidery is done, final washing of Shawl is done in spring water with mild detergent by specialized washers, and later fringes may be added to dry up Shawls,” he said.

“For those who religiously consider their artwork as worship or prayer, it sometimes takes more than a year or two, to create a masterpiece. The artisan, as well as the customer, takes a lot of pride into creating and wearing,” Mir said.

In the present cultural scenario and economic environment, he said, when mechanization is considered the most profitable for mass production, these craft traditions face serious challenges and many of Indian heritage skills are at risks of being lost forever.

“It becomes obligatory for us to support the work of artisans, facilitate and motivate them to maintain the craft," he said, adding it would also encourage the upcoming younger generation to enthusiastically learn, innovate, and create their individual styles, along with carrying on the legacy and not worrying about financial issues and fame.

About shawl making, Mir says the embroidery is usually done on a pashmina shawl. The pashmina fabric is a kind of wool that is obtained from Kelly goats in the higher reaches of UT.

Then the wool is obtained from these goats, processing it manually and a thread is made by artisans. The pashmina fabric is made out of threads and Sozni craft person makes shawl from the fabric.

“Then the fine piece of pashmina shawl is made available for design to be drawn on it, using carved wooden piece like a stamp, in Kashmiri language, it is called Chhap,” he said.

After doing the basic design work on the shawl, Mir uses colorful threads of Rashim. This Rashim is obtained from silkworms reared on mulberry tree leaves in Kashmir.

The combination of different colors of thread is used to draw the unique design on the pashmina shawl.