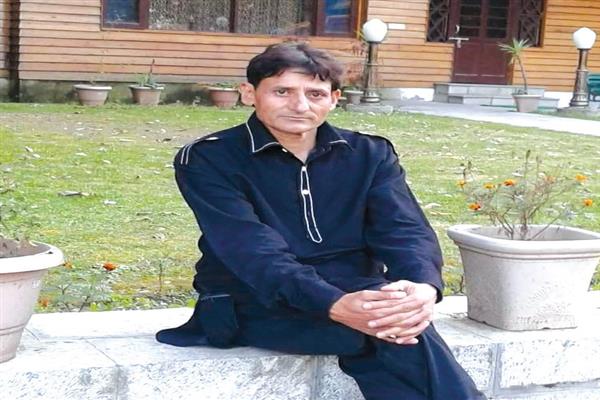 Kashmir is one of most culturally rich places that has produced numerous folk singers who have ruled over the hearts of people for decades.

Manzoor Ahmad Shah is one such folk singer who has been mesmerizing people with his soothing voice for the past three decades and has taken lead in reviving the folk music in valley.

His song ‘Pooshe Mateo Ninder Payem Cheni Gazal Gawan Gawan’ is among the most famous songs among the people. It has gained popularity on Radio, Television and still is being played and liked by youth on new media platforms.

Hailing from Srinagar, the 44-year-old veteran artist has sung around 14-15 thousand album songs at different platforms and has gained popularity among the youth.

Shah was born and brought up in Khaitangan village of Baramulla district. His father worked in the education department and wanted to see him as a civil officer but Shah was more inclined toward listening to music.

“My mother’s house was in Dangiwacha Baramulla, where Ispent my entire childhood. In village, many families were associated with music and singing. Each day after school, I used to take part in their Mehfils” Shah said.

He says he remembers his first teacher Ali Mohammad Bhat who helped him a lot in understanding and learning the music.

Shah believes that music has added charm to his life that would have been monotonous and boring without it. It connects hearts, opens horizons of the mind, and gives immense pleasure, he said.

“It acts as a bridge between cultural heritage and different backgrounds. It erases the line that defines all borders and allows a group of distinct people to feel the same thing at the same time,” he said

In Rafiabad, Shah’s talent was spotted by Rafiq Masoodi, who worked at that time with Radio Kashmir. They had to do a musical concert in Rafiabad and for that, they were holding auditions. “I passed that easily and was selected for Yuva-Vani,” he said.

Shah is among recognized singers at All India Radio Srinagar, Doordarshan Kendra Kashmir, and is also affiliated with the Jammu and Kashmir Academy of Art Culture and Languages. He has hosted many cultural programs, and shows at the Department of Information and Public Relations.

“Radio and Doordarshan have played a vital role in grooming my personality. When i started working with Radio and Doordarshan, it proved to be the turning point in my life.People loved my performance. Wherever I go anywhere, people used to follow me,” he said.

The veteran artist says to make folk music popular in Kashmir, he remains connected with youth. He often take suggestions from them and always get a good response.

He said, “Kashmiri music is in my blood, and I have been associated with music ever since I opened my eyes. The music has always been there within me. Kashmiris has immense talent and lack a platform to present it.”

He is connected with his wide fans across the globe. Each day he get praisesand suggestions from the people around the globe through the social media, he said.

Shah believes that music brings love into the air and makes people feel more connected and creates memories that will last for a lifetime. “Many people question about my voice as it has not been changed over the past three decades and my reply to them is always it is God’s gift,” he said.

He has also been conferred with Ustad Bismillah Khan Yuva Purskar in the year 2017-18 and the Gulshan Cultural Forum Kashmir Award in 2022 for his outstanding contribution to folk music of Kashmir.

Shah said the foremost responsibility on part of the government is to formulate a proper cultural policy for the promotion and propagation of folk music in the Valley.

“Folk music training should be imparted in all the schools and colleges of Kashmir. It should be made a part of the curriculum in educational institutions,” he said.

Shah believes that there should be a provision of financial assistance and maintenance grants to artists so that they earn their livelihood and be able to pay full attention to the art form.

He said that many talented artists are sitting at their homes as there is no monitoring who is hired for the events and festivals.

“ I have also started my digital platforms including YouTube and Facebook, where I good number of subscribers and followers. My fans like my voice and I hope that they will continue loving the same,” he said.

About his message for young artists of Kashmir, the veteran folk singer urged the youth to work hard to achieve their feat. They should learn music professionally. There are hurdles everywhere but it is patience and struggle that determines life of an artist, he said.

“They should promote their own Kashmiri musical instruments and use them in their songs,” Shah said.

He said over the past several years, the music industry in Kashmir has been hit by the pandemic, but it will revive again. “We will not lose our hope. We will continue to strive and move forward,” Shah said.

Shah believes that the poor artists are being neglected by the Radio and Doordarshan, today. Only few artists are getting good programs through some departments, he said.

Apart from Kashmir, Shah has also performed in musical concerts across India where he got good responses from the people.

About the future of folk media, Shah says the government should wake up and take concrete measures to revive it in Kashmir. He says, government should grant special pension benefits to veteran artists who survived folk music and performed it on all levels.