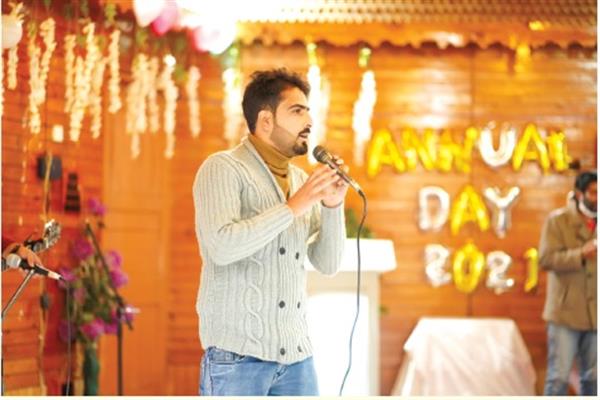 “Everyone is doing their bit. I also want to do my bit and want a change in my society through rap songs. I rhyme about social issues pertaining to my society,” says Wani Arman who goes by the stage name Rapper Ashu.

Since 2012, Rapper Ashu has been pumping up the heat by rapping against the social issues including substance abuse, lavish fat weddings, corruption, suicides and other social issues.

Hailing form from Sopore in north Kashmir’s Baramulla district, 28 year old self-taught rap singer is an IAS aspirant. He has been a student of Political Science at the University of Kashmir and is currently working in Amazon.

“In 2008-2009, when I was studying at SRM Welkin Sopore, I used to talk to my friends and family in a rhyming style. Even at home, I used to ask my mother about food and it was like ‘Mein Ghar Aaya, Tum ne khana nahi laya; Tum ne kya hae Pakaya’. In 2010-2011, I got to know what I am doing is called rap. With the passage of time, I fine-tuned my skills, self-studied and polished them. In 2012, I performed on stage during the farewell ceremony in front of a massive gathering at my school and from there only I got this idea as how to connect with the audience and pass on your message to them,” he said.

Till 2017, Ashu was like any other rapper rhyming it for the sake of rap. As a hiphop rapper you should make content that you can watch along with your family and if not then you are doing something wrong.

“Year 2017 changed my life. I started writing in Kashmiri and that too on social issues with a blend of satire. I tried to be funny in order to deliver the message to people. Earlier I used to rhyme in Punjabi,” he added.

Ashu has around 21 rap songs to his name and in which 7 rap songs are about social issues and were a hit including Kashmir Ki Shadi (a satire strongly arguing against fat and expensive weddings); Drug Free Kashmir (highlighting drug abuse in Kashmir); No Suicide (When Bollywood actor Sushant Singh Rajput died by suicide); Batti Gul (a song on the power crises in Kashmir); Internetuk Sitam (highlighting the plea of Kashmiris because of frequent internet shoutdowns); Rishwatuk Bapaar (focusing on corruption).

Right now, rapper Ashu is working on a new project about the new trend of isolating parents in their old age.

“The concept of old age homes was alien to our society but unfortunately we are witnessing a new trend of old age homes and isolating parents. Children are preferring isolation from parents. In my rap song, I will portray how parents treat their children in infancy and how the children should treat their parents when in old age.I want the youth to understand the role of parents in a child's upbringing and how to appreciate their care and love for kids,” he added

Ashu claims to be the only rapper to judge more than 3 offline talent hunts across Kashmir and has performed in more than 100 live events.