Generally speaking, snowfall is related to winters only and winter is the coldest season of the year in Polar and Temperate zones. It occurs between Autumn and Spring 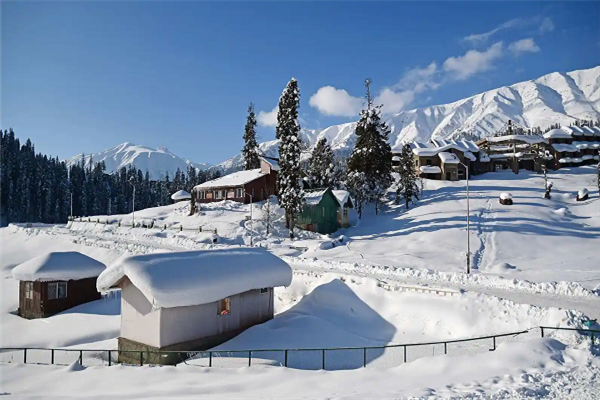 February is the month where winter season is on a roll back and you can still get out of your quilts to not fear the spine chilling bone. It is important to get out your snow boots and warm mittens to stay warm while you explore Kashmir.

But surprisingly between the intervening night of 22-23 Feb 2022, major snowfall took place which disrupted normal life in Kashmir. Flight operations, surface transport and routine activities came to a stand-still in the valley. Around 5 inches of snow accumulated on the ground in the Srinagar city. Flight operations from Srinagar International Airport were delayed as visibility at the runway dropped to less than 500 meters. Train services from Banihal to Baramulla were suspended for Wednesday while multiple landslides at different places blocked the Srinagar-Jammu National Highway. All professional and other examinations scheduled for Wednesday were postponed by Kashmir University.

In most places in Srinagar city and rural areas, electricity supply remained adversely affected due to the snowfall, although authorities said that both road clearance and electricity restoration was in full swing.

Reports from Gulmarg Ski-resort said 15 inches of snow had accumulated on ground while at other places in the valley the snow depth varied from 4 to 8 inches.

In February in Shimla India, it is snowing for 1.8 days and 63 mm of snow accumulated. In Manali snowfall cannot be predicted even a week before. Nevertheless you will get snow in and around Manali in February.

If you are hoping to catch live snowfall, this is the time i.e., February to visit Gulmarg in winter, opt for skiing down the lovely slopes of Gulmarg where Gulmarg will be buried under several feet of snow.

Months with snowfall in Gulmarg are December to April. In February, it is snowing for 6.3 days and 118 mm snow gets accumulated. You can create your own snowman in Feb in Gulmarg. Make sure, you pack heavy woolens as the temperature dips down till minus 4 degree Celsius. March to June constitute the Summer season in Gulmarg but this is also peak tourist season here.

Comparing Sonamarg with Gulmarg, I would say that Sonamarg is better than Gulmarg. Sonamarg which literally means “The Meadow of Gold”, is any snow-lovers paradise in winters. A popular destination among the snow and mountain lovers, this place is covered with a beautiful sheet of snow in the peak winters and is a sight to see and experience. I like the variety it has to offer from hard bare mountains to the lush green meadows, milky white river, view points, snow activities and Glacier. But Gulmarg has the Gondola ride.

Generally speaking, snowfall is related to winters only and winter is the coldest season of the year in Polar and Temperate zones. It occurs between Autumn and Spring. The tilt of Earth’s axis causes seasons. Winter occurs when a Hemisphere is oriented away from the sun. Different cultures define different dates as the start of winter and some use a definition based on weather.

The English word winter comes from Germanic Noun “Wintru” whose origin is unclear. Winter is often defined by meteorologists to be the three calendar months with the lowest average temperatures. This corresponds to the months of December, January and February in the Northern Hemisphere and June, July and August in the Southern Hemisphere. Diamond Dust also known as ice-needles or ice crystals, forms at air temperatures approaching minus 40 degree C due to air with slightly higher moisture from above mixing with colder, surface based air. They are made of simple Hexagonal ice-crystals. Accumulation of snow and ice are commonly associated with winter. Snow occurs year round in Antarctica.

In short, winters are blessings of Almighty like summer and other seasons of the year. We should thank Almighty Allah for His Blessings every time.

(The Author is Columnist. Email: gmmir50@gmail.com)