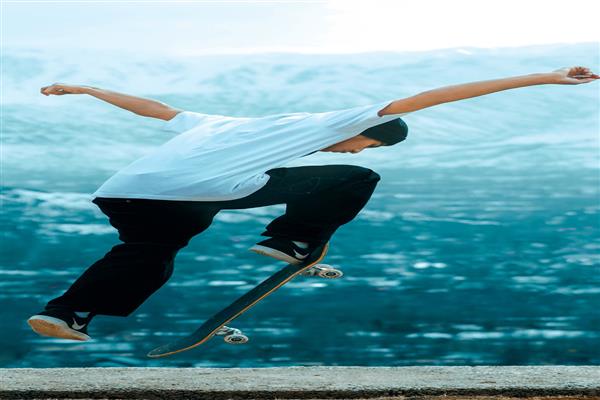 Every day at 6:30 in the morning, a group of boys make their way towards the streets on their skateboards. The young boys indulge in tricks like kick flips, heel flips and freestyle skateboarding.

One among them is War Burhan from Baramulla who has been skateboarding since 2017. The 23 years old skater has been a snowboarder as well from 11 years and has also been the national medalist and state medalist twice in the snowboarding. After finding considerable similarities in the techniques of the two games, Burhan started skateboarding too.

He said, “Snowboarding and skateboarding have the same mechanics.  During summers, I wasn’t doing any activity and I was inspired by watching skateboard movies and videos.”

Burhan uploaded his video of skateboarding on Facebook and started finding more skateboarders from Tangmarg, and other areas.

It took him some time to get the response from the skateboarders of Srinagar and other districts which later on became a community. Currently the community has 60-70 people.

In Baramulla, skateboarding is gaining momentum and according to Burhan the best skateboarders are from Baramulla and its adjoining areas.

Burhan has been offering free classes to the boys and a few girls who are interested in sports.

“Due to societal pressure, girls are still not able to come forward. In sports, there is no boy or girl but it will take some time for the society to accept,” he said.

Burhan said that for skateboarders, there is no dedicated space to practice. “Skaters have been practicing on roads and in homes due to the unavailability of skate parks. We are not getting any facilities for the sport. We approached the governor's office and other government officials regarding this but nothing was done so far,” he said.

He further said that the sport calls out all people together in a community and improves their mental and physical health.

“In western world, it is one of the mainstream sports. Skateparks are the place where skateboarders can come together, learn and feel appreciated. It can attract visitors and change the perspective of people who misjudge skateboarders,” he said.

In 2020, skateboarding was one of the four sports added to the Olympic program.

He said, “I started skateboarding from home and then I came in contact with people of Tangmarg, Kunzar, Gulmarg and we thought of making a community.”

For construction of a skate park, Amaan along with others got in contact with some outsiders but the only hindrance was the absence of the support of authorities.

He further said with skatepark, the skaters can get an opportunity to participate in national championships or represent Kashmir at a bigger platform.

“Like other games are getting attention, skateboarding should get the same. The scenario of skateboarding from Anantnag is good. We do practice daily and upload videos on social networking sites too,” he said.

On Sundays, the skateboarders leave with skates in the morning and come late at night. Other days, 4-5 hours of practice is sufficient.

“We find a place, clean it and start practicing. I have been receiving messages from a lot of people that they want to go for skateboarding but I am not able to respond because of the unavailability of the skate park. If there will be skateparks in one or two places, that will be enough,” he said.

Talking about the coaches he said that there is a coach for roller skates but for skateboarding there are no government coaches available, here.

The society has been giving mixed responses to their skateboarding scenes. He said that he skates his way from tuitions to home and his parents have been offering him full support.

“People say that skateboarding is not for roads and call us kids. My parents are supporting me a lot and they want me to learn new tricks with it. My skateboard got damaged a few weeks back and they immediately got me a new one,” he said.

Longboarding, cruzer skateboarding, freestyle and dancing skateboarding are some of the styles that are known to him. Skateboarding is something he can’t live without. Being a phone addict in the past, he said that now he hardly finds time for phone since he has started skateboarding.

“If youth try these things, they will get a completely different vibe. People should try this. Though some people shoo us away but some are also curious to try the skateboard.”

The styles and tricks can be numbered when one is on a skateboard. Amaan said, "Balance is important in skateboarding. I used to hold a rope and skate while I was learning the basics."

Another skateboarder from Bulgam, Sopore, Mohammad bin Javid has won a competition in Bangalore. Practicing on boards for 3-4 hours daily has made him pro at some of the cool tricks.

While sharing his experience of a competition held at Bangalore where skaters from countries like Nepal, Maldives and other countries had participated, he said, “Initially I was nervous in the first two rounds and then I was confident. I won the 3rd prize in the competition.”

He further said that initially he found it difficult to learn and used to get frustrated a lot but he didn’t give up and continued learning.

17 year old Ayaan Manzoor from Srinagar started skateboarding in 2021 and also started a community. With his friends, he goes for a practice session.

“It’s an adventure sport. It has an excitement. It has a vibe. There are a number of tricks and techniques in it so you are at a liberty to do anything but the thing that is stopping us is the absence of a skate park,” he said.

He further said that the craze of skateboarding is gaining popularity across the country but very few states in India have a skatepark.

“People think skates and skateboarding are the same but there is a difference. Skateboarding is not about looking cool but it’s about creativity. It is a creative sport too. We do the tricks that are already there and also try to make some on our own,” he said.

Ayaan along with the others usually find their way towards Boulevard Road, Dal Gate where they practice, make videos and upload on their social media handles. “It is a different sport and you take out your frustration and stress over it. It’s like venting out everything,” he said.

Talking about the injuries happening in the sport, he said, “Injuries, falls, bruises are part of it and one can keep themselves safe by wearing the helmet and other safety guards,” he said.

Another skateboarder from Srinagar, Faizan Khan was inspired by his friends. The 16 year old skateboarder has been cruising for a year now. Believing that there has been a steady rise in the number of skateboarders in Kashmir, he hopes that society will one day cope up with the emerging sport.

“Some people are amazed when we do it. In Srinagar, a good number of people skateboard. Many people want to join us. Some people even try skateboarding with us. One of the locals who was 35 years old also tried,” he said.

He said that due to the absence of parks, the skaters have to move on roads which have caused damage to their skateboards.

“Many a times, police have taken our board and people have also complained against us. Skateboarding is an alternative which keeps a person away from addiction and other social evils,” he said.

Being interested in other games too, he said that despite having no infrastructure to support the sport, the skateboarding scenes are thriving.