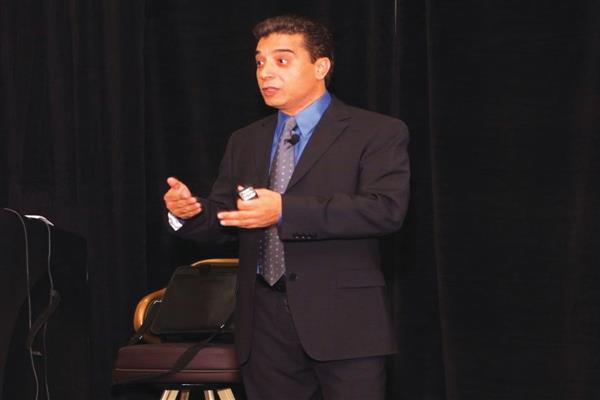 Despite making it big and being named among the top 50 CEOs in the United States of America, Shafat Qazi still remembershis father's hug at the Srinagar Airport, when he told Qazi not to expect any further financial assistance other than the $700 that he gave him.

The Founder of BQE Software - a business management software firm, Qazileft Kashmir as a young boy to follow his dream and passion of creating technology to simplify the lives of people around the world.

“When I reached the USA, my fee at the university was $22,000, while I only had $700 in my hand. The government at the time limited the amount of foreign exchange I could take out of the country, "said Qazi, adding “after hectic efforts, I managed to borrow $5,000 from my cousin to pay for my 1st-semester fees. That was the only debt I took on.”

Qazi, immediately, approached a candy store and the cafeteria at the university for odd night-shift jobs and started earning just enough to pay his bills and tuition fees. “I was not embarrassed or hesitant to work as a cashier at the candy store or as a waiter at the cafeteria. I knew it was temporary and a stepping stone to get to my ultimate goal of building my own technology company. "

Qazi believes a positive and optimistic person is more likely to succeed than a negative and pessimistic person.

He said, "Technology is the digital plumbing of every business. I was naturally good at it, and that helped me build a great business on top of it.”

After graduating from the State University of New York, Qazi relocated to California and began working for David C. Breiholz, Inc., eventually becoming a partner in the firm, which was later renamed Breiholz Qazi Engineering (BQE).

He was appointed the chairman of the Structural Engineers Association of California (SEAOC) Computer Applications Committee.

He holds a master’s in structural engineering from the University of New York and a bachelor’s degree from the National Institute of Technology (NIT).

While working as an engineer, in 1995, Qazi developed a billing software program, BillQuick. By 1998, Qazi left his engineering firm and devoted himself full-time to BillQuick and his company, BQE Software.

Today, Qazi has around 260 employees working for his company from many countries, which include the USA, Australia, India, Mexico, Philippines, etc. Half of the employees are working at the Srinagar office, providing service to thousands of businesses all over the world.

Qazi chose his hometown of Srinagar for the offshore office, despite the fact that the region is prone to challenges. Running a technology-based office in Srinagar, where the internet is sometimes disrupted, was not a simple assignment, said Qazi. However, “I believe that if a proper system is put in place, efficiency will follow.”

Qazi founded BQE in 1995 to simplify the lives of millions of service professionals. An engineer by profession, he was acutely aware of the pain professional service firms endure when it comes to billing, accounting, time tracking, and project management. He created the original BillQuick in his garage.

Two decades later, as he oversaw a global enterprise, he was listed as one of the top 50 CEOs by USA Today in 2018. Despite this, he has never forgotten his roots, and BQE remains at the vanguard of customer-driven innovation.

His journey began when he spent eight years working for a structural engineering firm, including six years as a partner.

During his time as chair of a committee for structural engineers, he visited hundreds of professional service firms and noticed the same problems everywhere. Engineers and architects were focusing on bookkeeping rather than designing buildings, bridges, or roads. There had to be a better way, so he stayed at home and worked out of his garage to invent BillQuick in 1995.

The goal was to create a world-class solution that would make the lives of millions of engineers, architects, accountants, attorneys, and other professionals in the service industry easier.

Even though he leads a worldwide corporation, BQE continues at the forefront of customer-driven innovation under his leadership. This is the company that debuted its initial Web-based product in 1997, a mobile app for the flip phone in 1998, and electronic bill pay in 1999. BQE and its personnel are forerunners in the industry.

But Qazi never let them forget where they came from. They are cut from the same fabric as their customers. Every year, the company’s biggest focus is continuing to simplify the tasks their customers perform and reduce the time it takes to complete them. Add in a steady dose of the invention and the company continually produces concepts that get adopted by the broader technology space.
When Qazi was listed as one of the top 50 CEOs, he became the first and only Kashmiri to have achieved this status. When he’s not managing the company or working on a new invention, he enjoys flying planes, listening to music, and traveling. So far, he’s visited 55 countries out of a goal of at least 100. Qazi is also passionate about preserving the Kashmiri language, culture, and music.

"I am always looking for great business innovation ideas or startups that need help," says Qazi.