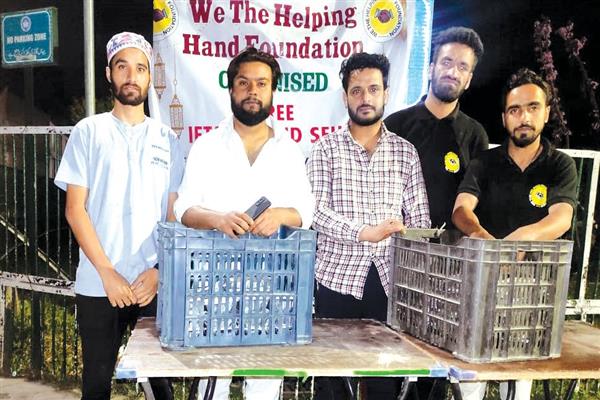 In the holy month of Ramadan, a number of local volunteers and Non-governmental Organizations (NGOs) are providing meals to people during Sehri and Iftar in hospitals, major highways, and busy streets.

Muzamil Nazir, along with his team is serving Iftar meals every day to more than 1000 people from all walks of life at Kashmir’s largest healthcare institution, Sher-e-Kashmir Institute of Medical Sciences (SKIMS).

“In this blessed month of Ramadan most of us, Alhamdulillah, have plenty to have in Sehri and Iftar. But there are many in our surroundings who do not have this privilege,” he said.

“For the past four years, we were serving Iftar meals to patients, attendants outside the SKIMS hospital, and in 2021, we decided to start the serving Sehri also,” the young volunteer said.

Muzamil, hailing from Nishat area of city, works in a private company and his associate Umar Wani from Nagbal is chairman of the foundation. He is running a small-scale company.Both started, ‘We The Helping Hands Foundation’ in 2014 to reach out to the poor and destitute in Valley.

“Last year, we used to get sehri meals preparedfrom a local restaurant for more than 600-700 people, but this year to minimize costs we started langar services (community kitchen) through which we prepare sehri meals for 800-900 people outside the hospital,” he said.

“Mainly people contribute to this noble cause. We are just facilitators and it is one of the best services during the holy month of Ramadan,” he said.

“When we started the community Iftar in 2016, we were serving only a few dozen people. Over the years, the number of people coming to have iftar increased,” he said.

Muzamil says they work in shifts as per roaster to avoid confusion. Some members are continuously staying in the community kitchen outside the SKIMS.

Apart from providing meals, the foundation is providing grocery kits to 35 poor families and bears educational expenses of 44 orphan students of Srinagar up to 10th class.

Muzamil says their foundation is mainly focused on the education and marriage sectors. Recently we organized 21 mass marriages in Srinagar, which included the marriage of a non-Muslim couple.

Athrout, a Srinagar-based charity organization is working with 13 other NGOs across the valley to reach poor and destitute families.

Chairman of Athrout, Bashir Nadwi told Rising Kashmir that before the onset of holy Ramadan, they distribute two kinds of kits including food and Ramadan kits.

Nadwi said 50 volunteers were involved in this noble work. From last year onwards we started work with trustworthy and active NGOs, groups who are working in far-flung areas to assist people, he said.

“We collaborated with them and provided them both Ramadan special kits and food kits to be distributed among the needy and underprivileged so that their holy month goes uninterrupted,” he said.

Nadwi said they are mulling to organize mass Iftar functions in the last 10 days of the Ramadan.

Similarly, Junaid Mir, along with his four friends are distributing Iftar meals at various traffic signals along the Srinagar-Baramulla national highway at Bemina since the beginning of Ramadan.

“The initiative aims to provide Iftar meals to drivers who are unable to reach home in time to break their fast, hence refraining them from speeding as they try to rush home to have Iftar with their families,” he said.

Mir said the initiative not only reflects the spirit of the holy month, but it also helps avoid road accidents caused by speeding.

Hailing from Hyder Colony, SDA Bemina, Mir says they are five friends who had started this initiative. His other associates include Uzair, Haris, Abdul Hadee, and Ishfaq Ahmad. We donate money from our own pockets for the noble cause, he said.

The volunteers arrive several hours before the Iftar time to take care of all the necessary arrangements. Each day, we prepare 100-120 Iftar packets after 5 in the evening.

Mir, who is a businessman by profession, says the initiative came to consolidate the concept of community Iftar and positive support for such things in the society. Mostly highways are neglected and there are no arrangements for the people, he said.

“In five minutes these packets are being distributed, so initiatives are need of the hour. We should inculcate such values among our youth,” he said.

During Ramadan, he said they also get food kits from UNCF (Ummat Un Nisa Cares Foundation), Mumbai. So far we have distributed 50 food kits to poor and destitute families in the Srinagar, he said.

Amir Rasheed, who is the founder of ‘Mouj Kasheer Welfare Trust’ told Rising Kashmir that they are distributing Iftar packets in major hospitals of Srinagar including JVC hospital, Children’s Hospital Sonwar, SMHS hospital, and other places.

“Under NGO’s street Ifari project, each day we distribute over 280 packets outside hospitals in Srinagar. Mainly Iftar meals is distributed among attendants and needy,” he said.

Amir says in hospitals there are no such arrangements for community iftar. We have started this initiative and hope that in future more people will join this noble cause,” he said.

Apart from street iftari project, he said they adopted 5000 families across Jammu and Kashmir, and they are providing ration and other commodities during the holy month of Ramadan.

“Our main focus is mass marriages and education. We are assisting hundreds of families each year and will continue to serve society. Our trust has also started Ambulance services, Oxygen service, etc,” he said.

Hails from Goigam Magam area of north Kashmir’s Baramulla district, Amir claims their trust has contributed a lot towards the weaker sections of the society. Our organization is a non-governmental, non-political and non-profit organisation.

The NGO has also worked during Covid pandemic and helped the distressed people in by providing food and other essentials to the needy and is still trying to reach every needy person.

Amir says 87 volunteers are working with his trust across Kashmir and they are committed to serving the people in future also. They are tirelessly working for the welfare and betterment of the weaker sections of society.

Azzhar Malik, who runs Hyemath Kashmir, a local NGO group that serves Iftar to hundreds each day at GB Panth Hospital Sonawar, Lala Ded Hospital and along major highway junctions in Srinagar. The group became active during the covid19 pandemic and started reaching out to the underprivileged and poor.

Malik told Rising Kashmir that each day they serve 100 iftar packets and on Friday the number is doubled.

“It is the month of charity and a month in which a believer’s sustenance is increased. Whoever gives food to a fasting person to break his fast shall have his sins forgiven,” he said.

Malik says apart from Iftar, the group is providing Ramdhan kits to underprivileged families in Srinagar. Each week, we are providing 15-20 kits to such families, he said.

“We have 7 permanent members and 25 volunteers who are associated with our team. Each day we assemble, then plan and distribute the Iftar packets among the people,” he said.

Malik says Ramadan is a month of sacrifice, compassion, promoting justice, peace, and harmony. "We have been able to provide kits to more than 500 families so far and aim to feed the underprivileged during the month of Ramadan,” he added.