‘Great things are done when men and mountains meet. This is not done by jostling in the street’---William Blake 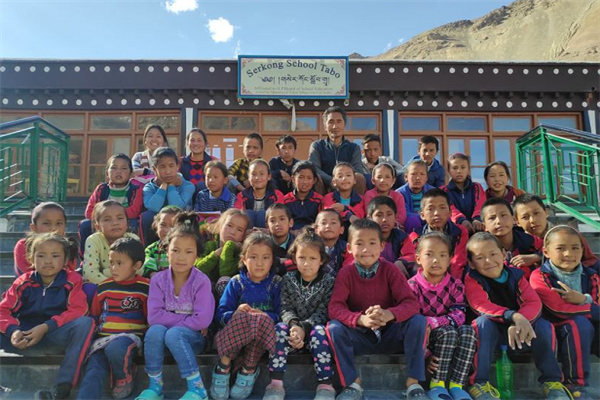 High in the Himalayas where the air is rarefied, your feet laden heavy on the move and mind’s eye wide awake to soak in the colours, sights and sounds, lie the forbidden country of Lahaul & Spiti ensconced from all sides by the granite grey towering peaks .Lahaul&Spiti district of Himachal Pradesh is one of the least populated districts of our country’s 748 odd total districts as on date. Spiti barren and difficult to cross, with an average elevation of 4270 meters (14,012 feet), is an  area as mentioned above enclosed between lofty ranges, with Spiti River rushing out of a gorge in the south easterly directionto meet the mighty Sutlej River.It is a typical mountainous cum cold desert area with an average rainfall of only 170mm.The district has close cultural ties with “Ngariprefecture”of the “Tibetan autonomous region” under Chinese occupation due to its close geographical proximity to the later.

Having had quite a few chances to criss cross the terrain of the high Himalayas as found obtained in Ladakh and neighbouring Himachal Pradesh while in service, one developed a natural affinity for such people, places and events etc.Bleak existence of this harsh northern area of our country notwithstanding, hides many a surprise for the vast majority of us Indians in the form of amessage that a large section ofour society is carving out a bright future for themselves in the absence of much needed financial and material succor from rest of India. “Serkong high school” at Spiti run under the aegis of the world famous “Tabo monastery” of Himachal Pradesh is one such surprise waiting to etch out the destiny of hundreds of its school going children.Way back in 1996 I have had the chance of visiting the world famous Tabo monastery while it was in the midst of it millennium celebrations of foundation day with HH Dalai Lama too gracing the occasion for the annual “Kalchakra ”event to bless the devotees.

“Tabo monastery” under the aegis of “Institute of studies in Buddhist philosophy and tribal cultural society” (ISBP&TCS) has been the flag bearer in imparting holistic education to the local population of the area which otherwise were leading an isolated lives all by themselves. SPST (Serkong public school, Tabo) under Kaza block is an English medium schoolup to class X established in the year 1999. The basic aim being to impart education to children from this remote part of our country encompassing a distinct quality, well roundedand modern in its temperamentkeeping in mind their fast dwindling local culture. In 1996 when I visited Tabo monastery with some of my SFF troops en route to Rupa valley in Kinnaur district this school was not yet established. But having known previously in some detail the ‘Institute of Buddhist philosophy& tribal culture studies (ISBP&TCS) under whose aegis this particular school is presently functioning I was bit more than interested to know how the two separate institutes were closely interacting and at the same time maintaining their individual identities.

Serkong public school, Tabo (SPST) lays particular emphasis on children from economically hamstrung families of the Spiti region who otherwise would have been left out of the learning curve owing to financial constraints joining in the bargain millions of such unfortunate unschooled people of our sub-continent. Due to the remote location and problems affected by the harshness of the terrain surrounding it, the school as such is in constant need of funds &resources. I came to know the philanthropic outreach of ISBP&TCS recently only when MrSiddhitTamba a true philanthropist at heart came into my contact.  He got involved with this school while doing his post-graduation in New Zealand in 2013 and chose to complete his research and dissertation from Spiti as its central theme. Siddhit Tamba , a Goanby domicile happen to read my article on “Tibet foods private limited” published from J&K a few weeks back  and wanted to replicate the same in Spiti valley. His getting communicated with me on such a subject which was core to both of our thinking was an act of serendipity. His line of thinking if fructifies on ground will be a big morale booster to the general populace of this cold arid high altitude desert.

Siddhit Tamba intends to supplement the income levels of the area from where these school children come by way of “community based social entrepreneurship” to solve the problems of economic hardships in a local milieu. Reverting back to my main theme of the write up, of resurgence of Serkong Public school, Taboit has been observed that the school often struggles to cope up with its day to day functional needs which results unfortunately into many promising and bright children belonging to the region having left out of the loop of the learning curve. Many of the school children are on a “waiting list” as the school simply doesn’t have the resources to shelter and feed the new aspirants despite desperately wanting to do so. Currently the student population is a sizeable number of 300 attending classes from the LKG to class X.Since the school is a beacon of good quality& modern education in this vast expanse of Himalayan region parents especially from weaker financial backgrounds are eager to enroll their children in Serkong school.

a)      A donor can sponsor a needy child for a year. There are kids who are from a very poor family and have lost one of their parents or both of them (in most cases fathers). For a sum of rupees 12,000/ per year one such child can be supported. This will take care of the needy child’s books for the academic year, a set of uniform and boarding /lodging.

b)      The other way is by sponsoring or donating materials /equipment that the school is in urgent need of such as benches, desks, blackboards, computers, stationery, play kits, teaching aids, lab equipment, books/ novels etc.

Currently as per Mr Siddhit Tamba, to whom I spoke at length on the telephone recently, as on date the school has to make do with  extremely limited resources at their disposal. Most often they are in a very bad shape being worn out due to year on year passing down the same to the junior batches of the students since the inception of the school w.e.f 1999. The school as per Siddhit also has very ambitious plans to expand the hostel wings and construct a few more classrooms to accommodate the ever growing student population, but the fund crunch is proving to be a great dampener. If anyone wants to sponsor a needy child, a photo and the details of that child will be sent to the donor. The child should write to his/her sponsor and the sponsor can also write periodically to the child to enquire about his/her academic progress and generalwell-being.Alternatively if any individual /group/ organization wishes to sponsor some critical equipment such as computers, science lab equipment, or school infra such as hostel wing/ classrooms, the same can be facilitated with the provisioning of a plaque or a name plate to commemorate the generous donation.

Leaving aside nowadays fetish or rather fashion of getting associated with such schools as a veneer of adoption of philanthropic activity, my interest in the Serkong public school was as a result of Déjà vu when I was in the SFF (Special frontier force) on deputation and witness to generous amount of financial help to the TCVs (Tibetan children’s village schools) which were the first point of contact for the Tibetan refugees to put their children to education in a decent set up. I hope Siddhit Tamba and his band of self-styled enthusiasts find their calling in rendering help to these far flung children of India by schooling them in the right perspective. For any philanthropic help the above mentioned gentleman can be contacted on his email /mobile number - siddhit_Tamba@yahoo.co.in/ 9850462427. I am sure with the wide reach of this article in  many  countries/ abroad more genuine philanthropists will queue up to do their bidding to help a genuine human endeavour take to wings.

(The writer is a retired army officer and regular contributor to RK. He can be reached at: slalotra4729@gmail.com)

Box: Serkong public school, Tabo (SPST) lays particular emphasis on children from economically hamstrung families of the Spiti region who otherwise would have been left out of the learning curve owing to financial constraints joining in the bargain millions of such unfortunate unschooled people of our sub-continent