Separated by border, united by birding 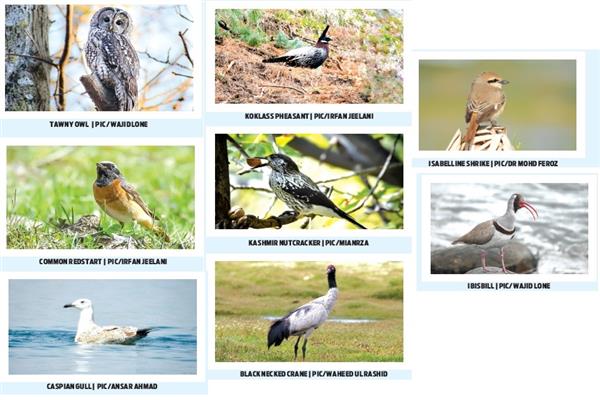 Birdwatching, or birding, once considered a hobby of the elites, refers to observing, recording, or capturing the birds of all breeds, either as a recreational activity or as a form of citizen science. A birdwatcher may observe by using his naked eye or a visual enhancement device. Most birdwatchers pursue this activity for recreational or social reasons, unlike ornithologists, who engage in the study of birds using formal scientific methods.

Birds are the most aesthetically profound organisms on earth, and the aspects of their beauty and splendor have often baffled, or somewhat confused the naturalists and evolutionists since Darwinian times. According to paleontologists, in present times, birds are the closest relatives to Dinosaurs. These factors, and many more, make bird-watching a cherished affair around the world.

Bird-fanciers around the world have developed groups, clubs, and forums to represent their shared passion for bird-watching.

Driven by the same passion for bird-watching, Irfan Jeelani, a disaster management graduate from Kashmir’s Kangan area launched one such club in the year 2020. Currently, the club has some seven thousand members, with one unique specialty that separates it from the rest—it traverses across the borders of nation and state.

While speaking with Rising Kashmir on the genesis of the club, Jeelani said, “Birds of Kashmir started its journey in March 2020 after the lockdown imposed around the world due to outbreak of Covid-19 pandemic, and people started to observe their backyards and balconies for birds.

Though Jammu and Kashmir already had some birding clubs, I

decided to launch a club that could bind people, especially birders, across all political boundaries. Therefore, people from Jammu, Kashmir, Ladakh, Pakistan Administered Kashmir and Gilgit Baltistan were asked to contribute and be a part of the club. The response was so overwhelming that we now have members from all across the western Himalayas, making Birds of Kashmir the first and only club that has members and contributors across all the regions in the western Himalayas.”

The photographers in the club, commonly known as birders, hail from a spectrum of backgrounds. Though a fair share of them look forward to taking photography or bird-guiding as a formal career, some of them come from other professional backgrounds such as teaching, business, journalism, medical, and education. All of them work in their respective native areas and are connected only virtually.

“At the Birds of Kashmir, we have tried to bring birding to the household level, where everyone with a camera or a phone would desire to click pictures of the birds. Previously, birding was considered a hobby of elites only and that perception had to be quelled,” Wajid Lone, a member of the club said.

To a great degree, the club has succeeded in its mission and has inspired a number of photographers in the western Himalayan region to pick up their cameras and venture into the wilderness. It can bring both peace and glory.

“The birding in the Himalayas, especially in Kashmir has enormous scope, the majority of the areas are unexplored so there is every chance that a birder might find something new that can make him a celebrity amongst the birders around the world,” Jeelani adds.

The photographers from the club have captured in frames various rare and precious species that were previously either not recorded or considered endemic to only other regions earning the group worldwide praise and appreciation amongst the birding community.

The Himalayas present a unique habitat for some amazing bird species (Avian-fauna) and there are more than six hundred species of birds found in the range. Kashmir valley, in particular, presents a very diverse and varying species of birds. Circled by a ringlet of jagged mountains, the diversity of the habitats and their innumerous endemic bird species make the valley a special place for birders around the globe.

“Kashmir valley is very rich in Avian-fauna. Nowhere in the Himalayas is such a place with an immense diversity of habitats. We have wetlands, grasslands, mixed deciduous forests, pine forests, alpine Meadows, and whatnot. All these factors make the valley an amazing abode for the variety of birds,” Jeelani adds further.

However, since the members of the club say that there is a substantial lack of research in the birding scenario of the Kashmir valley, by documenting the Avian fauna in-camera clicks, the researchers would have a substantial trail to follow.

In the 1890s, W.R. Lawrence, a British administrator and first settlement commissioner in Jammu and Kashmir commented, “birds have a happy and carefree existence in the country (Kashmir). The Kashmiri knows little about birds, and though he takes considerable interest in the songbirds, he is ignorant of the habits of the feathered kingdom.”

Although Lawrence had said those words a quarter and a century ago, they still hold true. The members of the Birds of Kashmir say that last year when they published their maiden calendar that depicted the pictures and details of the rare and exotic birds that the club had documented, “people were surprised to know that there so many species of birds in the Himalaya, or Kashmir altogether”.

However, not only does Kashmir have a rich variety of endemic avian species, but also, every year, during winters, lakhs of migratory birds from Japan, Siberia, and central Asia throng the wetlands of Kashmir valley and colonize the landscape with beautiful cacophony and color. The members of the club say that Kashmir should capitalize on the bird wealth also and invest effort into the birdwatching sector.

“Bird photo tours is a newly developing trend in sustainable tourism. Since we have abundant avian wealth, we should capitalize on it as well. This will provide ample opportunities for youngsters as well who can work as tour guides in the popular bird habitats like Hokersar, Dachigam, Gulmarg Biosphere reserve, etcetera,” another member of the club suggested.

Though the Avian fauna in the valley is rich and glorious indeed, like all good old things, it too is facing the goliath of its own—illegal poaching.

“Poaching in Kashmir is alarming. The main problem is that poachers know more about the birds than the field staff who are there to protect them. Also, many people take pride in poaching precious birds and parade the killed birds as trophies before everyone. This attitude needs to change,” Jeelani said.

Additionally, the condition of wetlands (a major habitat of the birds in Kashmir) is also in a worrying state.

“We want to work with authorities so that birds and bird habitats could be protected and preserved. This is very important because we are losing some very important birding habitats across the length and breadth of the valley,” Jeelani added while hoping that the government would cooperate in the efforts of his club members based in Kashmir and help them tackle the problems concerning the birds of Kashmir region.

To preserve the bird wealth of Kashmir, Jeelani and his fellow bird-watchers in Kashmir desire to establish a bird rescue center in the valley. They say that they rescue so many birds, but the majority of them end up dying due to a lack of facilities and professionals handling them.

“We have some wonderful endemic birds in Kashmir. It is very important to protect them and the best way to do it is by protecting their habitat and by inviting people to research on them so that we could have more knowledge about them. On an individual level as well, we need to extend love to our birds and protect their habitats,” another member of the Birds of Kashmir added.

Key Photographers of the Club

2.      Irfan Jeelani belongs to Kangan town situated on the banks of river Sindh. He is the founder of Birds of Kashmir and is a passionate Birdwatcher and Traveller.

3.      Iqbal Ali Khan is from Kargil'sDrass area. Besides pursuing a Ph. D, he is working on Birds of Trans-Himalaya, especially the Corvidae family.

4.      Muhammad Babar is from Lahore, Pakistan. He is a self-employed businessman by profession but dedicated and passionate wildlife and nature photographer.

5.      Rao Mudasir Ahmed was born in Lahore Pakistan. He is a hunter-turned photographer and conservationist and contributes photos from Gilgit-Baltistan to the group.

6.      Wajid Lone is the founding member of Birds of Kashmir. Wajid hails from Kashmir's Kangan and is a passionate photographer and blogger.

7.      Subhasis Roy belongs to West Bengal and is an Engineer by profession. He loves music and has captured avian fauna in many Indian states and bird hotspots.

8.      Rommel Mahaldar (Jammu) - A travel entrepreneur & a staunch nature lover, started active birding in 2018. He dreams to help the conservation of wetlands by documenting their ecological importance.