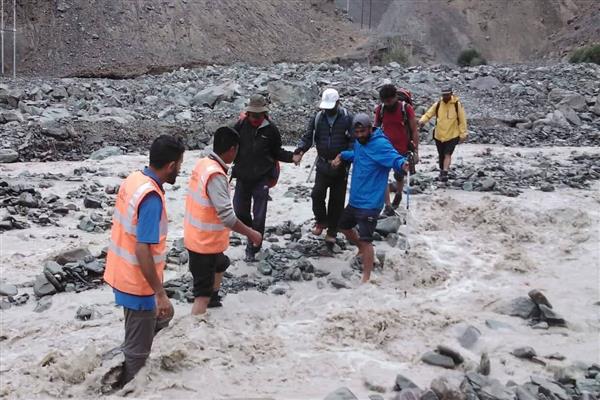 Leh, Aug 01: State Disaster response force Ladakh rescued around 20 trekkers after they got stuck at Rumbek Valley due to heavy rain and a sudden rise in water level.

A Tweet from ADGP Ladakh's office said,“20 trekkers from SAIL were rescued today after strenuous efforts by UT Disaster Response Force, Leh. The rescued party was stuck on Rumbak valley trek due to heavy rainfall and increase in water levels of streams.”

An official said that the rescue team of the UT disaster response force along with locals was promptly rushed to the spot and rescued the trapped persons safely.

Meanwhile, Kargil police also rescued a Nomad family and their herds after they got stuck at Zero pointZojila due to flash floods triggered by the rains.

In a tweet, Kargil police said rescued and shifted Bakkarwals stationed at Zero Point due to Flash floods at midnight and safely shifted their herds and stocks to a safer location near Tunnel Stop.

An official said as soon as the information was received about the Nomad family which were stuck at Zero pointZojila, immediately a rescue operation was launched by Kargil police to rescue the passengers safely.