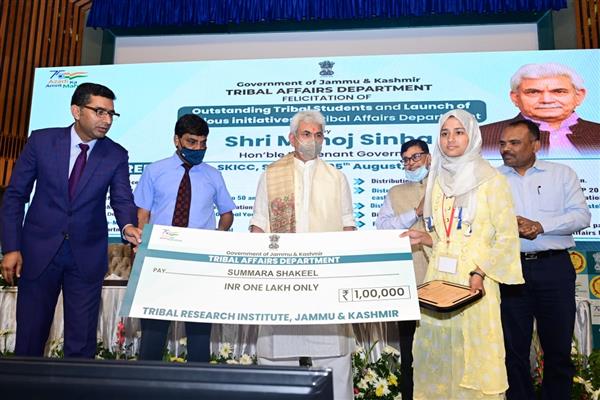 He said this after launching major initiatives with a vision for a prosperous tribal community.

Dedicating new initiatives to the people of tribal community, the Lt Governor said, “The schemes by Tribal Affairs Department will unleash the productive potential of the youth, holistic development of tribal community free from all discrimination, fear and insecurity.”

Expressing gratitude towards Prime Minister Narendra Modi for securing the rights of the tribal community in J&K, the Lt Governor reiterated the government’s commitment to empower the tribal population of J&K who were neglected for decades.

“We are working with a resolve to make the development process holistic, universal and impacting all sections of the society.

“For the first time in the history of J&K, the tribal population is feeling fully integrated, connected with the mainstream of development. For the first time, their voice is being heard and they have been given their due rights,” said the Lt Governor.

The Lt Governor observed that the initiatives launched are part of the continuous endeavours of the government to promote the welfare of tribal community and ensure that the present & future generations of the community have all the facilities which their previous generations were deprived of.

He added that the dedicated focus is being given towards facilitating best education to the new generation of the tribal community.

“We expanded the scope of pre-matric scholarship to 1.5 lakh students and 12,500 children were selected for post-matric scholarship. Rs 50.62 crore worth scholarships are being given for the education of the children of tribal community, which is a big record in itself,” the Lt Governor added.

On the sidelines of the event, the Lt Governor announced the government’s decision of extending various provisions under the Public Services Guarantee Act completely through online mode.

5th August will be celebrated as 'J&K Bhrashtachar Mukti Diwas’, he added.

On the occasion, the Lt Governor inaugurated eight tribal hostels built at a cost of Rs 26 crore and laid the foundation stones for Rs 100 cr worth 25 tribal hostels.

The occasion witnessed the launch of a series of initiatives by the Lt Governor including Coaching programme for NEET/JEE and competitive examinations under TOP 50, Host 50 and Stars 100 schemes.

Apart from this, the top two students have also been felicitated with a cash award of Rs one lakh each. Besides, tablet computers & sports kits were distributed among hostel students. Smart Cards were distributed to Migratory Tribal Population to ensure their smooth seasonal migration.

The Lt Governor also flagged off exposure tour of 200 tribal hostel students to various parts of the country under “Bharat ko Jano” programme which will instill the spirit of ‘Ek Bharat Shreshtha Bharat’ among the tribal youth.

Under initiatives of Host-50 and Top-50, 100 meritorious students of tribal community, including 45 girls will be provided coaching for the first time in Government Empanelled Institutes for NEET/JEE exams, besides scholarship worth Rs.70,000 to Rs.75,000 per year will be given to those who would crack the  competitive examinations.

100 tribal youths aspiring for civil services exams like UPSC and JKAS will get the quality coaching in the reputed institutes under Stars-100 scheme, and the administration will bear the expenses of tuition fees, study material for the talented tribal graduates belonging to poor families.

Moreover, 2000 tribal youths will be trained in formal skill development in different professions, and many such youths who have already taken informal training in any occupation will also be certified.

In yet another important step, pre-matric scholarships for the tribal communities have been on-boarded on the National Scholarship Portal. Now, the scholarship amount will be transferred directly to the accounts of 10,000 tribal students in a completely transparent manner. Besides, we have taken a step forward to encourage sports culture among the tribal youth, said the Lt Governor.

Under the 'Technology Enabled Education Scheme', Tablet computers preloaded with course wise study material distributed to 800 tribal hostel students of 10th, 12th and PG will prove to be an important factor in promoting digital literacy among the youth of the tribal community, it was informed.

A video clip on reformative measures taken by the government for students of tribal population of J&K was displayed on the occasion, besides the testimonials of several tribal children expressing their feelings after benefiting from various initiatives dedicated to children of tribal community.

Besides handing over cash prizes and felicitating meritorious students belonging to tribal community of J&K UT and providing them Laptops, Tablet computers and sports kits, the Lt Governor also felicitated the wardens of tribal hostels for their continuous support to students in their education journey.

Dr Arun Kumar Mehta, Chief Secretary while speaking on the occasion said that the Government is taking dedicated steps and initiatives for tribal people. The laptop and tablets provided to students would make them able to script a bright future with their hardwork and determination, he added.

Dr Shahid Iqbal Choudhary, Secretary to the Government, Tribal Affairs Department, in his welcome address gave details of the inauguration of various major initiatives for the tribal community of J&K.