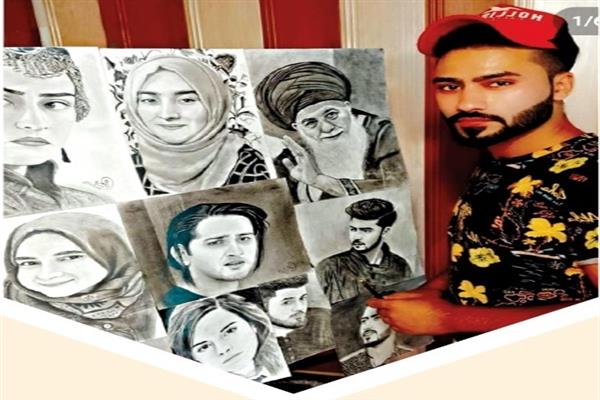 After spending most of his childhood scribbling on scrap paper, a few years ago Sahil Imtiyaz Mirstarted taking drawing seriously, so that his art could give him a unique identity in society.

Born and brought in Kawdara area of Downtown in Srinagar, 26-year-old Sahil  is a budding artist. He completed his bachelor's from Islamia College and has become a sensation on the internet through his unique art.

Sahil told Rising Kashmir that initially he was drawing normal sketches but there was always curiosity in his mind to do some different art. During the covid19 lockdown, he said, “After getting popularly on social media through sketches of popular TV Dirilis: Ertugrul (Resurrection: Ertugrul), I started getting orders from the people for sketches,” Sahil said.

He says earning money was not his motive but had a unique passion for the art and wanted to improve his skills.

From his childhood, Sahil was inclined towards art and used to make different drawingsand paintings.

Inspired by a Chinese shadow artist, who was using ball pens to create shadow art of cups, jugs, boxes, and other things, Sahil was more inclined toward this art and wanted to add a human angle to it.

“I started working on the project and used hundreds of pencils. It took me 15-20 days to complete the Alama Iqbal project. It was more difficult as compared to previous works,” he said.

Sahil says it was widely appreciated by people across Kashmir. His curiosity did not stop here, and he wanted to explore more things in the art.

Apart from following his passion, the young artist is also helping his family in the business. For artists outside life is important for gaining a wide angle regarding society, he says.

In 2021, a 26-year-old artist made the first human sculpture at his home. “It was more difficult than shadow art. Even people used to laugh but I did not look back,” he said.

Sahil believes that sculpture art has more scope in Kashmir as compared to other forms of art. Over the past 1 year, many schools approached him for making different sculptures, he said.

“Recently I made two sculptures - Hangul and snow bear - in GHSS KotiBagh. I have more passion for my work,” Sahil said adding he is now more interested in sculpture creations.

“Practicing is still the hardest part of learning to draw (or learning anything). It’s hard not only to find the motivation but also guidance on how to practice effectively. It probably doesn’t help that I keep switching mediums,” he said.

Sahil says he still has a long way to go. “I have made progress and enjoyed the journey. Though, I still make mistakes all the time, but they aren’t the same ones I used to make,” he added.

Regarding future plans, Sahil says he is working on a 3D ‘Nail art project’ of Holy Kaba. “It will be the first kind of such art in the Valley. There is some work pending on the project and it will be completed within a few weeks,” he said.