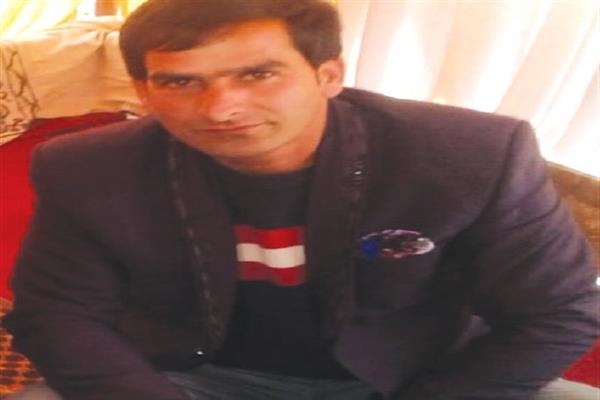 Young author and poet Sagar Nazir from Kunzer Baramulla in northern Kashmir has become a voice for the voiceless by compiling 21 books of unknown, unheard poets of the Valley and brought their work to the limelight.

Sagar was born and brought up in a middle-class family in Chukar village of Pattan and attained fame through his popular poetry over the past decade. In 2019, he won the prestigious Sahitya Akademi Yuva Puraskar for his first book Thaer Angnech - a collection of poetry - in the Kashmiri language category.

He is regarded among the youngest poets, critics, cultural activist, translator, and authors in Kashmir, who is on a mission to promote and preserve the Kashmiri language at every stage.

Sagar has penned down many popular Kashmiri songs which were appreciated by people and are among the list of frequent songs played on All India Radio Srinagar (Radio Kashmir).

He says from his childhood, he used to listen to all programs from Radio Kashmir desperately. “Even I used to send letters to the producers and program directors of Radio Kashmir that contained both criticism as well as appreciation.  With the listening to literary programs on Radio, I got inclined towards Kashmiri language and literature," he said.

In year 2005, Sagar bagged 'Best Listeners Award' at Radio Kashmir, for regularly listening to its programs aimed to promote Kashmiri literature and culture.

“I would often participate in TV and Radio programs where I would read my poems.My love for the Kashmiri language was reflected in poetry. I found that the best expression of my inner voice can only be found in my mother tongue,” he said.

Sagar says, in 2010 he wrote his first Kashmir poem which was widely appreciated. His poetry mainly focuses on Kashmir and its culture, literature.

About his inspiration, Sagar said, he was inspired by the poetry of 18th-centurypoetess popularly known as Arnimal, Habba Khatoon, and 19th-century prominent poet Rasul Mir, who was leading romantic poets of the valley.

The 33-year-old poet says that following less interest in academics, he left the school in 12th class. “It was one of the toughest decisions I made in my life and started writing poetry at my home," he said.

Sagar says inclination towards poetry was God’s gift for him. He continued his poetry from 2010 onward. After three years, he published his first poetry collection Thaer Angnechin 2014. The book focuses on the rich Kashmiri culture, he said.

"This book was my dream project and finally I got Yuva Puruskar by theSahitya Akademi in 2019. After 2013 I did not look back and continued my work," he said.

Sagar says he has also compiled 21 books of unknown poets and brought them in limelight.  Most of those poets were illiterate while some had no one to guide. "It took three years to complete their work. My work provided them a stage and market,' he said.

The response after writing these books was quite encouraging. They were widely appreciated by several literary forums in Kashmir. Critical readers of Kashmiri poetry also gave positive reviews of the collection and praised it.

"Presently more than 60 members are associated with forums across Kashmir. We are promoting the Kashmiri language at every platform and represented Valley in Bangladesh, Assam, Rajasthan, and other places on multiple occasions ," he said.

Sagar says his songs become popular in Kashmir as people appreciated their content on Radio Kashmir. He expressedhis gratitude to prominent Kashmiri singer Aijaz Ahmad Rah, who provided a platform to his poetry.

“The biggest achievement for any poets and writers is when people know them and appreciate their content. People knew Habba Khatoon and Lala Ded by their poetry and not by their faces,” he said.

Sagar says in the future he wants to promote the Kashmiri language and is hopeful that it will be given classical status. The new generation should speak, understand and learn Kashmiri, he said.

"We have conducted several seminars, workshops across colleges and schools in Kashmir for promotion of the language. We will continue to uphold it.

The role of civil societies and local media in advocating the preservation of the mother tongue is important. In reality, very few institutions have been working towards saving the Kashmiri languages,” Sagar said.

He said several cultural institutions including All India Radio-Srinagar, Doordarshan Kendra Srinagar, Cultural Academy, Adbi Markaz-Kamraz Kashmir, and other organizations are doing a great job in promoting the young talent of Kashmir and are working for the upliftment of all languages.

Apart from authoring books, he is planning to release his first Urdu collection of Gazals. He is also an accredited artist at Doordarshan and Radio Kashmir.

In a message to young artists and poets, Sagar says, if someone is in the poetic line, he or she must review more literature and understand its depth. The mother tongue should be given more priority as it can be the biggest contrition to it, he said.

"There is no shortcut to becoming successful. We have to work hard to achieve the feat,' he added.