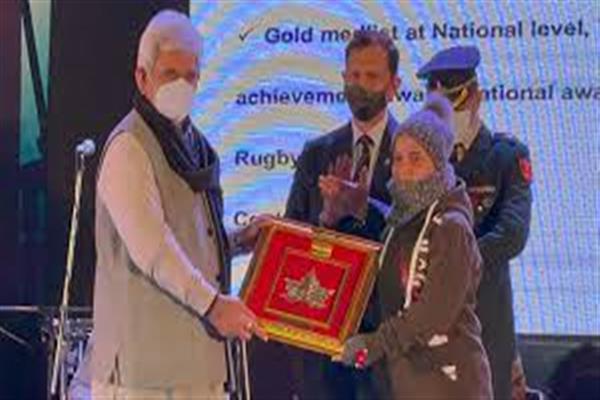 In a place like Kashmir, where even most of the boys might not have even touched a ball of rugby, let alone playing it, a young woman Irtiqa Ayoub from Safakadal area of Srinagar city, has not only become an icon of the game, but is also coaching it to others across the Valley.

The 25-year-old Ayoub is affiliated with the game from the last nine years, and her first connection with the game happened in her teens when she was 16.

Irtiqa has always been fond of sports activities especially football which she even played with boys of her age. Her connection with rugby happened by an accident. It so happened that one-day the physical education teacher in their school introduced the game of rugby to his students including Irtiqa and asked them to play it. Initially, she had her reservations about the game. But being an ardent sports lover, she decided to give the new game a try and in a week’s time, Irtiqa fell for the rough contact sports.

From there on there has been no looking back for her.

After getting so much from the game, Ayoub decided to return something to the game by starting its coaching in schools and colleges across the Valley.

“Along with my training, for the past four years, I am coaching rugby to girls also. I see a lot of enthusiasm and talent in Kashmir. Along with belief in our hard work, we need more resources and sports infrastructure,” says, Ayoub, who recently won the ‘Young Achiever award 2021.’

“I want more women to feel free and join the game. I have been working on guiding and mentoring them,” she says.

Defying odds, her family, particularly her father, has been the pillar of support. “My family has always believed in me, but there has been criticism from some quarters. Like in Kashmir, women can’t stay away from homes, even if going for a tournament. But I think critics are a big part of one's journey as they keep you motivated,” she says.

“Despite hurdles, I haven’t stopped my rugby programmes. My work is being appreciated and supported by the State Sports Council who provided me ground facilities for my training programs. Rugby India too has always appreciated me,” she confesses.

In the same breath, Ayoub says a lot still needs to be done as there is a lack of both resources and awareness when it comes to women in sports. “We don’t have enough facilities where girls can go and practice. There is a lack of awareness in schools. Some private schools have sports facilities but government schools have no such facilities. Schools focus more on class work and studies and forget that sports are an essential part of personality development. It teaches us all about not giving up, how to function as a team and more importantly how to turn our weakness into our strength.” “What makes me proud is that my story has become an inspiration to a lot of young girls from the Valley to pursue sports. Although we are far away from where we should be, it's still a good start,” she says.