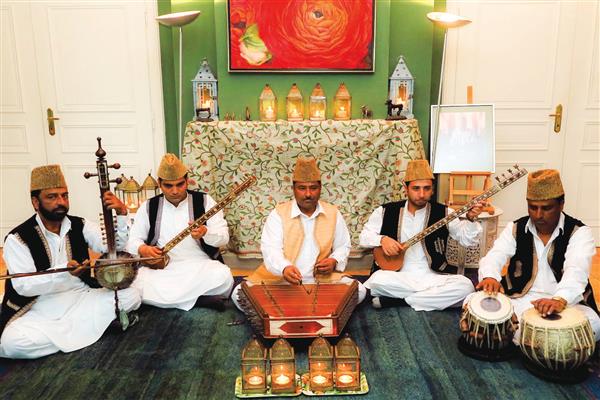 Saaznawaz Gharana, a family in Downtown area of Srinagar is safeguarding Kashmiri Sufiana music and the family’s eighth generation remains well connected to its musical roots.

Kashmir is one of the few regions of India which has a distinct regional classical music tradition along with a rich repertoire of folk and modern light music. The classical music of Kashmir is known as Sufiana Mausiqi. This music is taught orally and passed on from one generation to another.

Mushtaq Ahmad Saaznawaz, who belongs to 7th generation of the Saaznawaz family from Danamazar Safakadal said during the Mughal period, their family ancestor Muhammad Sultan Saaznawaz had migrated to Kashmir.

“That time, our family used to perform in public meetings of Mughal kings. Till date, we are keeping this trend alive. We have kept the music the same as trained by our ancestors. There is no change at all,” he said.

Ghulam Muhammad Saznawaz was a great Sufiyana music maestro who was conferred with lifetime awards that include Padma shri and Sher-e-Kashmir awards. He was the first Kashmiri Sufiyana musician to receive the award. He died in February 2015.

Mushtaq believes that music brings love into the air and makes people feel more connected and creates memories that will last for lifetime.

“Sufi music has the capacity to cure ailments of heart and head. It is the simple way to realize Allah,” he said

“We are training our children now so that they continue this family legacy to the next generation. We have kept it the same as we learned from our ancestors,” said Mushtaq.

He has participated in hundreds of musical programs organized by Doordarshan Kendra Srinagar, All India Radio, J&K Academy of Art Culture and Languages, and Sangeet Natak Academy, New Delhi.

Apart from regional and local media, Mushtaq has performed in the music festival Jashn-e-Aman in New Delhi through the Department of Information and Public Relations.

Over the past several years, he said, there has been no change except in Iranian content that is being replaced with Kashmir poetry in a similar way as he has learned.

To keep the traditional old music alive, some artists have started training youths by setting up their own institutions where they provide free-of-cost training.

The family runs Saaznawaz Training Institute which provides free training to students and musical instruments and food to students who want to learn Sufiana music.

The institute has enrolled more than a dozen students including children from their own family who they believe would carry forward the legacy.

Sufiana music has Maqam like Ragas in Indian Classical Music. There are 12 Maqams in Sufiana music which are divided into 2 branches which further gets divided and becomes 160 Maqams.

Shabir Ahmad Shaznawaz (title Ustad), brother of Mushtaq, believes that Sufiana music is an integral part of the rich cultural and musical heritage of Kashmir.

“Over the past several decades, there are not many practitioners of the art form anymore," he said.

Shabir received early training through his father Ustad Ghulam Mohammad Saaznawaz and is capable of playing all the instruments used in this music, especially Santoor.

He has also been conferred with Ustad Bismillah Khan Yuva Purskar in the year 2008-09 and Ustad Shaikh Abdul Aziz Memorial award 2012 for young and promising artists. In 2010, he received the Shashrang award from Kashmir Music Club.

“In 2015, we got success for Sufiana music in the Valley as the Sufiana Santoor Department was introduced at University of Kashmir, where students are learning and getting trained,” he said.

“Unfortunately, after completing their degrees and proper training at the department, there is no scope for those students or any job at the government level,” Shabir said.

He said despite repeated assurances the government has failed to introduce at the College level and nothing is being done for the same at ground level.

The veteran music teacher said outside Kashmir, there are permanent posts in Indian classical music in various departments including tabla artists, vocalists, harmonium artists, etc. but there is no such concept here.

“I have performed at international music festivals in Paris and Lyon (France), Geneva (Switzerland), and various other parts of Europe including Switzerland,” he said.

Shabir has sung at national and international platforms. He has also participated in various Sufi festivals organized by the Indian Council of Cultural Relations (ICCR).

“Sufi musicians lately introduced local poetry as lyrics in their performances as the Persian lyrics, which were originally used for such performances are difficult to understand,” he said.

Shabir said the foremost responsibility on part of the government is to formulate a proper cultural policy for the promotion and propagation of traditional music.

“Moreover, training in Sufiana Mausiqi should be imparted in all the schools and colleges of Kashmir. It should be made a part of the curriculum in educational institutions,” he said.

Shabir believes that there should be a provision of financial assistance and maintenance grants to artists so that they earn their livelihood and be able to pay full attention to the art form.

He also suggests that the government should provide scholarships to students interested in learning Sufiana as it is not possible for musicians to teach without any financial support.

“The language of music is universal and it connects souls and cuts barriers. To my mind, sound is the purest form of music, uncorrupted and unburdened by any extraneous elements,” he said.

Muhammad is capable of playing Tabla and Santoor and has been approved by music audition board of New Delhi as a B-Grade Artist.

Qaisar Mushtaq Saaznawaz is the youngest and belongs to the 8th generation of the Saaznawaz family. He said that his ancestors were the first one who introduced music from Persia to Kashmir and continues to carry forward the legacy.

“Ustad Sultan Joo was our ancestor who got the treasure in our family and now this treasure has been handed over to us,” he said.

Many of his performances are with his grandfather and he feels proud about that.

Talking about the music, he said that it originated in Iran. In Kashmir, there was Sufism at that time and the people accepted it.

“It was believed that the language people used then was Persian. The medium of the music was Persian so people appreciated and adopted this. The music was played in the events and marriages,” he said.

With time the language was changed which had an influence on the music and gradually the music began to decline.

“People don’t understand it as it is in Persia. We have added Kashmiri poetry, Urdu poetry so that people understand it and its artists should get the platform to showcase their skills,” Qaisar said.