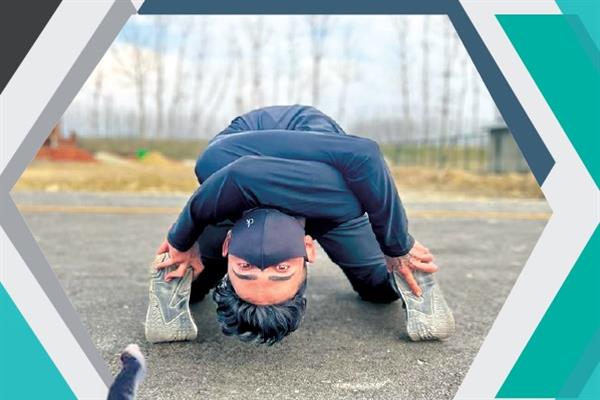 Sayim Hyder has an incredible flexible body. He bends and twists his body into unbelievable shapes and for this talent he is locally known as the rubber boy of Kashmir.

Hailing from the Shadipora area of North Kashmir’s Bandipora District, 23 year old Sayimis a contortionist. He has skilled some truly amazing feats of flexibility, including the ability to rotate his head 180 degrees.

When he twists and turns his body parts, it looks like there are no bones in his body to obstruct him. He can also dislocate himself from both his shoulders. His body is so elastic that he can rotate his body 180 degrees backward, while he can also rotate each of the hands more than 360 degrees.

Sayim is also blessed with his smart front bending skill, as he can rotate his legs at 360 degrees and crawl like a snake as well. His body movements look like optical illusions. Apart from this, he can also fit his body in a box. His flexibility and body-bending skills are unbelievable which has astonished people in the valley.

The rubber boy has gained massive attention through social media. He started creating content and uploaded it on his social media accounts, his content is loved by everyone and people around him wonder at his flexibility. He has more than 15k followers on Instagram and is known as ‘Popping Sam’ on social media.

Sayim did not go to any sports academy or have a personal coach to help him practice but surprisingly he is completely self-taught, he discovered his passion when he was just 11 years old.

In 2010, he started stretching his body, and it has been twelve years since he is doing it. He has been inspired by just watching videos online. “When i was 11 years old, i came across videos of performers bending and twisting their bodies on the internet andi thought that i can also do it and started self learning,” Sayim said.

“Initially, I tried arm contractions, when I tried arm contraction for the first time, it took me a day to learn that and after many tries when I finally did that my right arm got fractured but I didn't give up and followed up with consistent training and practice and now I don't feel any discomfort or pain while stretching,” he said adding“I have made it a hobby and I know how to control my body and protect myself from injury. After doing the arm contractions I developed an eagerness to try other contractions as well.”

In 2019, after completing his secondary education, Sayim was selected as a dance and yoga instructor at Spark academy in Bantalab Jammu, where he taught dancing, yoga, contractions and bone-breaking for a year and then left because of the ongoing Covid19 pandemic.

‘’Dancing is what I could say a passion for me and this passion began in me when I was a kid, I used to watch many videos of famous hip hop dancers on YouTube and then I used to make videos of myself, practising the same. One step leads to the next, and here I am today doing what I always wanted to do, it's as of living my dream. I carry all the hopes with me that one day I will be on the national platform to express myself,” he said.

Sayim has been showered with various accolades from people that made him work more on his talent. He has received many awards locally and nationally and he dreams of representing himself in the reality television series India’s Got Talent. He is also aspiring to register his name in the Guinness Book of Records- an achievement he is hoping to achieve soon.

“My friends, cousins and even the kids in my locality come to me and ask me to teach them these skills. I remember once a friend insisted me to teach him the bone-breaking and when he tried he couldn't do it and got some severe injuries’. It's not everyone’s cup of tea to learn bone-breaking, you can only do it if your body is enough flexible,” said Sayim.

At this young age, Sayim is getting various offers from the film industry. “I received an offer to work in a horror movie in which I have got the role of a ‘Zombie’ and I am super excited for that. I also got multiple offers from various advertising agencies and brands to work with them.I also get phone calls from famous models and actors for the photoshoots,”he said.

When asked about how did his family react when he started practising it, he replied “At first my parents were worried and showed no interest in me pursue my talent of contorting but soon they realised that I am enough capable of these things and now they always support, encourage and motivate me to achieve the best which keeps me going and I know one day I will make my parents and the whole Kashmir proud’’