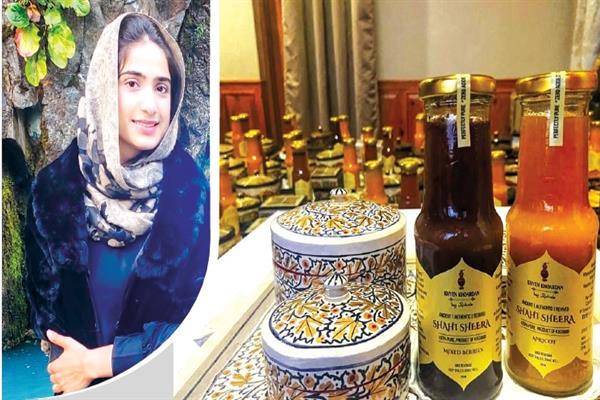 Inclined towards Kashmiri traditional food since childhood, Ruhaab Lateef Mir is on a mission to revive the traditional Kashmiri cuisines. She has revived decades old Kashmiri health drink ‘Shahi Sheera’ and served it in more than 100 weddings last year.

Hailing from Khanyar area of Srinagar, Ruhaab is an environmental advocate by profession and a proud owner of her food unit “Khyen Khoardan by Ruhaab".

Since her childhood, she had a passion for cooking Kashmiri cuisines. “I was inclined and attracted towards Kashmiri tradition and food but with time, I kept experimenting and learning traditional recipes more, I felt the need to revive our traditional cuisine which I realized was lost,” Ruhaab said.

During her studies, in 2018, there was a food festival at Kashmir University. “All the restaurants were invited to participate in the mega event and I too registered my name. That time I thought of preparing some cuisine at home,” she said.

Ruhaab said she wanted to serve unique things in the festival, which would grab the attention of all. At our home, we used to make Sheera drink made from apricots. It was being prepared at our home for decades and I asked my mother that I will serve Sheera in the festival,” she said.

Then, she started researching about ingredients of Sheera and tried to trace the historical background and its origin from elders in her family.

“From my grandparents, I came to know that in Downtown, the traditional Unani doctors or Hakeems would use it as a medicine due to its health benefits. It was highly recommended for blood purification and other health-related issues,” she said.

Ruhaab says she also came to know that Sheera was used in Kashmiri weddings in 1960-70s. Even in the television film Arnimaal, released in 1982–83 by Siraj Qureshi in Kashmir, Shahi Sheera is being served to guests and has its roots with the Kashmiri culture.

“After the hectic research part, finally my mother and I prepared the Sheera for 200-300 people for the KU food festival. Before that, I had already completed the sampling of the products; what amount ingredients should be added and how it will be served among all age groups,” she said.

Ruhaab says the experiment was very good and it was appreciated by all the guests, students, staff members present at the festival. That time I had no intentions to sell it as a product in the market, she said.

“It was a successful event which boosted my confidence and after that, I thought I will revive this traditional Kashmiri drink for my own people. It will be my small contribution to the society,” Ruhaab said.

This event was followed by another mega food festival event at Sher-i-Kashmir International Convention Centre (SKICC) in 2019. “Again I kept this Sheera in my collection. Apart from apricot flavor, this time mixed berry flavor was added to the list, which was totally in a different color. Traditional Masala Chout was also included in the list. I kept its name ‘Kheyen Khordan by Ruhaab’,” she said.

This time she had invited people from the judiciary who appreciated her preparations and advised her to continue her passion. It was out of box idea and her aim that time was only to aware people of the same.

After completing her course from the Kashmir University, she focused on cooking Kashmiri traditional Kashmiri dishes. “I used to spend time with my grandmother who acted as my mentor and always helped in my ideas,” she said.

After two successful events, her confidence was at the top as people liked it. Even when her sister was engaged, Ruhaab served the Sheera drink instead of market juice to all the guests and it was the turning point of her journey.

“That time I decided that this is going to be a new product and I will work on it. After that I started planning and the execution part. Then completed its paperwork and registration,” she said.

Ruhaab says it was in 2020 when her cousin was married and she offered that she will serve her juice in the event for special guests. She had enough confidence in Ruhaab and gave a nod to her proposal.

“When a local event manager came to know about this Shahi Sheera drink, he liked its sugar-free unique taste and ordered 1000 bottles for his upcoming wedding event and signed a deal with me,” she said adding that it was the last wedding where she personally served it.

Ruhaab says that in 2021, the ancient Kashmiri juice beverage was served in more than 100 weddings across the Valley. It was done without any marketing.

“Even in my own marriage, Shahi Sheera was served among all the guests,” Ruhaab said.

She said apricots for the Shahi Sheera are being transported from Kargil, which is famous for its apricot production across the region. Apricots are packed with vitamins but low on calories, Yakpha Karpo (as these apricots are known) is also rich in Sorbitol – a natural glucose substitute that can be consumed by diabetic patients, Rubaat said.

She started running her small-scale unit in 2018 along with family members including Shamshada Jan, Lateef Ahmad Mir, Murtaza, Naveed,  Azra, and Aquib. Also, five more employees are working in the unit.

Ruhaab said, “Shahi Sheera’ is served in 4 different varieties including Apricot, Redberry, blackberry and mixed berry. Since the drink has all the health benefits, a unique taste and an affordable price makes it fit for the international market.”

The young entrepreneur has recently joined ITI Srinagar and is perusing Food Processing course through which she is learning how to do things properly, so that she will have knowledge of all things in the future.

Apart from Shahi Sheera, she introduced another item, Murabba Behi (Quince jam) which is made with the ancient traditional recipes without adding preservatives, colors, or flavors to it.

“For the Quince, I had to search growers, who are still growing it in their apple orchards. We get it locally and its production is very less. It was almost getting vanished from the Valley. Initially, we had less production but it was successful attempt,” she said.

“My aim is to introduce ancient and authentic Kashmiri cultural cuisine and export them throughout the world, for which, I am preparing for largest manufacturing unit in the Valley,” Ruhaab said.

She says there are many other products in the queue which will be introduced soon. Currently, the unit is being run online only but she is planning to open the first physical outlet in Valley.

Ruhaab says that in the recent Dubai 2020 Expo, She had sent her two products to be displayed in the event.

Last year, She was married in Bagh Mehtab area of Srinagar and Ruhaab says her husband and in-laws supported this initiative and extended their support to her activities.

About her future plans, Ruhaab says she wants to construct a proper unit wherein all the things would be done under a single roof.

“My aim is that our product should survive in the market and generate employment for the youth of the Valley and I hope that people of Valley will appreciate my small initiative,” she added.