Dr Zaira’s book presents, very beautifully and eloquently, a critical analysis of Western Feminism as well as the Islamic stance on gender equality and women empowerment 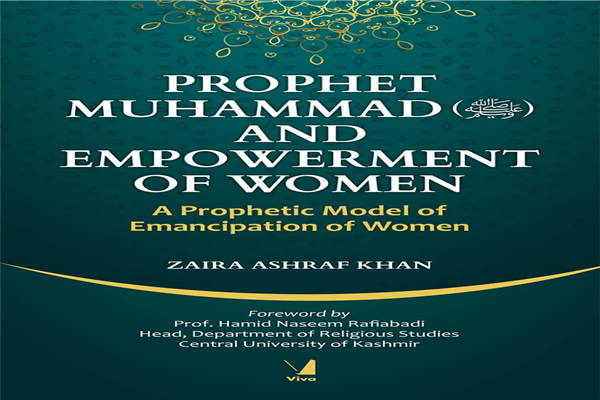 Professor Alexander Knsyh, in his Islam in Historical Perspective (Routledge, 2017), has devoted a full chapter to the “Women in Islamic Societies” (pp. 323-340). Describing it as a “Controversial Topic” (p. 323), Knysh begins this chapter with this statement: “With the possible exception of so-called Islamic terrorism, it is difficult to find a subject that has generated more controversy in the modern Western media and public discourse than the status of women in Islamic societies” (p. 323). Though Knysh is not the first scholar to make such a claim, however, his statement clearly reveals the intricacies associated with this subject. In the backdrop of this statement, it is not an exaggeration to assert that ‘Women Empowerment in Islam’ is one of the crucial and controversial debated topics/ issues in the 21st century and many (Muslim) scholars have contributed in their own ways to address this issue and the complexities associated with this discourse. A latest addition to this discourse is ‘Prophet Muhammad and Empowerment of Women—A Prophetic Model of Emancipation of Women’ (authored) by Dr Zaira Ashraf Khan (a young researcher/ academic from Srinagar who is working, sine 2016, as an Assistant Professor of Islamic Studies in J&K’s Higher Education Department).

Published by Viva Books (New Delhi), Khan’s book is a modest effort in presenting a genuine and authentic picture of women emancipation in the light of Islamic Text and Tradition, while not overlooking to provide a critical analysis and evaluation of the Western ‘Feminist Movement’/ Feminism’. In her own words, this book attempts to evaluate: (i) critically “the theories of Feminist movement and their assumptions on religion being one of the central reasons for the deplorable condition of women, particularly in Islam“, and (ii) how Prophet Muhammad (pbuh) championed the cause of women empowerment and transformed the entire society in a span of 23 years” and what strategies he followed and the role he played in uplifting women (p. xvii). In other words, the book presents a comparative study of two women empowerment movements (of East and West launched in 6th Century CE and 16th CE, respectively) ‘aimed at the common goal of emancipating women and granting them the rights towards leading a dignified life’ by highlighting ‘the practical approach of Prophet Muhammad (pbuh) in curbing the gender disparity and narrowing the gender gap in the Arabian Society’ and by analysing and evaluating critically the ‘various theories of feminist movement’ and of ‘feminist theorists on the religion of Islam’.

The book is an outcome of author’s PhD dissertation (pursued at Shah-i-Hamdan Institute of Islamic Studies, University of Kashmir) and consists of six (6) chapters, excluding Acknowledgements, Introduction, Conclusion and Bibliography. It spans over 120 pages and has a Foreword (pp. ix-xi) by Prof. Hamid Naseem Rafiabadi (Central University of Kashmir) and an ‘Endorsement’ by Prof. Abdur Raheem Kidwai (Aligarh Muslim University). In his Foreword, Prof. Rafiabadi (author’s PhD Supervisor) contextualises the discourse of “women empowerment” vis-à-vis Islam, its Text, Tradition and history and appreciates, in high terms, the efforts of the author by calling her work “a commendable” and a “well researched book” (pp. x, xi). Similarly Prof. Kidwai has highly praised this work “for its insightful coverage of all the relevant aspects of Gender justice in Islam with a particular reference to the sayings and actions of Prophet Muhammad (pbuh)”.

In the “Introduction”, Dr Khan not only contextualises the process of, and the movements associated with, the ‘Women Empowerment’ but also highlights how “Muslim women have been depicted as subjugated section of society” and how Islam and its Text and its Prophet (the Qur’an and Prophetic Traditions, Ahadith), have been “questioned, criticised and debated” by the feminists (p. xvi). She also refers to the Sirah literature (works on the various facets of noble life of the last Prophet) and the lack of significant works on women empowerment vis-à-vis Sirah literature, and thus finding ways to highlight the uniqueness of her work.

First chapter, “Women Empowerment—A General Perspective” (pp. 1-10) looks into the concept of empowerment from the feminist perspective, locates the historical inception of the idea of women empowerment, and contextualises the ‘Feminist Movement’ by probing into its various phases. Second chapter, “Women’s Liberation Theories and Some Prominent Feminist Theorists” (pp. 11-20) discusses very briefly various liberation theories—like the Liberal, Existentialist, Radical, Socialist, and Cultural Feminism—that developed over a period of three centuries in the West “in the cause of Women Empowerment”—a movement which had “many narratives” and “each narrative took shape of a distinct theory” (p. 11).

Third chapter, “Qur’anic Archetype of Women: A Study of Prophetic Times” (pp. 22-40) deals with the subject of women and gender relations as highlighted in the Qur’anic injunctions and discusses “the spiritual, social, educational, economical, legal and moral rights of women (in Islamic tradition)” (p. 21). Laced with Qur’anic verses and the wisdom hidden in them, this chapter highlights the real picture of women—her status, her rights, and her place—in Islam. This theoretical outlook of women empowerment is further discussed in fourth chapter, “Prophet Muhammad (pbuh) and Empowerment of Women” (pp. 41-70), which aims to explore “the course of empowerment of women as brought forth by Prophet Muhammad (pbuh) over a span of 23 years” in the 7th century Arabian society—“a typical male dominated society” (p. 41). The chapter depicts the “Status of Women in Islam” through the Prophetic Narrations (Ahadith) “in praise of women, narrations upholding the honor of women and their identity, reprimanding men about them, narrations encouraging women towards a productive life” and other such aspects (p. 43).

Fifth chapter, “A Continued Legacy of Women Empowerment in Islamic Tradition” (pp. 71-84)—as clearly evident from the title—evaluates the overall reformation that Arabian society was undergoing by providing an account of “vibrancy and participation of women in the Muslim societies from 6th-12th century, seeds of which were implanted by Prophet Muhammad (pbuh) and ardently followed by the Muslims” (p. 83). The chapter documents the names and contribution of various female scholars in different eras and in different fields and substantiates arguments such as “Women right from the Prophetic times were active and had strong presence in all intellectual and religious debates” (p. 82).

Sixth chapter, “Gender Relations in Islam: A Textual (Nasus) Study” (pp. 85-90), provides a description of gender relations vis-à-vis Islamic texts; i.e., it throws light on the “gender relations as endorsed by divine injunctions of the religion of Islam from the Qur’anic perspective” (p. 85) under three (3) headings: “Qur’anic Dictum on Gender relations”, “Qur’anic View on Gender Equality and Gender Identicality”, and “Islam: Promotion of Coexistence, not Confrontation”. From these Qur’anic injunctions, Dr Khan confers that the crimes like “domestic violence and female infanticide [which] are prevalent in the Muslim societies” and the “cases of violence and oppression” executed on Muslim women, “contradicts the teachings of Islam and misrepresents divine commandments based on justice and equality which must be rectified by revisiting the pristine essence of Islamic injunctions” (p. 89).

Thus, the book discusses “two significant movements dedicated to the empowerment of women” (p. 91)—one from the East (beginning in 6th century Arabia) and another from West (beginning in 16th century)—and ends with 5-pages ‘Conclusion’ (pp. 91-95) wherein the author highlights the (dis)similarities between these ‘two women liberation movements’. The author contends that both were similar in the sense that thy fought “for equal rights of women vis-à-vis men in all social, economic, marital, educational, political, existential domains” (pp. 93-94); however, Islamic prototype of women empowerment had certain distinctive features, viz., it brought forth a “balanced society that does not lead to any sort of gender clash or confrontation”; it didn’t restricted the “domain of empowerment ... but rather stands for the sanctity of women”; it neither denigrated women contribution in private sphere nor undermined her contribution in public arena; and, most importantly, it “never competed for identicality with men” (p. 94).

Thus, through her meticulous analysis, keen efforts, and well documentation, Dr Zaira presents a critical evaluation and assessment of western women liberation movement as well as presents the Islamic stance on gender equality and women empowerment very comprehensively. In sum, Prophet Muhammad (pbuh) and Empowerment of Women is a must-read for everyone interested in knowing (the intricacies of) this subject.