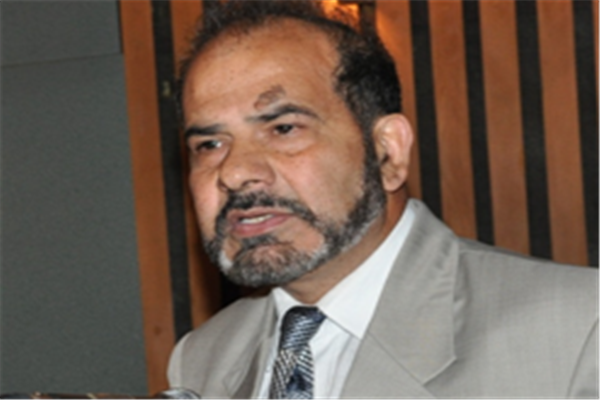 The holy Mosque Shrine of most Revered Imam e Azam Hazrat Abu Hanifa Al Nauman ibn e Sabit is one of the most Prominent and significant Sunni mosques in Baghdad, Iraq. Hazrat  Abu Hanifah al-Nu'man, the founder of the Hanafi madhhab is followed  and revered by billions of  people all around  the world . He was first Imam  of such spiritual calibre who collected  most authentic 500 Hadith in shape of Masnand Sharief of the Great  prophet (SAW) by personally interacting with those who were alive during great era of the Great prophet (SAW). He met the close relations of his companions by travelling from place to place eight decades after the Great Prophet (SAW) transcended back from this world to Arash universe of eternity. Great prophet (SAW) is Hayaat the Noor, light of divinity which attained perpetual existence as pure Noor, which led to creation of entire universe by Allah (SWT) only for the love of Great Prophet.

The school of Islamic religious jurisprudence introduced by Imam e Azam as most reliable Madhab or Fiqa presented Islam as embodiment of love and human unity. Imam Azam was non Arab scholar having his ancestral connection with Persia but he underscored in most convincing manner through Fiqa Hanafi how great prophet (SAW) believed that there is no difference between Arab and non Arabs. This was a time when under Umayyad rule non Arabs were being called as Mawalies and non Arab language or non Arab traditions being abhorred as unislamic. However Hazrat Abu Hanifa emphasised on Uruf which means adoption of all other non arab civilization traditions as part of Islam when they do believe in Allah (SWT), Great prophet (SAW) as his true and last Messenger. He believed solution of all complex problems through Ijma consensus. He collected authentic research material how spirituality and mystic powers have its significance in Islam.

He made people to realize that Great Prophet (SAW) during his life time  emphasised that  the best way of adhering true paths  Islam was by understanding each Ayaat {Verse} of Quran in its true spirit. He researched how Great Prophet (SAW) would offer Fateh at the graves of his loved one’s. He emphasised that five times prayers as taught by great prophet (SAW) are spiritually important for all Muslims. His voyage and hard struggle to collect authentic Hadith by personally talking to the persons who were primary or secondry evidences of such Hadith was primary aimed to discourage those who would later on during subsequent centuries misquote great prophet which may create dissension in thoughts and perceptions. It is because of this divine research only five Fiqa of Islam are being considered most authentic as their researches have been conducted by most reliable Imam’s within one hundred years after departure of great prophet to Arash.

This is the main reason that any Hadith researched and created after several subsequent centuries are being called Week or unauthentic quotes having no basis in basic authentic research coinciding with the period which is nearer to the time of great prophet era. In this process only Fiqa Hanafi,Fiqa Shafi, Fiqa , Humbli, Fiqa Maliki among Sunnies and Fiqa Jaffari among muslims have attained status of authenticity. Later on which ever schools came in to existence from 1700 CE till date are not considered Fiqa but Firqa and their number is touching more than 72 now but those who believe in unity and love give preference by referring five reliable Fiqa rather than coming under influences of misquoted and unauthentic versions of these 72 Firqa’s which came in to existence after fall of Ottoman Empire with support of yarusalm and British powers.

Since this Article is aimed to present importance of the Mosque & Shrine of Hazrat Abu Hanifa in northern Baghdad, which is named after Abu Hanifa's reverential epithet Al-imam al-a??am ("The Great Leader") therefore I will enlighten my readers about the Mosque shrine and brief background of Great personality of Islamic world worried inside shrine.

The main hall is a great rectangular hall with an area of 578 square metres (6,220 sq ft). It consists of eight marble pillars with a large dome on top of them with iron chains hanging from them to hold the chandeliers, with three other domes built around it on three rectangular pillars made of stone and plaster. The dome of the main hall is decorated gorgeous trappings and writings of Al-Baqara and description how this great imam sacrificed his life inside prison cell to flutter the flag of his Fiqa ideology than compromise on Islamic principles of love and unity.

Imam Azam Abu Hanifa (RA) during his young age when he learned Islamic jurisprudence under guidance of Imam e Jaffar ul Sadiq (AS), he was obsessed with spiritual knowledge. It was the most horrible and terror period of yazeed ibne Mawya, Symbol of conflict and Conspiracy of Marwan era and their decedents who had established Islamic state of Iraq and Syria with their capital in Damasqas in the name of Umayyad caliphate. From his childhood Hazrat Abu Hanifa disdained the Umayyad caliphat and its hate ideologies. He was forced by last Umayyad Calipha Marwaan second to take over as chief priest under sovereignty of Umayyad in Kofa which he rejected and was imprisoned. He was tortured by calipha for disobeying his orders.

Abu Muslim of khurasan who was non Arab and closely influenced by Hazrat Abu Hanifa jurisprudence of Islam revolted against Umayyad caliphat. He brought last Calipha of Umayyad Marwaan second to justice and Umayyad caliphat collapsed before bravery of Hazrat Abu Muslim the proud Hanafi general of the time. He on advise of Hazrat Abu Hanifa installed noble personality belonging to Hashmi leanage, Hazrat  Al Safa as first   callipha  of  Abbasayed .He proved very noble calipha who gave full respect to both Sunni  Imam  Azam Abu Hanifa and Shia Imam Hazrat Sadiq ul Jaffar. Both of them had compiled Ahadees mubark of great Prophet (SAW) from their own connectivity’s with Sahaba’s , Tabiya’s and Taba Taibaan’s . They conducted researches to include and approve only authentic Hadith. The schools opened by them where they presented respective jurisprudences received equal acclaim by Abbasid caliphat. However after death of Calipha Al Safa, his brother Abu Jafar Mansur who was born from barber lady played very mischievous  role not only against Abu Muslim who installed Abbasid  dynasty but also against Hazrat Abu Hanifa Imam e Azam  (RA) as well as Imam e  Sadiq ul Jaffar AS. He through conspiracy and deceit beheaded Abu Muslim’s brave general of khurasan by inviting him to his palace. Similarly under similar conspiracy Caliph Abu Ja'far al-Mansur offered Abu Hanifa to be Qadi al-qudat, chief judge to issue Futwa about justification of killing of Abu Muslim by Abu Mansur caliph & to make fatwas allowing caliph to expand the caliph's authority similar to Umayyad. However Imam Azam refused, which caused him being tortured and put in prison. He was lashed 110 lashes daily. .

Great Imam e Azam Abu Hanifa (RA) was martyred inside prison cell after unbearable torture inflicted on him by Abu Mansur, second caliph of Abbasid  and poisoning him simultaneously  in 150 AH / 767 CE in Baghdad. He was buried in al-Khayzuran Cemetery, named after al-Khayzuran bint Atta that was buried in it.

The only dark part of Abbasid caliphate was era of condemned Abu Mansur who ruled for 23 years and during his dark era no one was allowed to visit his Holy Shrine. When Abu Mansur died of painful disease rather than attending Abu Mansur funereal entire population of Baghdad assembled around holy shrine of Imam e Azam .The locks of Mosque were opened and followers of Abu Hanifa from Makah and Madina attended his funeral, twenty three years after his Martyrdom. Historical estimates are that daily around 50,000 would attended  his  grave including new  caliph  who took over Islamic Mamluk after death of Abbasid caliph  Abu Mansur  who secretly was  ideologue of Umayyad. With his death traces of all ideologies of Umayyad dynasty of Islamic state of Iraq and Syria vanished forever. The follower of Abu Hanifa built new shrine around the buriel place of great imam and also small mosque for prayers near the shrine. The concept of Khankah having Roza sharief of Saint and Mosque together is obviously explicit at this place.

During the Buwayhid rule of the Abbasid Caliphate, in 375 AH / 985–986 CE, mosque constructed by Hanafi followers was rebuilt as  medium-sized mosque  near Abu Hanifa's tomb, by the orders of Samsam al-Dawla. It was said that Abu Jaafar al-Zammam built a hall inside of the mosque in 379 AH

The Turks were mostly influenced by Hazrat Imam e Azam’s Jurisprudence. Seljuk adopted his Madhab to understand Islam. Accordingly  in 459 AH / 1066 CE, the Grand Vizier of the Seljuk Emperor Alp Arslan, Abu Saad al-Khwarizmi or al-Mustawfi, built a shrine for Abu Hanifa in the mosque, along with a white Dome. Al-Khwarizmi also built a school near the mosque, named the Great Imam School, for teaching the Hanafi madhab. According to Ibn Khallikan, the school was opened on September 22, 1067, therefore, the Great Imam school is the first school in Baghdad. It took four months and a half to build the school (from January 8, 1067 to May 15, 1067).

After the invasion of Baghdad  in 1508, Abu Hanifa mosque and school were destroyed and abolished, however Ottomans  in 1534 led by  Sultan Suleiman  visited the damaged site of the  mosque of Abu Hanifa and ordered to rebuild it and recover all the damages.  Along with recovering the mosque Shrine, they also added new features to it, like a minaret, a hall, a bathroom, from 50 to 140 shops and the dome that they rebuilt was a dome that was never seen like it before. In 1638 a  luxurious dome was built on the mosque. With the administration of Shaykh al-Islam Yahia, the sultan ordered to rebuild the buildings around the mosque and decorate it with strips of gold and silver, decorate the mosque with green wool drapes and expand the upper and lower gates. The mosque became at its greatest during the period of the rule of Sultan Murad IV.

In 1080 AH / 1669 CE, the brother of the vizier, Mohammed Bek Daftary, reconstructed old parts of the mosque and built a hallway in it. In 1090 AH / 1689 CE, Omar Pasha reconstructed the mosque and made its garden one of the most wonderful gardens in Baghdad.  In 1757, during the rule of the Mamluk dynasty in Iraq, the Vali of Baghdad, Suleiman Pasha, renewed the shrine and built a dome and a minaret. In 1217 AH / 1802 CE Suleiman Pasha, rectified shrine structures and reconstructed the old buildings and painted the top of the minaret with gold. In 1288 AH / 1871 CE, the mother of Abdülaziz, Pertevniyal Sultan, vowed when she was sick, that if she got healed, she will rebuild the mosque with her own money, which she did after she got better.

In 1959, after the 1958 Revolution, government gave the construction money to the engineer, Najmuddin Abdullah al-Jumaili to upgrade holy adding ornaments to the dome and covering its walls and ground with alabaster. Decorating the main hall and the hallways with modern lights.

The Tomb chamber located under the main dome, the tomb chamber is a wide room. The Roza Sharief of  Imam e Azam Hazrat  Abu Hanifa is buried in the middle of the room, his grave covered by a wooden Zarih and  jewel bars shinning with divinity .