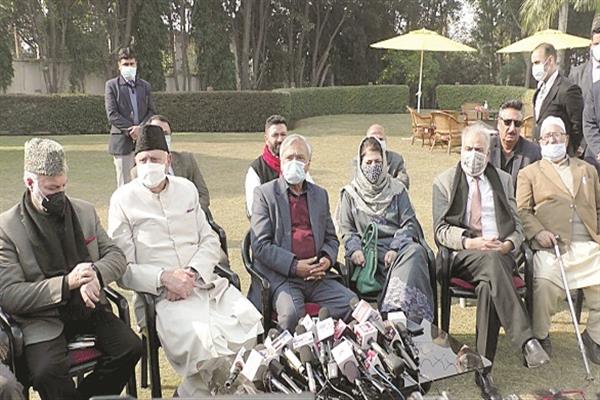 After the Delimitation Commission last year in December proposed to increase six seats for the Jammu division and one for the Kashmir division, besides reserving 16 seats for the Scheduled Caste (SC) and Schedule Tribe (ST) communities in the Union Territory, a move which evoked sharp reactions from the regional mainstream political parties, the commission on Feb 4, 2022 shared a fresh report with its associate members, including three Members of Parliament (MPs) of the National Conference (NC) and two BJP MPs, proposing the redrawing of several assembly segments in Kashmir and one Lok Sabha seat and has sought the suggestions, objections from the associate members by February 14, 2022.

According to the proposal of the Delimitation Commission, it has proposed the addition of six new Assembly seats in Jammu while Kashmir has got one new seat.

Furthermore, several of the Assembly seats in erstwhile Jammu and Kashmir will cease to exist once the draft is approved which include Sangrama, Shangus, Hom Shali Bugh and Habba Kadal.

In Baramulla, the Sangrama and Gulmarg Assembly constituencies have been dissolved and replaced with two new constituencies—Kunzar and Tangmarg.

Habba Kadal, a seat that was seen as a traditional bastion of migrant Kashmiri pandits has also ceased to exist and voters from Habba Kadal will now be part of at least three assembly seats.

Barring Khanyar, Sonwar and Hazratbal Assembly seats in Srinagar district, all other seats have been redrawn and merged with new Assembly seats that have been carved out, including Channapora and South Srinagar, reveals the proposal.

Pulwama, Tral and some areas of Shopian, which formed part of the Anantnag Lok Sabha seat, will now be part of the Srinagar parliamentary seat.

The proposed six more assembly seats in Jammu area, one in each of the districts of Doda, Kathua, Udhampur, Rajouri, Samba, and Kishtwar, has brought the total number of seats in Jammu divisions to 43.

A day after the Delimitation Commission shared its fresh draft report with the Associate Members from the Union Territory of Jammu and Kashmir, the valley based associate members summarily ‘rejected’ the draft working paper and said they will respond to the draft after it’s full review.

Hasnain Masoodi, Lok Sabha MP from Anantnag and an associate member of the panel told Rising Kashmir, “Earlier we responded to the first draft proposal given to us in December which shared the idea of numbers, but now they have gone ahead ignoring our objections. We will respond to the fresh proposal as well.”

Meanwhile, Union Minister Dr. Jitendra Singh stated on Saturday that individuals who are disputing the Delimitation Commission's report must have ulterior reasons.

Dr. Singh told reporters in Jammu that the BJP believes in the validity and integrity of the Delimitation Commission, which was established by the Election Commission of India.

"The commission adheres to certain established norms and parameters, and there can be no variation in the panel's report." Anyone who doubts its operation or the criteria it employs has either not understood the factors that drive its operation or has ulterior objectives”, Dr. Singh said.

Last year in the month of December, the Delimitation Commission proposed seven additional Assembly seats for Jammu and Kashmir — six in Jammu division and one in Kashmir valley. The commission proposed reserving nine seats for Scheduled Tribes (STs) and seven seats were proposed for the Scheduled Caste (SC) community.

Reactions over the Commission’s first report

Former chief minister of Jammu and Kashmir and Vice President of the region's old mainstream political party NC, Omar Abdullah, had expressed dissatisfaction over the draft recommendation of the J&K delimitation commission and said it is unacceptable.

In a tweet Omar Abdullah said, “The draft recommendation of the J&K delimitation commission is unacceptable. The distribution of newly created assembly constituencies with 6 going to Jammu & only 1 to Kashmir is not justified by the data of the 2011 census”.

In another tweet, the he said, “It is deeply disappointing that the commission appears to have allowed the political agenda of the BJP to dictate its recommendations rather than the data which should have been it’s only consideration. Contrary to the promised “scientific approach” it’s a political approach.”

Another former Chief Minister and PDP President Mehbooba Mufti said the "real game plan is to install a government in J&K which will legitimize the illegal & unconstitutional decisions of August 2019".

"My apprehensions about the Delimitation Commission weren't misplaced. They want to pitch people against each other by ignoring the population census & proposing six seats for one region and only one for Kashmir," Mehbooba Mufti tweeted.

"This Commission has been created simply to serve BJPs political interests by dividing people along religious and regional lines," she added.

Peoples Conference President Sajad Lone termed the recommendations of the delimitation commission as, “reek of bias" and “shock for those who believe in democracy”.

“The recommendations of the delimitation commission are totally unacceptable. They reek of bias. What a shock for those who believe in democracy”, Lone tweeted.

While an NC parliamentarian that time had said that the proposal was totally unacceptable.

Soon after the first proposed recommendations by the Delimitation Commission,  People’s Alliance for Gupkar Declaration (PAGD) decided to collectively challenge the report in the Supreme Court.

According to the Election Commission the Delimitation commission’s approvals cannot be questioned in any court of law. While copies of the orders can be laid before the Parliament and the concerned State Legislative Assembly, neither can suggest any modifications or the formation of a new delimitation commission who can make the modifications which looks unlikely to happen.

After the abrogation of J&K’s special status in Aug 2019, on March 6, 2020 the government set up the Delimitation Commission, headed by retired Supreme Court judge Ranjana Prakash Desai, which was tasked with winding up delimitation in J&K in a year, however was accorded extension in view of the global pandemic Covid-19 and nationwide lockdown imposed in India in the year 2020.

However the commission is yet to submit it’s final report to the government.

The Delimitation Commission has asked the associate members to submit their objections over the proposed report by Feb 14 after which the report is likely to be put in the public domain for further suggestions, hearings in Jammu and Srinagar, before the proposal is approved. After the completion of the delimitation exercise, the number of Assembly seats in Jammu and Kashmir will go up from 83 to 90.

What completion of Delimitation mean

The completion of the delimitation exercise in the erstwhile state of Jammu and Kashmir is considered to be a go ahead signal for the resumption of the political process in Jammu and Kashmir, paving way for elections to be held in the Union Territory which has been under Centre's rule since June 2018.