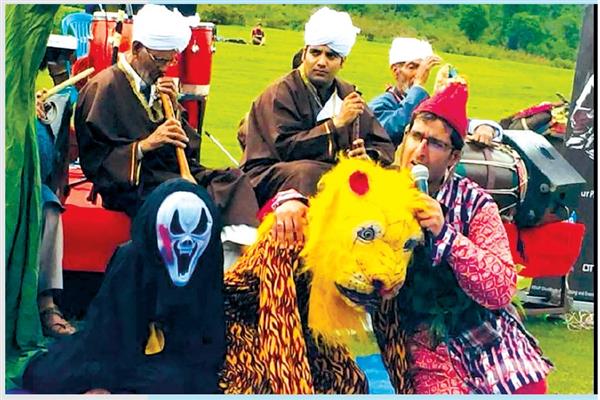 Rayees Wathori was merely seven years old when he started to perform as a theatre artist in the Manisha Folk Theatre in 2005. 28-year-old artist is now doing full time theatre and is attempting to fuse Kashmir’s traditional folk theatre with modern theatre.

Rayees’s real last name is Bhat, but he chooses Wathori as his pen name after the place of his birth, Wathora, which is a small village in central Kashmir’s Budgam district. For eons, Wathora has been an epicenter of Bhand Pather in the valley. Troupes from this place would roam the valley and perform satirical skits called the Pather in every nook and corner of Kashmir.

His grandfather used to play Sarangi in one such troupe of the Bhand artists but his father did not choose to take part in the family profession due to bleak monetary prospects.

“My father did not choose to go into the folk theatre due to the bleak future that it represented, but the gap that was left by him, I tried to fulfill on my own,” Rayees adds while speaking on his choice to continue the family heritage.

Rayees has not stopped at merely continuing the family heritage, but rather introduce changes into it as well. He has P.G. Diploma in folklore and cultural studies and has received formal training in stage crafting in modern theatre at Actors Creative Theatre of Srinagar.

“Before joining the Actors Creative Theatre, I did not know how to even point the face towards the audience; I would simply sway and swoon as the traditional Bhand Artists do, but later I learned all the theatre techniques and was impressed by them. I thought why couldn’t we introduce these techniques to the Bhand Pather and that is how it all began,” Rayees adds on the genesis of his revival mission.

Band Pather (Bhand means Artist, Pather means Drama) has a rich history in Kashmir and according to historic accounts, the folk theatre is nearly 2000 years old or more. Be it Kalhana or Abdhinav Gupta, everybody has mentioned it in their writing.

Rayees was born in a family that has produced some legendary artists like qawwali singer Mohammed Khalil, humourist Ghulam Ali Majboor and TV & theatre artist Bashir Kotur. All of them have, however, stuck to the traditional conventions of the Bhand Pather, except him of course.

A unique introduction that he has brought into theatre is Protest art. It’s a form that involves protesting by way of a theatre act.

“Before the government passed the J and K reorganization act, I composed a protest song to protest the revocation of Article 35-A. By leaving the violence behind, the protest art involves expressing your dissatisfaction through art,” Rayees says while speaking about his protest art.

He says that his protest performances have always been welcomed by people and they feel that I am speaking on their behalf.

Through his protest art, Rayees has raised awareness about various social causes including the environment, gender equality, laws, and government reforms. During the Kathua rape case, Rayees protested by cuddling a doll to draw the attention of the administration towards the gruesome murder and rape.

In 2018, he highlighted the problems of farmers whose land was being acquired by the government for Ring Road construction at low rates, in his signature protest art form and it became the talk of the town. He sang an emotional song showing how the acquisition of their land would have a devastating effect on the farmers and eventually, the issue was resolved.

Pertinently, Rayees’ revival mission has opened a niche for the women artists in the theatre as well. Since, in the traditional Bhand Pather, roles were pre-defined and only men could play them, the women, who often accompanied their male family members to their performing trips across the valley, were never allowed to play any role. Even the characters of the women were also played by the men in the traditional Bandh theatre. However, since Rayees is trying to revive the Bhand Pather, the women may be able to take part in the theatre down the line as well.

“Though my plays tend to be in the genre of modern art, I still make sure that they have a signature Kashmiri form of our traditional folk theatre. We cannot lose our identity for the sake of revival,” Rayees adds further.

He has done over 100 street plays all around Kashmir and he feels that his greatest achievement is that he has garnered praise everywhere.

Rayees says that people should feel that what you are portraying in a skit is their own story, only then can they understand what you are conveying.

“You can’t overload people with philosophical high points because that they won’t understand it. The best part about the Bandh Pather was that everyone understood it, and that is what I am trying to bring into our modern theatre; translate the higher points and deliver them to the common people.”

Rayees is often employed by the administration to deliver the messages of the government. When Jammu & Kashmir RTI Movement engaged him to help disseminate the information to the public through street plays, the founder of the RTI Movement Raja Muzaffar Bhat said “what we cant do in our hours of speech, Rayees accomplishes in just a few minutes of acting."

Unlike the traditional Bhand artists, Rayees and his fellows do not always seek the help of the percussion instruments. Sometimes there are sensitive issues like sex abuse which do not go well with the music.

Similarly, since the modern theatre does not have Maskhar or a jester, which is the main part of the Bhand Pather, Rayees often tries to play the jester in his acts.

“I always try to be a jester because it makes people feel that he is their own. I played a jester even in an English play, where it has never happened,” Rayees comments as to how his new art form is a fusion of modern theatre and traditional Bhand Pather.

For his work and dedication, Rayees has received various awards, including the Ministry of Culture award, Jammu and Kashmir Saqafati Markaz’s Young Personality Award, and many others. He has also won the Kashmir Got Talent in the acting category and is an approved Radio artist. He has also played a cameo role in Salman Khan starer Bajrangi Bhaijan.

In 2018, Rayees was offered the job by North Zone Culture Centre as a local facilitator but later on, the offer was withdrawn. Rayees is deeply troubled by the bleak prospects of the artists in Kashmir, the Bhand artists in particular. Though Rayees has given most of his life to this art, he is surviving on the edges. He has recently got married and making two ends meet is seeming a mammoth task for him.

“The Bhand artists used to survive one way or the other way in the past. People used to support them, but now, things have changed,” Rayees adds while lamenting the lack of support for Bhand artists. “Though I am doing good at the moment; probably I am the only one who is receiving the most of the gigs amongst all the Bhand artists in Jammu and Kashmir, yet I am not hopeful. Because when I see our senior artists who have given their whole lives to the Bhand Pather, struggling to survive, I feel that maybe it would be the end of me as well.”

Rayees feels that he is in a catch-22 situation. Though he can't live without his art, he can't survive with it. He has two more siblings and both of them have chosen different vocations.

Rayees feels that Bhands have not received due appreciation from the people of Kashmir as well. Rayees feels that his tribesmen have always been looked down on and have been treated as if they are the children of a lesser God.

At his Tulkul Arts and Media Collective, Rayees tries to teach the younger people the various forms of art and methods of acting. However, he is aware that in a few years, the youngsters will get to know the bleak prospects facing them and will give up halfway. Rayees recalls how once a senior theatre actor barged into his workshop and after catching hold of his son, advised him not to take up the profession of performing arts if he wished as much to have a normal life.


The members of the Bhand community have been complaining that none of them have ever been appointed to any of the 266 posts in the government-owned Jammu and Kashmir Academy of Art Culture and Language, and as result, their art is overlooking an oblivion.

With Bhand Pather losing its takers, and those few who are involved in the profession living over the edges, the traditional art form of the valley may lose its relevance soon. Unless there is a miracle that all of us devise together.